Urge to resign all games

Hey, fellow correspondence players. Do you ever get an urge to burn it all down and resign all your games?

Yep.
I did resign a bunch last month.

I’m still here, so other than temporarily tanking your rank, I don’t see any other downside.
I find purges good for the soul.
(wait till Monday, it might be the fever tho)

You have too many correspondence games. I try to keep it below 10.

I know the feeling. I had over 60 once. It sucked and I mass resigned a bunch of them. I think the reason why it sucks is because you can’t focus on a single game enough when you have so many, and most of your opponents are just cheating with the analysis tool, which gives you a disadvantage because you don’t have the time / patience to do the same. It amazed me at first how DDK players could read out the most amazing sequences, but then I figured it out.

Maybe I will keep playing 23x23 via correspondence.

Hey, fellow correspondence players. Do you ever get an urge to burn it all down and resign all your games?

Have done it before

No, I have never felt that urge. However, I have regretted playing the 9 games in the mod tournament. It takes away too much of my precious reading time, and it feels like work. I think all I can handle is about 4 games at once. I used to fulfill my desire to play mainly with IRL games on Saturdays, which I greatly prefer to online play. I’m hoping this dystopian nightmare will end someday so we can get back to a semi-sane world where I can play in person again. I am blessed to have several clubs near me.

I usually end up resigning in most of my games - it is the most possible result - so I never felt the urge to mass produce the whole effect. Overall that is my attitude on this issue: 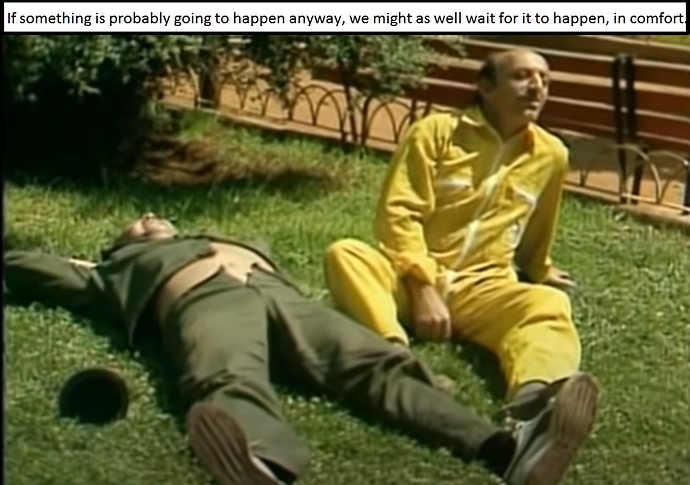 Although my last few weeks were quite intense, Go-wise… My ideal number of correspondence games is something between 20 and 30, but due to several of my tournaments starting their second or third round, I was up to about 45 recently.

Definitely too much, and many of them had tight time settings (+5h per move), so I felt stressed out and was glad about each game that ended. It’s slowly getting better; I’m down to 35 games now.

but due to several of my tournaments starting their second or third round, I was up to about 45 recently.

This was probably a factor to me. Sometimes you look forward to having less games and then 10 more start out of nowhere, like in a title tournament that takes many years to finish. These were normal correspondence though for me, not fast correspondence, so it was really the sheer number of games and just generally being tired of playing and making lots of moves daily.

I definitely have been frustrated with correspondence lately, and I only have 19. I came close to resigning all of my games earlier this week as well.

I ultimately decided to just use vacation and take a break. If it still feels like a chore to make moves when I get ready to turn vacation off, I may end up resigning a lot of them.

yeah some people wait until the very last hour to play so you are just waiting and waiting.

Yes, often. But then at some point I get sad that I’ve no moves to play, which can lead to joining tourneys or starting games and the cycle begins again.

Several years ago I resigned all my games because I felt I needed an extended break from the game. (I think it lasted for about three months.) It was only half a dozen games or so, but the go experience just felt demoralizing at the time.

But then at some point I get sad that I’ve no moves to play, which can lead to joining tourneys or starting games and the cycle begins again.

But sometimes i’ve felt that i’ve had too many of them, and i should prolly just resign bunch of them. Its exhausting to keep up with tens of corrs for years, but you know, i dont wanna give up with the games after wasting so much time and effort into them.

It’s similar to high-place phenomenon or call of the void where you’re at some high place and want to jump off suddenly.

Yes, been there, done that.

I’ll never join certain types of tournament again. You’re into it when you have time, forget about it and then half a year later boom 10 new games to care about.

I dont think I’ve resigned games if I know I am ahead, but I’ve definitely gone “screw it” and resigned games that are potentially winnable just to get rid of some.