because the online-go server is so really awesome, I took some time & energy to find, describe and report bugs, and I would also like to propose some improvements.

###1d)
Add a “help” or “?” button (just next to the already existing “create” and “play” buttons) that shows a little pop-up with a short legend of what the colours and shapes mean (acc. to “1c” above).

###1e) - Automatic Handicap and Komi Calculation, Color Assignment Strategy:
What komi will the server calculate if I specify in my game challenge that I am white (instead of “automatic color”), but then the black opponent turns out to be stronger than me? (or I select black but the opponent is weaker)

Will white get more than 7.5 komi in this case? Then this becomes “non-standard”! Probably it is better when the pre-specified color gets ignored in this case by the go server, to avoid such a strange situation.

Then the dialog in the game challenge for color should be labelled “Your PREFERRED color” instead of “Your color”, to respect the fact that under certain constellations like the one above the system will have to ignore your preferred color to do komi/handicap settings appropriately and respect the general GO rule that the weaker player plays with black. To get handicap/komi bonus.

A help text (like the help text for “Private”) for the “Preferred Color” settings field could read: “If you play against a stronger [weaker] player and handicap or komi (or both) is set to ‘automatic’, then the server will force your color to be set to Black [White].” 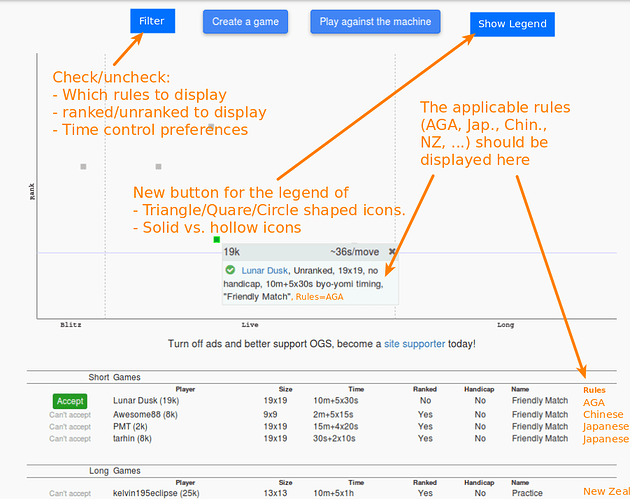 ###2a) [!!] Challenge Pre-sets:
Allow the user to specify a certain number of challenge “pre-sets” that are easily selectable in the challenge dialog window.

For example I have 3 sets of preferences for my favorite fast/slow or large/small board game settings, and I want to access them readily without the error-prone and tedious procedure of setting each individual parameter.

Preferably, there are three new “load/save/delete presets” buttons in the challenge dialog window: 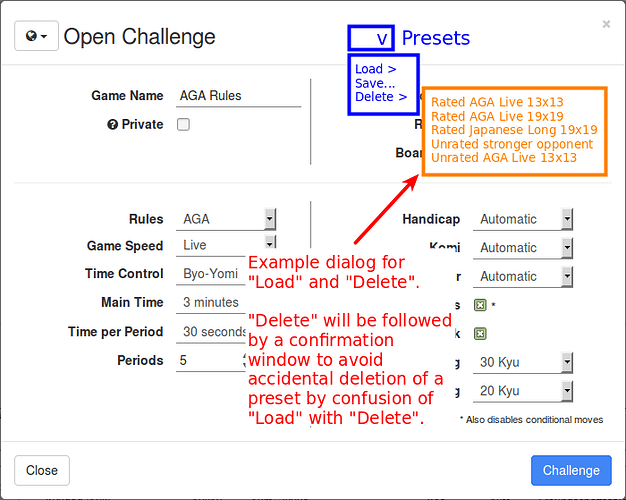 cqrpxYM.png700×559 52.9 KB
###2b)
Add an option in the game challenge dialog window that if this game is accepted, then all my other open game seeks are cancelled (or at least “paused”) immediately (such that I don’t suddenly find myself with having to play two games simultaneously, which is undesired esp. for Live/Blitz). 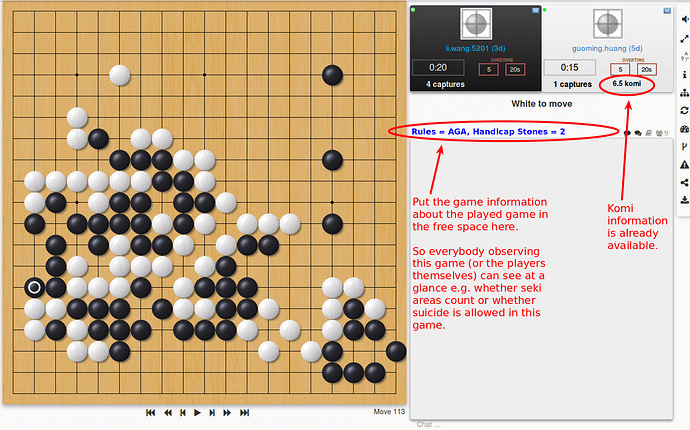 ###4a)
When a player passes in a game with AGA rules, increment the opponent’s captured stones count acc. to AGA rules (“pass stones”, “http://www.usgo.org/aga-concise-rules-go”, point 7).

Note: AGA rule’s “3rd pass stone” in case of “white passes first” does not need to be implemented because the final scoring is done by the “online-go.com” server using AREA scoring.

###5a) [!]
In the Game History, save the players’ ranks and ratings as applicable at the time of play. This gives a better impression of what the balance of forces was like at the time when the game was actually played! This is better for documentation and to understand how rating was adjusted after each game based on each player’s ranks, the handicaps & komis and who won/lost.

###6a)
On “https://online-go.com/docs/go-rules-comparison-matrix” there are separate columns for Japanese and Korean rules. But they are 100% identical everywhere. So either merge them to one column (smaller table with less redundance eases reading), or add another line on that aspect by which Japanese and Korean rules differ (personally I don’t know what the difference between Korean and Japanese rules is).

###6b)
On “https://online-go.com/docs/go-rules-comparison-matrix”, re-order the columns to have similar rule sets next to each other, this eases comprehension:

Note: Consider this ordering (instead of alphabetical order) also in the drop-down menu in the “create game challenge” dialog window.

Some of your ideas are already there and some of them are even worked on. You can vote for them and try to rally votes for them in chat/on the forum.

I would very much welcome some work on the Graph (I think this is the critical feature that needs most work on, because it is basically the first thing new user sees and it has more potential). See https://ogs.uservoice.com/forums/277766-online-go-com-suggestions-and-feature-requests/suggestions/7361422-improved-and-readable-games-graph for my old ideas.
The problem I’ve encountered later is that the symbols need to combine when there are more challenges open on the same point. This could make things more complicated and reduce readability.
Using shape coding is a splendid idea. We should work out absolutely necessary information that should be presented in the Graph.
However, I’ve found little love for the Graph in the hearts and minds of other people which is a pity, because a good graph conveys information quicker than a table.

Is there any way to see the ruleset of a challenge before accepting it ? If not, I feel that it is a really needed feature.

When you click an open challenge in the graph you get a “pop up” of the game information. It shows the rules. There you can finally accept the challenge.

Sorry for the lack of precision, I meant the scoring rules (japanese, chinese, …)

You are correct. It seems it only shows time settings and they are confusingly named almost the say way as scoring/rules. My bad