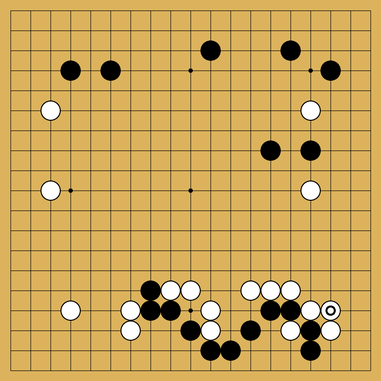 This game wound back about 7-8 moves. We had played out about 7 or 8 more moves earlier today, but somehow this game had wound back when I checked it tonight.

See the chat in game.

Happened to me too

weird thing is, there was no backup plan annoucnced.

We both had passed and the game was in the scoring phase. The game history does not show the passes, so they seem to have been erased.

I’ll be investigating today, there was no backup event or anything else that should have caused this

On an unrelated note, has anyone seen any groundhogs lately?

It rewound to a point where it was my opponent’s turn, and they actually played a different move. Then, I logged in to notice the issue.

We have not played any more moves and have left the game paused in order to preserve the game state (if that might help with any bug investigation).

I’ve already called a moderator yesterday (razza99) who forwarded that to you anoek. Since it happened about the same time, I thought I’ll mention it here. Maybe someone else has this issue too.

jthats frontpage, my frontpage and the game

Hi, i have another case of this: https://online-go.com/game/12068809 . I played the move at q13, my opponent responded, and we got set back two moves, and played them again (same moves) , see comments in chat.

I can’t tell if anyone has raised it with @anoek yet … so I’m starting that process with this post.

Sry, I should’ve mentioned that I’d invited anoek to this thread already

I had this phenomenon also, in two of my games at the same time. One wound back some six moves, the other only two. See game https://online-go.com/game/view/12291121 for the time it occurred and the chat about it.

I’ll be investigating today, there was no backup event or anything else that should have caused this

How should people affected by this bug proceed? Currently, we have left the game mentioned in the first post paused, in case that might help preserve state and keep things easier for any bug investigation. However, I have not heard back from anyone regarding this issue. Is it alright we just resume this game?

Hey, If you want to finish the game, it is certainly okay.

who knows if we ever figure out what happened

thanks for the consideration, and sorry about the trouble.