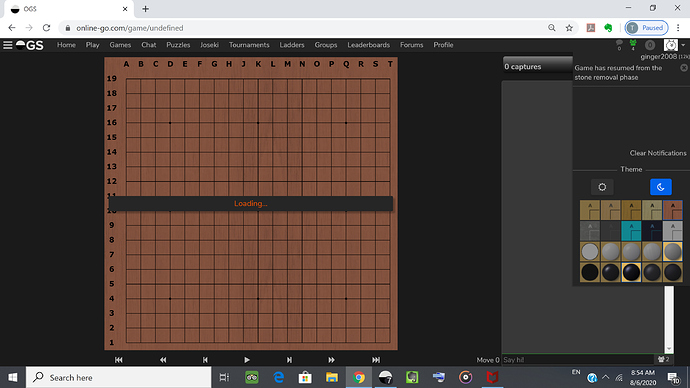 It says : “game has resumed from stone removal phase” and when i clicked on it this is what happened. Never finished loading.

Does it repeat the same if you reload the page and do it again? 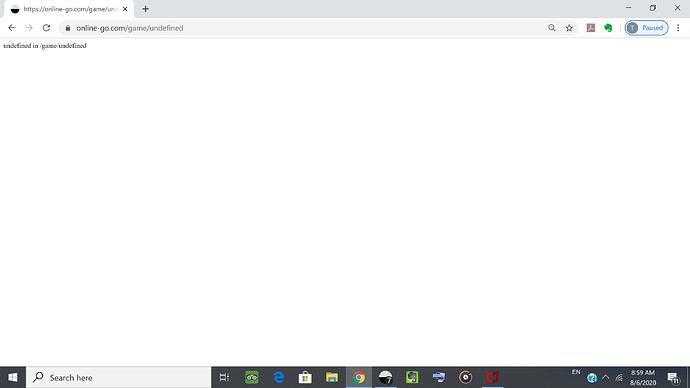 Then it repeats all over again.

Do you in fact have a game that has come out of scoring, showing on your home page?

Or is this mysterious alert alerting you about something that does not in fact exist?

Nah. Not a single. You can check if you want.

If it’s not too irritating, how about leave that notification there (if you haven’t already dismissed it) and see if @anoek can spot what was going on.

Doing so, even though i can’t stop myself from thinking i got a notification.

Do you in fact have a game that has come out of scoring, showing on your home page?

Nah. Not a single. You can check if you want

I just did. I found the game that this problem occurred in. It was an ended game, not a game that is currently ongoing(so slightly different, Eugene)


It appears that there were two passes in a row, but the result was w+resignation. What probably happened is that kingkaio passed, and then decided to resign instead of letting the game end by however many points it is. The way one has to do this is to hit the “cancel and resume game” button, and then hit the resign button because you can’t resign during that phase. You probably received the notification when he resumed, and then the game ended without you realizing that this happened in the game.

The bug with that notification has happened to me a few times, and I am sure others too. It takes you to an undefined game and doesn’t load(probably because of that).

Nice work. Some sort of bug there. I wonder if it would reproduce if the scenario @Haze_with_a_Z describes is run again…

Want me to try? I have a game that I lost and is in the passing phase.

Could you find out why it will become “undefined”? @Haze_with_a_Z will be a great help. I will do a test with my “Lab Rat” account.

It’s recommended to perform any tests on OGS beta https://beta.online-go.com

Want me to try? I have a game that I lost and is in the passing phase

I screen recorded myself doing this. I would have to remove the end bit of the video, but I could show this if desired. Please tell me if you want it, and also how to upload it. I don’t know why it takes you to a undefined game, I personally think it should take you to the game that it happened in.

Thanks! I think suffice to say that it is reproducible @anoek

Edit: Actually, can you raise a bug report.

I can’t upload the video.(Trying other ways.)

Well I don’t know how to get it to cut those 8-10 sec off of the end. That part is really unneeded for the actual video. I think it is pretty self explanitory to get through it, but in clear step by step format:

If you click on the notification, it will take you to online-go.com/game/undefined. This is just a 19x19 board that won’t load. It turns out that you can also send chat at this point, although I don’t think it will go anywhere. You can’t see this chat either.

If I was unclear in any of my discriptions, please tell me and I will change them. Hopefully this gives you a pretty clear play by play without an actual video.

Yes, this happens when game resumes from stone removal, and is then finished later, you will get weird notification that leads to /game/undefinied

: yet another new bug: if game resumes from stone removal phase, the notification for that is directing to https://online-go.com/game/undefined after the game has finally ended
[22:31]

: fix: automatically remove notifications about game resuming from stone removal phase when the game is indeed over