What constitutes a stronger opponent?

I play opponents a rank above me and they still count as a win/loss against a weaker opponent? I’m pretty confused as to who would be a stronger opponent.

I’m curious about this one too, specially since I play correspondence games which usually last for weeks and sometimes both my rank and my opponent’s change. In this case how does the system recognize weaker or stronger opponents?

I play correspondence games which usually last for weeks

how does the system recognize weaker or stronger opponents

They told me it’s the snapshot at the end of the game.

Thank you, I guess that makes sense as players evolve through the entire duration of the game and they can still keep playing other games simultaneously.

As far as handicapped games I’d assume that those are considered even in rank, so perhaps is a matter of calculating the difference according to the ranking system.

Someone in another thread said the opposite a while back: that is, that the rating at the beginning of the correspondence game is used to calculate the players’ new ratings at the end. I have no idea which is true.

I did an experiment and I believe it confirmed that the decision of weaker/stronger is made after the end of the game.

I tried one go of this just now, with two new accounts. The winner was deemed to have been stronger. This matches with my vague recollection that the decision (who is stronger) is made after the game. Note that it is extraordinarily rare for two equal ranked players to play each other. It’s the glicko number (rating) that counts for this, not the rounded rank (as smurph pointed out).

I can see now that I was addressing a slightly different question. Is the rating calculation at the end of a correspondence game based on the players’ ratings at the start of the game or at the end of the game?

According to my experience, it seems the latter one. 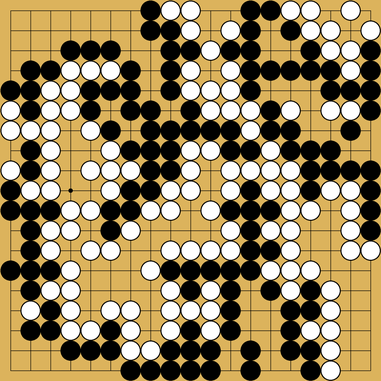