What does this guy know that I don't?

He clearly knows how to disrupt eye space and how to make eyes, but I can’t articulate how he’s doing it. There’s some kind of principle he’s using that I recognize, but I don’t know how to use it myself. 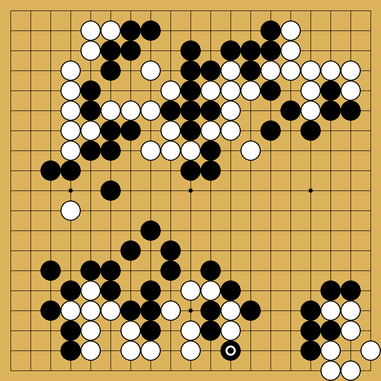 I am not much stronger than you but I feel that your groups are getting surrounded too easily and when it happens you can only claim a very low number of points for each group when they eventually live and your opponent gets the rest.

On the bottom and top right I just feel you changed your mind just after the invasion. At some point you invade and then you decide you want the corner. Then you basically just get that whereas moving to the centre (from the top right) and to the aside (from the bottom right) would feel better to me.

Concerning eye space I think looking at the AI review may help. Specially when it keeps suggesting the same moves for a long time. Play with it as both you and your opponent and see what happens. Tsumego may be useful here.

You are trying to build something on the side, going lower and lower. Then you tenuki too early, your group becomes weak and you need to spend even more stones to protect it while becoming fully surrounded.

You should try to build something useful for the rest of the board instead. Instead of trying [to create 2 eyes then tenuki], you should slowly run to the center, so group survives by becoming too high to be surrounded. And such group would be useful as help for other groups.

Added a review, from one DDK to another.

I think your main problem is direction of play: you tenuki positions that you really should not, allowing your opponent to surround or capture your groups.

Also, I noticed a life+death played wrong, and a ladder there that you played for way too long until you noticed that it doesn’t work for you. Go puzzles help a lot with that.

That depends a lot on where the ponnuki is, and the situation around it. Also, the value does not magically multiply just because you happened to capture one extra stone.
The ladder was bad, yes, but it was still manageable.

Besides, there are ladders that do not work but you want to push anyways, but that’s something to look into at maybe 7k and above

The source of your troubles, IMHO, is the two premature attacks early in the game. This is, I think, the most common mistake among DDKs, and I am still susceptible to it myself if I am not careful. D4 strengthened your opponent’s corner with little value to your position. Moreover it led to a series of necessary moves that were disadvantageous to you. Meanwhile, both of your corners still needed an enclosure. The other attack was move 38. The AI wanted you to play C13, creating an enclosure and helping the vulnerable lone stone at D9. Like you, I would probably have played in the lower right to prevent Black from becoming too strong there. But I would have played a conventional approach at R6. Your opponent would have gotten a large corner, but you would have gotten a base on the right. To answer the Black hane, you should have backed off as the AI shows. Your answer was fatally over-aggressive. At move 48, White is dead in the lower right if Black throws in at T2. At this point, Black has a lot of influence while White has three separated stones on the rest of the board. The game is already lost, as the AI evaluation shows.

Each rule has its exception but that’s not what to remember here. 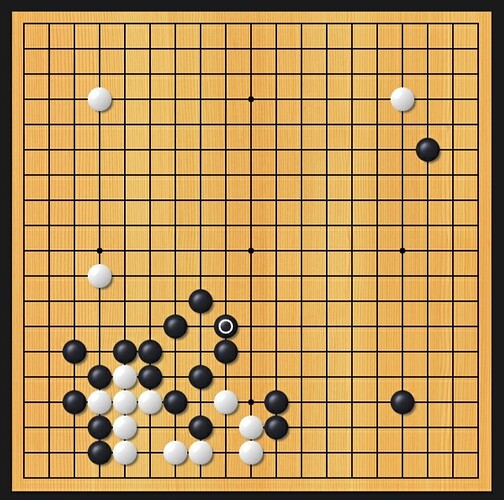 That capture is like a 50-60 points loss for white at least.
Black has a nuclear aircraft carrier now looking into the open seas.

From the very beginning there are a few to say

With this exchange my guess is you try to reinforce your group in sente (keeping the initiative) but the problem is that this shape has still a annoying weakness at X, it helps black to surround you, to go to the center and to be strong on the right. That indeed helps much more black as white. 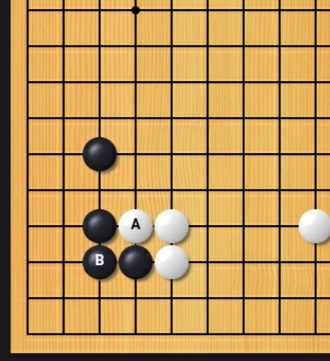 This next move, with the best black answer is not good. You gain almost nothing from it and black becomes more solid. For example the peep above A is now less effective.

It’s a difficult way but you need to think more with a few moves anticipation what you want to do and where you are going. Keeping options when you can. Launching something after considering the goodness of the result only. Fixing shapes with contact moves when necessary (defense) only. 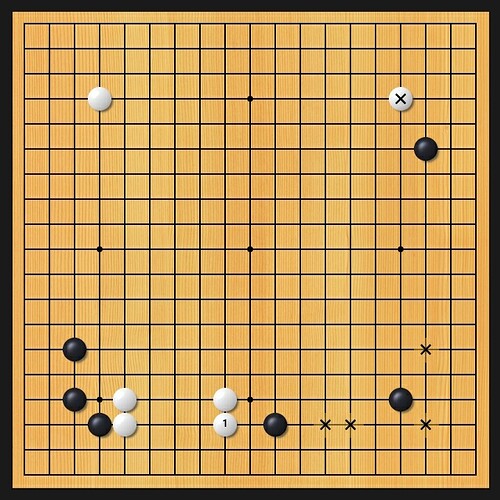 If you want to ensure eyes and a base 1 is the correct move. It’s less sente as the diagonal move but you still have future interesting options on the points X. You can feel It’s slow and you may be right, maybe there are bigger places to play now.

Could you talk a little bit about that ?
I see the AI keeps screaming about a couple of points inside the white group. I guess these are vital points/weaknesses…. But how to find them?

This is an inherent weakness in the shape. When black plays on x he threaten to connect under or to go out to the center

Your opponent looks strong for 11k. Could they know the holy art of bagging?

Many people say that whenever you see this shape with the 4 stones anywhere on the board, you want to have the 2 black stones forming solid extension for yourself. Locally there are more weaknesses against whites stones than against black - not only the marked move at X but pretty much every placement around these 4 stones creates stronger shape for black than white.

I heard a rule-of-thumb that each move extending a not-working ladder loses 7 points (that goes for the attacker as well as for the defender). I can’t find a reference for that though.

To answer your question - Up to move 24, your partner has discovered you want to defend the side group, and is encouraging you to do what you want to do

- to their own advantage.
This is the psychological side of Go which is as interesting as the moves - and applies in many other situations in life. Regards, egb