I am about to start the 8th book in the Expanse series. It is great science fiction and there are a few references to go. You can get more details at https://en.wikipedia.org/wiki/The_Expanse_(novel_series)

I am reading Geert Mak’s Grote Verwachtingen in Europa 1999-2019. (Great expectations in Europe 1999-2019)
It is a book on Europe’s recent history as observed by Geert Mak when travelling through Europe. A fascinating story on Europe’s social / cultural / political / economical struggle to become one. 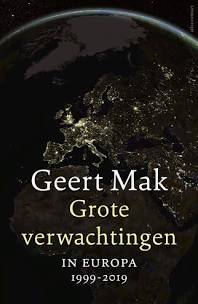 I finished “Passenger” by Lisa Lutz a few days ago (can recommend it!), and now I’m reading “Unorthodox” by Deborah Feldman and “Spark Joy” by Marie Kondo (laugh about it if you will, but I feel I really benefit from her methods).

Kolyma Stories by Варла́м Шала́мов. You can read some of them here:

This is the best literature ever written in Russia in my opinion. It even surpasses the golden age of Пушкин and other great authors.

I’ve heard of the Kolyma Stories, but haven’t read them—I’ll have to look into them. Russian literature is the greatest gap in my reading. Ironic because I began my adult reading with a large number of Chekhov short stories at about age 9. My parents told me I was wild about him, though I now remember nothing of the stories.

A few years ago I began filling the gap. I was hugely impressed by Tolstoy’s novelettes, especially “The Death of Ivan Ilyich,” and by Turgenev’s Hunting Sketches. I’ve also read a couple Turngenev plays and a collection of Sologub’s short stories, including the classic “In the Crowd.” As noted in a previous post, I also have high regard for Gorky’s short stories and autobiography. On the science-fiction front, I am a huge fan of the Strugatsky brothers. In addition to their Roadside Picnic, Definitely Maybe and Hard to be a God are not to be missed. And I still consider Zamayatin’s We to be the greatest dystopia ever. Not very much, I’m afraid, but I am looking forward to several volumes at hand.

Oh, yes, and how could I leave out the great One Day in the Life of Ivan Denisovich, which I have read twice…

I am reading “The Light of All That Falls” by James Islington. It is the last book of the trilogy and even though I dislike plots with predestination this series is so masterfully done so far that not only has made it tolerable (because the characters fight against “fate”), but also made it suspenseful because noone in the book is really sure if what they are doing is working or not. Who are the good guys ? Who are the bad guys ? NOONE knows as the series progress and that is very cool.
Add to this:

If you like fantasy books, I really recommend it

(plus from the second book and on I noticed that there are glossaries at the end, and a summary of the previous books at the beginning which is very good and thoughtful)

On the science-fiction front, I am a huge fan of the Strugatsky brothers. In addition to their Roadside Picnic , Definitely Maybe and Hard to be a God are not to be missed.

I recently read their “Doomed City” book and I found it very good (the translation was also excellently done). I will definitely keep an eye for these titles you mentioned

Strangely I have not read One Day in the Life of Ivan Denisovich yet, but I did read the Gulag Archipelago. Also a masterpiece. Osip Mandelstam died in a Gulag transit camp.

If you like that sort of thing I can also recommend:

I haven’t gotten around to Stay Alive, My Son by Pin Yathay yet but it is on my todo list, along with Dr Zhivago (Boris Pasternak). I believe the movie “The Killing Fields” was also based on a book, which I haven’t read.

About to finish (in one or two days) “Too Much and Never Enough: How My Family Created the World’s Most Dangerous Man” by Mary L. Trump

Too Much and Never Enough

In this revelatory, authoritative portrait of Donald J. Trump and the toxic family that made him, Mary L. Trump, a trained clinical psych...

Just last week, I finished Baudolino by Umberto Eco. It’s about a young Piemontese boy who enters the service of Emperor Friedrich Barbarossa. His talent is a vivid imagination, and as long as he tells fables, he fares well, but his fortune changes for the worse when he rctually tells the truth.

Now I read Greek stuff again for my M.A.: Daphnis and Chloe by Longus, True Stories by Lucianus, The Bacchants and Hippolytus by Euripides, Books 6 and 7 of Herodotus’ Histories.

I am reading a book called A Theory of Fun for Game Design. Although probably not the best in describing why we played video games, but from the board game perspective it actually makes more sense.

A Theory of Fun for Game Design

A Theory of Fun for Game Design is not your typical how-to book. It features a novel way of teaching interactive designers how to create ...

Oh, that’s good! If you can find his “Dialogues of the dead” (or as I like to call them “deadly dialogues” due to the author’s razor sharp wit

) and his “Timon the Athenean” give them a try, they are amongst the best books ever written (especially Timon is still so relevant that it is hard to believe that it was written almost 2000 years ago )

Yeah, he’s a blast. Did you know the story of an Egyptian magician’s apprentice who tried to fiddle with the spellbook when the master was away? He made the broomsticks walk around and carry water until the place got flooded.

I am in between books at the moment. After a book has been your faithful companion for a few weeks, it feels a bit empty right now.
Don’t know what to read next. Rereading a book, trying something new?
Staring at my bookshelves hoping for inspiration or going to the bookshop?
Serious or easy digestible?

I’ve started “The catcher in the rye” by Salinger. I feel a deep sympathy towards the main character and I like the dirty, direct syle of the narrative. So far it’s quite uneventful, but that’s part of its charm.

Have tried to read it, but was not able to finish it, because the fatality of that complete loser made me nauseous. Found it a very depressing book (as far as I have read it).

That is “The Sorcerer’s Apprentice,” widely known because of the Dukas’ symphonic piece and the Disney adaptation in Fantasia. I knew that Dukas based it on a Goethe poem, but did not know about the older source. Thank you!

I hugely liked Eco’s The Name of the Rose and bought (used) several of his other novels, but haven’t had time to read them yet.

Nice to find a fellow enthusiast for classical literature, and I admire your academic pursuit of it. I have read ancient works all my life (only in tranlation), usually histories and other nonfiction, but I really enjoyed the Argonautica and, last year, The Golden Ass. I’ve taken note of the titles you mentioned. I think Daphnis and Chloe is in an omnibus of six ancient Greek novels that I have.

Ditto to you my comments to Sanonius. Delightful to find fellow enthusiasts. I am often amazed by the modern quality of ancient writings. I felt this most strongly in the Letters of Pliny the Younger, especially when he was talking about lawsuits. And when Tacitus talks about the economic crisis of AD 30 (or thereabouts), I was impressed by the similarity to modern troubles.

Did you know the story of an Egyptian magician’s apprentice who tried to fiddle with the spellbook when the master was away? He made the broomsticks walk around and carry water until the place got flooded.

I wasn’t aware of that one! Lucianus wrote that as well O_o

I felt this most strongly in the Letters of Pliny the Younger, especially when he was talking about lawsuits.

Thank you for reminding me that I have to locate those eventually. I remember that someone told me that they are a good read, but I never got round to finding them.

And when Tacitus talks about the economic crisis of AD 30 (or thereabouts), I was impressed by the similarity to modern troubles.

It goes to show that despite the technological advances, our societies and our interactions with one another do not really follow that upward progress with the same speed.

In the same manner, though it is by no mean an “ancient” text, I was amazed to find that a speech written by Andreas Laskaratos around 1850 about the economic crisis (and subsequent collapse) of his home island of Kefallonia, titled “Kefallonia is destined to be vanquished”.
What he described within those few pages ( people living beyond their means, over-borrowing of money, the mistrust between the lender and the borrower, the damage made to the agricultural products, the mistakes of the lawmakers and the general lawlessness of the situation) were eerily similar to the modern crisis of the whole Greek country.
Also similar were the solutions he proposed and that could have worked today (returning to a more lawful environment of fairness and respect for each other, reducing favoritism and a return to meritocracy, not spending money that we do not have on thing we do not need and so forth, if I remember correctly).
Also similar would be the reaction to such solutions (he was laughed off the island’s parliament as a lunatic) if anyone proposes them now.

Sadly the text is only in Greek, but I’ll try and locate the speech and translate it when I have the time so that you can see and judge for yourselves.

Player of Games - by Iain Banks

The Player of Games

The Player of Games is a science fiction novel by Scottish writer Iain M. Banks, first published in 1988. It was the second published Culture novel. A film version was planned by Pathé in the 1990s, but was abandoned. Jernau Morat Gurgeh, a famously skillful player of board games and other similar contests, lives on Chiark Orbital, and is bored with his successful life. The Culture's Special Circumstances inquires about his willingness to participate in a long journey, though won't explain furth...

Well, re-reading actually. I’ve read it a few times before.

I am a big sci-fi fan, and a great fan of the Culture series (far future where humans are functionally omnipotent and our society is ruled by superintelligent AI).

The character in this book has to learn a huge, complex new game, and many of those descriptions mirror my experience discovering Go to an uncanny degree. Also tries to get at the heart of what our games say about us (i.e. our need to win/dominate as well as empathize/learn from our opponent).