When a Go player tries Chess

Figured this would be the category to post a non Go gif.

This about sums up my experience with Chess so far…

If you spend any time on it, you’ll quickly reach 2000-ish. Once you get used to pieces. Strategic go thinking is just that powerful. See, yeah, you missed a tactic, but the good idea of pressuring opponent with the passed pawn is there. I mean, checkmating opponent might’ve been good too, but that’s just the matter of preference. 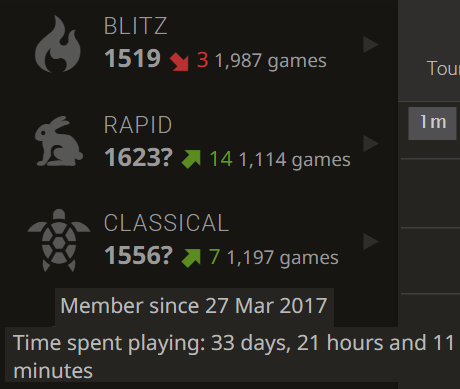 Mmm, but I mean, you aren’t exactly as strong as Clossius at go. So naturally the results are more humble.

But I’m also currently your only data point~

I’m currently around 2000 on chess.com, and 2100 on lichess. However, this isn’t really a reliable gauge of how well go players play chess, since I’ve played both since childhood. 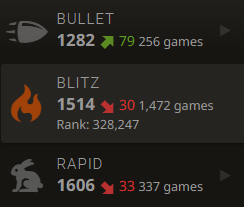 I certainly believe I could reach 2000 lichess with dedicated study (no idea what timeframe would be realistic), but the above shows how my progress looks like “without trying” (only playing fast games, not spending much time practicing tactics, not doing any serious reviews of my games). So unless I decide to take chess more seriously in the future, I might never reach 2000.

I’d make a wikipost table where we compare our chess and Go ranks, but I forget whether you have to be a regular to do that.

This is now a wiki have fun 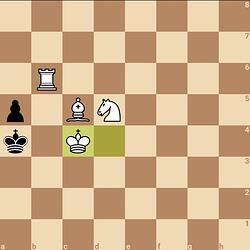 I fall for the stalemate every time. This very concept is just too bizarre for a go player to think of.

Are you still in contact with Jonathan Schrantz? Because when you teached him Go he was asking about agressive play in Go.
Would my games be by defintion in Go?
Are you planning to do something with him or other chess players again?
I would volunter to be the trainign partner

When a go player tries to play chess, you would expect that player to place the pieces on the coordinates (and not inside the boxes).

I would love to see how far I could get in chess or shogi by only playing games and doing tactics, but I just can’t bear the thought of putting in all that effort only to regret I hadn’t spent it playing Go instead.

You would progress slowly and you wouldn‘t get very far. It‘s like with any other sport: Guidance and input from strong players do make a huge difference.

If you spend any time on it, you’ll quickly reach 2000-ish. Once you get used to pieces. Strategic go thinking is just that powerful.

I couldn‘t disagree more.
2000 takes A LOT of work. (And the later you start with it, the harder it gets.) Go-skills do help you very very little in chess. And vice versa.

Yeah 2000 you aren’t far from being able to teach it. Would be the equivalent of reaching 1d+? Presumably there is a way i could work that out if it weren’t 6am.

So the question is how much transferable skills does Go give you? And the answer to that is probably almost none, and mainly psychological (eg time management, self management under pressure). All the rest is mainly learnt pattern recognition which is totally non transferable and a bit of ‘lets look at some variations and see how to fit a wider aim’…

Agree. What you can say however: If someone is good at Go, there is a good chance he/she is talented and interested in picking up such games in general. Which is a good starting point of course.

This discussion has come up a few times before. I even made a thread with a survey.

The approximate increment over 2000 that can be translated into an extra dan is probably somewhere between 60 and 75.

Conversion in steps of 75:

This frankly doesn’t work, sorry to chime in like that. kyu/dan-ratings follow a fundamentally different skill hierarchy than elo. A two-stone difference in go relates to the required handicap for an even game, whereas a 200-point elo difference relates directly to a winrate, which is invariant to the absolute rank. You can see here that this does not hold up for a handicap-based rating system. The correlation of the two systems is just not linear.
In other words, a 1000 player has the same odds to beat a 1200, as a 2500 has to beat a 2700. In go, on the other hand, it is overwhelmingly likely that a 6d will beat a 4d, whereas 10k vs 12k has comparatively even win probabilities.
Therefore, if you translate elo into go ranks, the jumps have to increase with the ranks. If 2d is 60 points stronger than 1d, then 6d should be, idk, 100 points stronger than 5d, the exact number can probably be figured out by analyzing playing data.