When you play more than 60 correspondence games

Usually I spend like an hour or so for answering all the games.

When I submit answer for one game it gives me another. But I think the algorithm of determining of the next game to answer should be improved, because I’ve just get a notification that I lost one of my games by timeout at the time when I answer to my 30th game in a row. The algorithm instead of giving me a game where I run out of time gave me 30 games where I had more than a day for answering.

Maybe it is possible to rollback my lost by timeout in this game?

It makes me sad that I was ahead in the game, have no game lost in the tournament and now I disqualified

I think that there may be a bug in that some games are not giving alerts that it is your turn to move.

Usually there is a count shown of the number of games waiting for your move, but sometimes it has been my move, but no alert.

As your time to move runs down, these games still appear first on the Home page.

I always answer on alerts first, and then just go through the rest of the games, but I didn’t get any alert.

My preference for picking the next game would be as following:

I know notifications are sometimes unreliable, however that problem would be far less severe if it moved to the right game next.

I, too, play multiple corr games and agree that the “auto bump” feature did not work to my best interest in game succession based on time—that is, it prioritized games that were low priority to me.

I turned off that feature and I’m much happier just quickly looking over the list and choosing the next game that needs my attention, which works well even when I’m playing 20+ games. The couple extra clicks/seconds has become second nature to me now, and so much so that I don’t think I’d use Auto Advance even if it was tweaked. That said, if you like it and see a need to have it tweaked, I can relate bc it simply doesn’t work well for large-numbers corr games at this time, Alexander.

I’m not a correspondence player, so I’m generally curious why would you play 60 games at a time? I do apologise for dropping an off-topic post, you are free to choose any way of playing that you enjoy. However it seems to me that managing 60 games at a time cannot be frustration free.

I do understand people with limited availability running, let’s say 5-10 games at a time and occasionally dropping a move or two due to time limitations. However with 60 games in flight you must be spending significant portion of your days managing all of them. Why would you not spend the same time on playing a single game from start to finish is beyond my comprehension.

I am aware that, that I am biased. I consciously avoid correspondence games - playing Go for me is full engagement activity. I can’t count how many times I’ve burned my Moka pot while playing… Additionally, I find Go as continuous learning experience and to learn you need to be mindful and often review your mistakes. What I often do after a game is to spend 15-20 minutes looking for key situations to evaluate my judgement in the light of end results. I don’t think anything like that is even remotely doable in long running game, as all the context and mindset is lost and forgotten by the time you finish your game.

I’d encourage to try out and go for quality short-term experiences, but ignore me if you find it too off-topic. I’m curious what do you think?

JokesAside, I’ll answer with what I think

Beyond that, the number of simultaneous games is a decision based on how much we do want to play each day. If I was to play a single corr game with a simple move-a-day minimum clock, I could wait all day to play a move again (most people do play more frequently/faster than the clock allows, though, just like live Go). So, experience allows me to know the “flow” that works for my situation. When I play about 20 simultaneous corr games, I can click on OGS five or six times a day (when riding a bus, eating alone, waiting at the car repair shop, etc.), and each time there’ll be about one third of those games (6-7) waiting on my move.

If I was to play 60 games at once, there’d be about 20 games waiting for my move on average, so if I had blocks of, say, 20-30 minutes several times a day, I’d play 60 corr games (I don’t have that much time, though, so this is just an example). A person playing corr can answer one move, or four, or twenty, based on their situation at that moment (waiting at a red light, just answer one game…kidding!)

The other reason for corr games is that I can take a little more time with each move, especially in tricky situations, and lessen significantly the chance of opponent or me making a single fatal mistake; who wants to have a wonderful and close game blown by one or the other simply not seeing something and losing ten stones (sure, in live games, we can give a re-do, but we all know who “really won”…lol)? In my experience, this happens less frequently in corr games.

A quick final comment is that many think corr games lose the in-game flow, or become a “series of single move puzzles” rather than a smooth movement through the game, but I can tell you that, once played regularly, that just doesn’t happen…we click back five or so moves and the flow for that game is easily recalled. Remember, we are looking at that same game several times a day for a few weeks…we remember the game flow (especially when we’re getting slowly trounced…lol). We get to know our opponents in depth, too, since the game can last a good length of time. We can still fully review any game, start to finish, just like live Go. And, we get to simultaneously play beginnings, middles, and end games, so the daily variety is fun and challenging.

That said, I understand that some prefer the turn-off-the-cell phone, burn the coffee, the dog’ll just have to pee on the floor (!) world of full engagement Go. I do practice live Go occasionally when time permits (once or twice a week) just to lose the “crutch” of relaxed time to think so that I hone my club and tournament skills. Live play has definite advantages, too. Thanks for your question…feel free to ask or disagree with anything I wrote…this is just what works for me. Thanks.

Thanks for the mindful response. I appreciate that and I understand how people enjoy correspondence game. I do hope that the topic wouldn’t drift away too much because of my post. I did however have the idea that if someone has time to manage 60 correspondence games, then one could consider doing an odd live game or two from time to time and cutting the parallelism down a bit and trying some more focused Go time instead.

To go along with @Cool1, and a bit further.
I could have time for real time games (I’m retired). But I’ve come to consider that for me Go is a slow moving game. I play now only correspondence games (ladder), only a handful of them. And each one is like an unfolding book you read page after page everyday. At some point you can think about them without the board under your eyes. Mind you, I’m about 65 and learnt the rules of the game when I was 20. It was the time when Yasunari Kawabata published The Master of Go, and I was fascinated by this book. I think that gave me a flavor of the game as a story you take the time for. 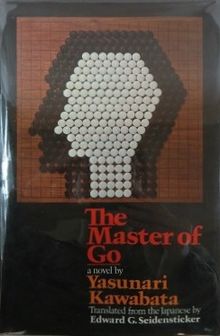 The Master of Go

The Master of Go is a novel by the Japanese author Yasunari Kawabata, who was awarded the Nobel Prize in Literature in 1968. The novel was first published in serial form in 1951. Titled Meijin (名人) in its original Japanese, Kawabata considered it his finest work, although it is in contrast with his other works. It is the only one of Kawabata's novels that the author considered to be finished. It is a semi-fictional chronicle of the lengthy 1938 "retirement game" of Go by the respected master Hon...