Where am I going wrong?

Is anyone available to review my last couple of games? 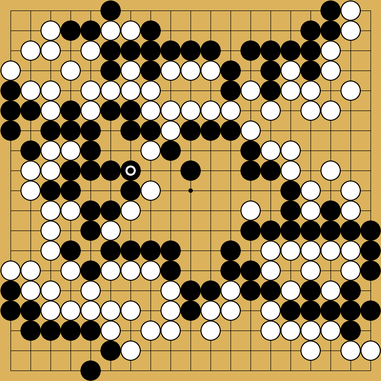 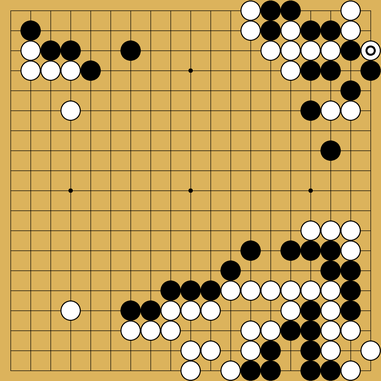 Did one of 'em. First thought you were black, but at some point realized you weren’t. As usual.

Thanks for the review.

I had a teaching game yesterday evening, in which I let a group live that should have died. So today I decided to practice taking away the base from groups. I’ve been trying to kill groups or make them run. Unfortunately, by ignoring the overall state of the game, this just caused me to lose a couple of games on OGS and a couple more on IGS Pandanet.

Anyway, I suppose it is all experience. I’ll try to go back to playing my normal game.

We can play the shape game sometime.

With regard to the first game (“OSR”) I’m going to give a very simplistic-sounding answer, but you’d be surprised how often this one factor ends up being the difference between winning and losing:

You prioritized fighting for middle territory rather than edge/corner territory. If you’d like to improve in this regard, focus on elements like

big internal moyos can be satisfying, but smaller side and corner moyos will beat them for efficiency every time

PS - I just re-read my post, and realized that you were playing white - I made the SAME MISTAKE as smurph up above!

I guess my advice is not very helpful in this context!

I’m not doing too well at the moment - just lost another game.

I get lost in the middle game. My direction of play is really bad.

OK, now that I have realized you were playing white in the OSR game above, let me back up and revise my answer.

Looking back from the end of the game, it seems to me that - had your false-eye group on the lower right side not been captured, this game would have been a lot closer and - you probably should have won since white had more corners and edge territory.

So what happened? You started off with the S7 peep on move 50. That should have been able to connect to your upper right side group, but you got cut off at move 56 because you had to cover at S10.

You did a really good job of running that group to the middle with moves 54-71, but then you did something that sort of confused me. Rather than continuing to run to the middle, you focused on creating a shortage of liberties for black’s lower right side group (moves 72-74).

IMHO, if you had only played a forcing move for move 74 (examples include N9, O9, M6, or even M8) then that group could have

Instead, black played M7, and even though you tried to fight your way out with N9, the group got cut off very soon afterwards. Since you now had 10 dead stones, you were 22 points behind by move 79. Even if you both played an aggressive/even game after that, you weren’t able to make up the loss.

So yeah, if your group doesn’t have guaranteed eye-space, make sure to fight and escape to the middle securely before reducing your opponent’s eyespace? (unless you have a sure-fire plan to kill/capture their groups that is…)

As re: direction of play - there’s so much there to understand that I’m still a bit lost in it, but my two rules of thumb that have worked for me are

It’s all going wrong for me today! Back down to 15 kyu.

Another game lost. I can’t seem to read anything.

Don’t focus so much on reading: just build strong groups and protect your cutting points. You seem to go all in on giant fights when you’re too weak to pull them off, lose big groups, and lose. If you aren’t alive locally, don’t focus on killing unless you know beyond a shadow of a doubt that you can do so and live.

Examples:
-In the first game, you tried to kill something that was fairly strong with a group that wasn’t alive. Instead, you could’ve just jumped out to the center and been fine.
-In the second game, your bottom group was partially captured. If that group had lived, even if you didn’t kill white’s dragon, you’d be in a fine position to win on points.

Neither of those were things I had to read out. You had obvious weaknesses, you didn’t defend them, and your opponent took advantage. While there are other weaknesses in your play (don’t worry, we all have them!), protecting yourself is the biggest thing I can see you can do to improve your game.

Dsaun mentions a couple of shape exercises at the end of his shape lecture. They are played with a strong player as black and a weaker player as white.

In the first, black is given stones on the entire first line and white tries to make a living group.

In the second, black is given six handicap stones and white has to make three living groups.

They better be Chinese handicap stones.

No, they were Japanese handicap stones in the traditional positions. He mentions that the first four moves are often on the 3-3 points. He also suggests that a strong player could place stones near the 3-3 to make life uncertain. Is this reasonable? It would seem easy to make life from a 3-3 stone.

Yea, with only 6 stones, living with 3 groups is almost trivial (if w 3-3, b can play the 3-3 on the diagonal, w gets one more 3-3, b does the same thing… and then it gets mildly interesting with the 3rd group.)