Why continuing the game although

Many times it occurred to me; someone who tries to skip his turn over and over even if the match is technically finished but he keeps bothering to escape and try to replace stones and you have to keep going so you wouldn’t lose due to “Time Out”

Why there is not kinda algorithm or an option where if some player dominated maybe 60% of the board, then he can finish the game directly without hassling?

Here’s a sample of what I mean 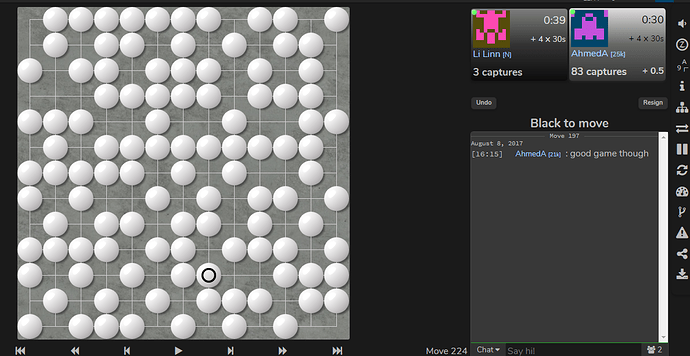 Next time that happens, you can click the call moderator button on the right hand side. The moderator can help you end the game appropriately. Its unfortunate that you had to go through that, but some players may not know the rules or proper etiquette.

[rant]
And I say this again. On Chinese Go servers there is an option of ‘force scoring’ if the number of moves exceed a certain, unrealistic amount. On QQ WeiQi this threshold is currently 375 moves on 19x19. By then the game will be forced into territorial scoring without consent of the opponent.

Leaving aside extremely small number of cases where a game will exceed 375 moves in a meaningful way, I strongly believe this kind of feature is the life saver that many players are looking for.

Let’s face it: moderators aren’t always around 24/7, they take time to process the query. Minutes if they are online, an hour if they are not. If OGS is to grow, it is inevitable that the number of incidents like this will continue to rise. I see no reason to not have this feature.

Just play against stronger players. They won’t do that.

You can find a behaviour like this when your opponent doesn’t yet understand the very basis of the game: eyes, life and death, territory…

Well, since your opponent seems to be a complete beginner I would rather suggest a calm discussion/explanation in the chat, rather than angry pushing of some magical button

He can’t learn, unless someone explains…

True if it’s always with absolute beginner, but it may be more frustrating if you face such a thing like that with some experienced players who just skip their turn over and over so you become bored and resign and then they won!

Plus, you’re not always in the mood of explaining and discuss with others and having an option to auto score at some point with some criteria to finish the game is neither magical nor angry option

Autoscoring has flaws that can be exploited for malicious profit, that’s why we see the score review screen. If your opponent is being a troll or is in any way generally displaying a harassing nature, that is EXACTLY what the call moderator button is for. Just resign the game (don’t indulge them), press that button and explain the circumstance and a moderator will review and adjust your case (usually by way of manually setting to game to your victory).

A Non-Beginner player has put me in the same situation one more time.Loop of (pass,pass,…) 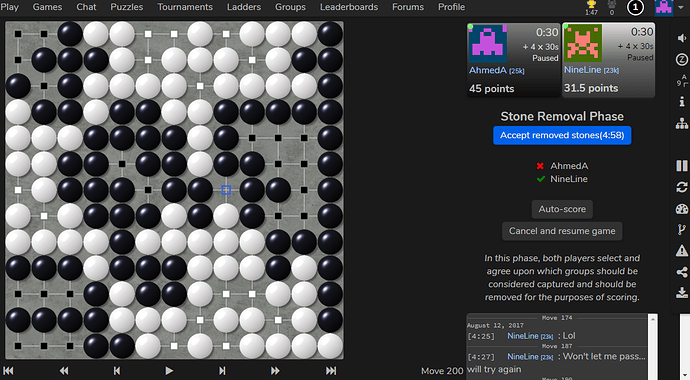 Autoscoring has flaws that can be exploited for malicious profit, that’s why we see the score review screen. If your opponent is being a troll or is in any way generally displaying a harassing nature, that is EXACTLY what the call moderator button is for. Just resign the game (don’t indulge them), press that button and explain the circumstance and a moderator will review and adjust your case (usually by way of manually setting to game to your victory).

FWIW 23k is still a beginner. “Wont let me pass, will try again” sounds like exactly the sort of thing a beginner would have trouble with…

In addition to GaJ pointing out that 23k is still a beginner, I can’t help but notice that in the screen grab you posted your opponent has accepted the score and is waiting on YOU to accept. Once you click “Accept removed stones” the game will be over and you will have won by 13.5 points. As I can’t see any error in the count displayed, I can’t understand why you think there is a problem? (Possibly a past problem, but at this point in time you have full power to end the game by accepting the score)

IMO, the simplest solution would be to allow the game to end, if players disagree in scoring, but marked as in dispute pending moderation. I also think a community moderation system (involving volunteers voting, maybe like StackExchange) would improve response time with less intervention needed from the moderation team.