Your happiest go victory (and defeat) 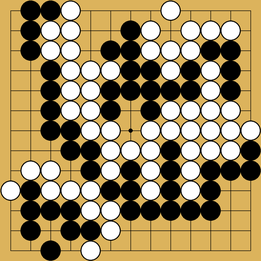 I never thought I would win. Especially with that big clump one the top right.
That invasion was a bit silly, but I still won. If I played one move wrong, I could have lost.

Losing can be a great thing, too, like when I lost to my rival by 3.5 points.

Winning the last game, when having chance to win a real life tournament.
Beat my rival which I met regularly in tournanents and was a bit stronger. I won him in a global way as he didn’t expect I had more, was enjoyable.
Kill a group of a pro in a simultaneous game, who resigned .

Can’t say which of these was the happiest.

Not what you asked for, but my unhappiest victory was against a Dutch 5d player. It was during the 25 year anniversary party of the go club in Nijmegen (next year it will be our 50 year anniversary).
We went to a pub to drink some beers and play some go. He invited me to play. My strength was about 8-10 kyu, so it was a 9 stone handicap game. Boy, did he play rings around me. I didn’t have any chance to win. I should have resigned but played on for about 50 moves, and then thought again about resigning.
Until I saw a move that connected two large dead groups and made them alive.
I played it and he immediately resigned. I told him that I felt ashamed in winning this way, but he was fair about it and had absolutely no hard feelings at all.
All the same - even 24 years later - I still see this as my unhappiest victory.
Happiest victory and defeat? Don’t remember them.

I’d say mine isn’t a particularly great story (or at least I don’t remember most of the game), but in the first round of the most recent OTB tournament I went to I had started to get myself into the mode of playing “calmly”, which I applied to the game, giving my opponent outs to stop fighting so I could coast to victory. He ended up dying anyway but I felt insanely proud of that one.

Of course, I couldn’t hold myself back the whole tournament, the second game I got experimental and died in a corner, but because it was handicap (playing B in no komi) I fought the whole rest of the game for a win, and the third one I just broke down completely, starting a huge dragon fight that benefitted my opponent before even move 30, but it was promise.

Go is in principle an unfair game. You always play against two opponents: the person on the other side of the board and that incredible, most handsome person in the world, most charming person on the internet, etc. that you face every day when you are looking into the mirror.