"Your rank is too high to accept this challenge"

I’ve just add the case of a challenge displayed with green “accept” button, but as soon as I click a big pop up says “Your rank is too high to accept this challenge” (see screen shot). I tried several times, also reload the page.
It is as if the logic to display the green “Accept” button is not exactly the same as the one to accept a challenge, which is puzzling.
At that time I was 12.1+/-1.7. My expected opponent rbhernandez92 had just played a game against a 13k. 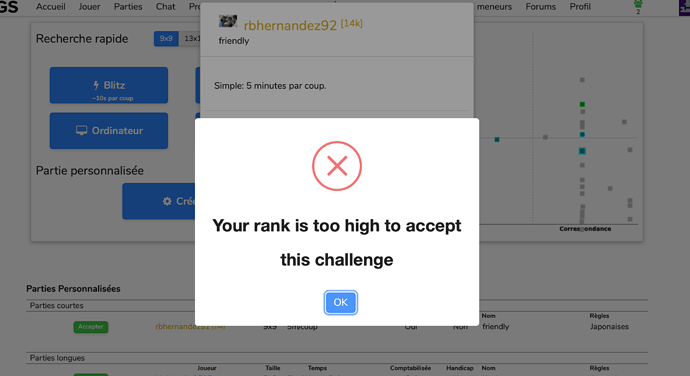 Surprised not to see any replies here. I’ve gotten this error at least twice over the past few weeks. Today it cropped up for a game w/ handicap set to auto, posted by someone at 11.8k. I’m at 10.2k. Odd…

I’ve had the same result. The challenger is the same rank as me - has to be a bug

I doubt that there is a bug, but there is not enough info here to tell for certain. The initial pop-up with the accept button simply initiates the game creation. It is a kind of double-check to make sure you really want to play (like the pop-up that asks if you really mean to resign). When you accept, the system starts to create the game and THEN discovers that you fall outside the rank restrictions. The game creator’s rank is irrelevant to whether one is allowed to play. The creator may want to play someone stronger, or a lot stronger, or play someone weaker or a lot weaker. Further, they might change their specifications from game to game, so one game is not a guide to what restrictions they may create in the next game.

Is it about this opponents rank range? 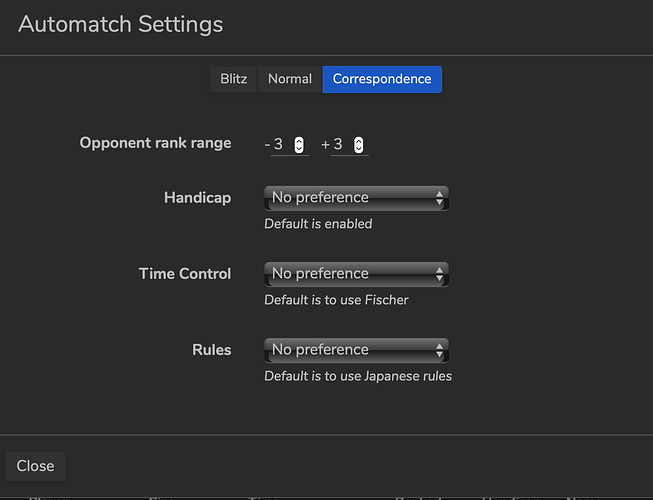 Sometimes I try to join a stronger player’s game. Then it says (title of this thread). As if they had limited their opponents to 10 stones weaker

Well several people have seen this. If not a bug, it is an annoying feature.
In the screen shot one can see the “your rank is too high” and at the same time the green button used to accept the game. Wrt to what you wrote : of course the rank of the game creator is relevant as many people bracket the rank of the opponent they would like (a +/- 3 bracket is even the default). When I mentionned what I saw in previous game I understand this can change from one game to the next, I was just adding some possibly useful hint.

The only reasonable reason for this to happen without a real bug would be :