A silly question: What's the highest obtainable score in a game of Go?

No the pass stone is a prisoner to put on the board, and the scoring will be proceed like a Territory scoring (counting the emptyness only)

I’m not sure what you meant here (pass stones not put on board but into prisoner bowl). You can use territory COUNTING after played with pass stones. But playing with pass stones reflects area scoring, you need to play slightly differently (fill dame since that is pointwise better than pass, get extra points on one-sided dame, extra points for postponed mannenko resolution (while the opponents needs to pass), etc).

What do you call stone counting ?

I mentioned stone scoring (not counting), this is the oldest form where you get points for alive stones only.

for me the fact that you only count emptyness is the major characteristic of a Territories scoring.

This has more to do with the counting method than scoring. You can use territory counting with area scoring, for example (AGA does this). The scoring method, on the other hand, is about the relation between passes and dame plays (temperature).

I think the smallest living group (on large enough square boards) is worth 3 points (two stones + one territory), which could arise in a seki like this: 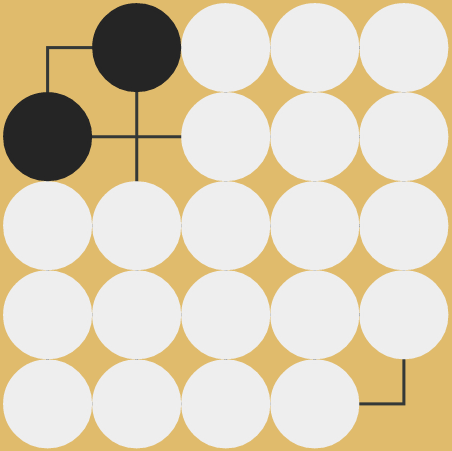 However, under area scoring, stones can be considered alive if both players agree that they are and no one tries to capture them, so in principle, a single stone and zero territory could give a score of one.

On extremely small boards, like 2x2 board at Sensei's Library, a reasonably played game can end with superko preventing further play, while one (or both) of the players has only one stone and zero territory.

It’s your own words on sensei and L19, i don’t know what we are debating. In these articles you separate this from area scoring.

This differs from cases like AGA, where the first phase already uses area scoring (with valuable dame etc).

I can help with the history of rules change, most of my sources will be in Chinese (and some in Japanese) though, there are lots of discussion about ancient rules and how they evolve.

The best we can guess is some time before Tang Dynasty and presumably much earlier (maybe in Han dynasty), the 兩溢 rule is the basis predates stone scoring. And some believe they didn’t compare stones on the board but compare captures (under the rule where there is no pass but handing prisoner if a player “pass”), play until there are no place to play (suicide allow, but that would be handing prisoners to the opponent), and a logical origin of why there is an ancient custom of putting a handful of stones on the board to represent resign, since originally they seem to use some kind of tally by 3 system to count prisoners.

Dunhuang Go Manual (敦煌碁經, or as the name written on the scroll 碁經 The Classic of Go) is the oldest known surviving first hand Go book existed (unlike other sources although probably older but mostly second-hand or more, and most don’t have enough details but only a few sentences). I’ve been able to find the full-size digitized image from the International Dunhuang Project database IDP Or.8210/S.5574 Recto

And my speculation for even earlier precursor

I’ve read in the book The Evolution of rules in Go, hypothesis that Go originated as a type of AtariGo, and where a group only required one eye to be alive. But I still feel those are still more rules than necessary. Hence, I’d like to propose a simpler ruleset that required very few assumptions and priors, even without rules regarding territory, but still looks like it would naturally evolve to Go as we know it today. #1. Each side places a stone on the intersection of the board. One after an…

Later on, in Tang and Song Dynasty records, we are very certain they used a group tax territory scoring that is not stone scoring called 數路法 (count by “road”). The results are reported as how many 路 on each side. This was likely a simplification for 兩溢, so they don’t have to play to the end to count everything. This rule is the one that got exported to Japan, where they later on loss the group tax rule and only keep the now “territory rule”. It’s a branch out of the ancient rule.

Back in China they went for a different route, where they keep the stone scoring spirit, so only one side needs to count, and keep the group tax rule up til 19th century, even early 20th century. The spirit is that since gambling games were what keep the game going for centuries when dynasties collapsed and rose again and again, a system where hidden capture stones can be resolved was needed - simply don’t count them, and only count those on the board. This evolved to area scoring, where they also later remove the group tax rule.

And in the mid to later 20th century, the full set of defined Ing’s rule is proposed to resolved more complicated situation in ko and how to handle time pressure based on area scoring.

Actually I believe similar situations can arise even without passing, when capturing stones are subsequently captured. 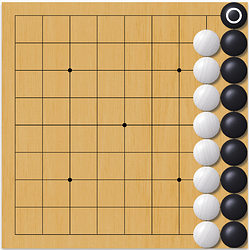 Later on, black to play: 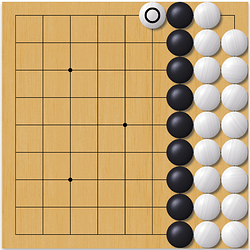 If the game ended after capturing, would not black’s score (Japanese rules) be 71 territory + 19 prisoners?

Well yes 70+18 exactly (after capture)
Well done, so now, back on topic, what would be the max possible with iteration?

We have mathematicians around here, looks like a nice little problem to solve.

I think they divide the dame so black is 3.5 there. That’s what I initially thought on a large board. But I’m thinking if it’s possible to construct a sequence such that black ends up with one single alive stone, where nobody can capture due to the superko rule, which is similar to the 2x2 case?

The answer strongly depends on the exact ruleset. As has already been mentioned, when playing with area score, the upper bound is the number of intersections on the board plus komi, and this score is obtainable.

It becomes more tricky when playing with territory scoring. If we count prisoners as minus points for their color, then the maximum exists and I guess it equals komi plus the number if intersectiins minus one (because you need to place at least one stone to claim territory).

But what if we count prisoners as plus points for the capturing side? The maximum score may not exist unless we somehow bound the number of prisoners that can be taken. This is the case for example when playing with superko rule, where the set of possible games (= move sequence from start to finish) is finite. So we can guarantee that the maximum exists, but I believe that it is a very large number, even on a 9x9 board.
We can construct a move sequence similar to @jlt s example, except that we cannot indefinitely repeat the given cycle. Instead imagine Black fills the board with stones (meanwhile White passes) until all but one intersection is filled. Then White captures 80 stones, and afterwards Black re-fills the now empty intersections, avoiding the capture of the white stone, until white can capture again, and repeat this process. White captures 80 + 79 + … + 2 + 1 = 3240 Prisoners until all but one intersection is occupied by a white stone. But we are not done yet. Black can capture all white stones and prolong the process of feeding prisoners to white.
Note that from here on we need to take into consideration that repeating the same position is not allowed. For example it is crucial that Blacks move to capture the white stones needs to be at a different intersection than the very first black move of the game.

All that said, I do not know how to construct a sequence where the number of captured black stones is maximal under these restrictions. But we can certainly continue the above construction in a way where 3240 * 81 ~ 250000 black stones are captured. I would guess that the maximum is far greater though.

Is there a rule set with allowed repetition of a whole board position?

Ko is basically the simplest move cycle that could be repeated indefinitely, if it weren’t for the Ko rule. Needless to say all common rulesets disallow this, but there are longer ways to cycle the position (for example triple Ko), and those are not covered by the usual Ko rule. The japanese rules make an effort to define how games which end in an infinite loop should be resolved, but it is not disallowed. Rather it is a “special way to end the game”, so to speak.

Sending two, returning one can be cycled endlessly while inflating the score to an arbitrary degree.

In theory yes, but in practice, some referee would call the game eventually and maybe disqualify the player that keeps sending 2 returning 1, for violating rule number 0: “These rules must be applied in a spirit of good sense and mutual trust between the players”

I suppose if we prohibit passing, send 2 return 1 gets limited too, as one player needs to play away somewhere

I did not know that passing is prohibited. In that case I may need to reconsider …

What do you mean by call the game? I hope you don’t mean calling it a “no result”. Also there is no need to call the game in favor of the other player (who is gaining a net of 1 point per cycle in captures).

After the game has cycled enough, the other player can simply abandon that cycle and still win for having enough points.

I find it difficult to apply that subjective zeroth rule. Perhaps the player losing points is mistaken about what is really happening with the sending two, returning one. Also, if the other player keeps prolonging it well beyond when they have enough points, then it is also difficult to fault them, since maybe they are unsure whether or not they’ve yet accumulated enough points to abandon the cycle safely. This could even happen early in the game, with much of the rest of board unsettled, so it could be quite different to judge some sort of line as to when to step in.

The Japanese rules may not be very well suited for full automation, especially in games between weaker players without any human assistance.