When komi is a not an integer, then one player has an advantage from move one, however slight. The AI thinks that player is White.

From the very beginning of this game, white has 60%, black 40%.
Is it that i don’t understand or is it a bug? Or is that the AI knows the result already (let me doubt)?

That game (European Championship Semifinal) is with 7.5 komi under Chinese rules (where score difference on the board is most often odd).

That (usually) comes down to black needing to make at least 9 points more on the board to win.

There is a reason that 7.5 komi is called a “large” komi (AI would even say too large, by 1 point according to KataGo review level IV).

I think that, although your number of “9” points is technically correct with the right interpretation, it might easily be misleading. There is almost always (assuming normal dame parity, but there is in fact no difference for the odd parity!) exactly a 1 point difference between Japanese and Chinese komi. Since black needs to win by 7 points of territory on the board to get a win in Japanese rules, people might reach the wrong conclusion that they need 2 more points of territory under Chinese rules. In reality, Chinese rules only require one more point of territory for black to win.

This is because, as you say, under normal parity of dame (almost always) the score difference is odd under Chinese rules. But what that difference is can actually be predicted reliably from the territory-counting, Japanese style score (unless players passed early, or there is different territory in seki, dame-fight for the last ko or some other very exotic difference kicks in): when the Japanese score difference on the board is even, the Chinese score is that same difference but adding one point for black: that is because precisely in those cases, black gets the last dame and gets an extra point (when white gets the last dame instead, the scores match, because they both played the same number of stones).

Still, AI seems to agree that 6,5 is a great Komi (under territory scoring): it seems that strong AI under self play finds the most balanced games with that komi (slightly preferring 6 over 7 when going for integer values), thus 7,5 would be “one point too good for white” at the very top level (while the old komi of 5.5 would be one point too good for black).

Of course this is strong evidence that “perfect” komi for ideal players would be 6, but it is a tough call between 6 and 7 so 6,5 might be more balanced than 6 actually for human play (apart from being able to break ties).

Due to the dame parity, pure area scoring rules (and not “hybrids” like Lasker Maas, the “Taiwan Rule” or Button Go) only allow to set komi to 5,5 or 7,5 (6,5 would make a difference from 5,5 only very very rarely, as the chinese difference in score is very very rarely 6, that requires special odd seki).

AlphaGo, LeelaZero and KataGo all agree that 7.5 is too much.

It seems that 6 - 7 komi is more fair than 7.5 komi under all rule sets. Why is the fact that 6.5 komi is about the same as 5.5 komi under Chinese rules, considered a stronger argument than fairness of komi?

I don’t think it is considered stronger, it just explains the historical jump that went from 5,5 directly to 7,5 when humans experimentally found 5,5 to favor black: both rulesets, which used 5,5 at the time, increased komi. Since 5,5 to 6,5 would be a tiny increase because only in very very rare cases makes a difference, they went for 7,5. This was long before strong bots existed.

As to why not change it once again today, to lower the Chinese komi… Well I do not know, maybe one day, they will decide to change it again

If they are to tinker with komi again, maybe introducing “Button Go” (or the basically equivalent Taiwan Rule) to allow for meaningfully setting the Chinese komi to 6,5 might be even more interesting than just bringing it back to 6,5 (which is almost the same as the old 5,5. Though that might still be slightly more fair than 7,5).

I’m rooting for integer komi. 6 for Japanese rules and 7 for Chinese rules

Me too. It bugs me that otherwise tied games are arbitrarily awarded to white. Would love to see AGA adopt integer 7 komi. I feel like China and Japan may be too traditional to change now… But Korea might

Me too. It bugs me that otherwise tied games are arbitrarily awarded to white.

I mean since we’re probably still far from perfect play it’s really not that game was arbitrarily awarded to white, it’s that black made enough mistakes for white to win right?

I do personally prefer to hear that someone won rather than 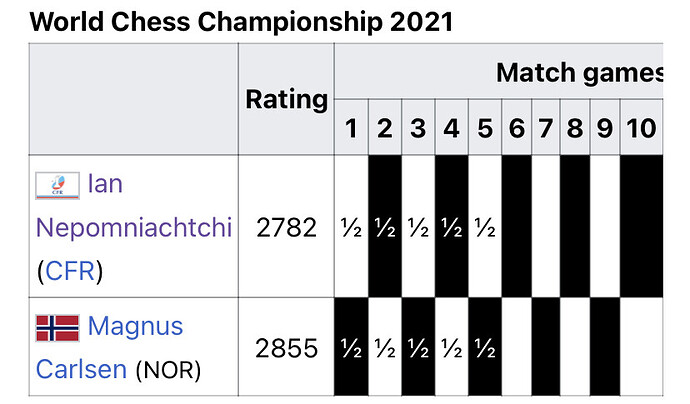 Edit: Of course one could feel the same ways about games like soccer. It can be a bit disappointing to watch a game that ends up 0-0 after 90 minutes, especially if both teams didn’t really get any good chances. Maybe they were both just equally good and I guess that works ok-ish in a league format.

I agree that in chess, there are now probably “too many” draws at the very top level (above 50% in general among grandmasters! 50%! MOST games among grandmasters are draws!). In many other sports it is more like 25%.

I doubt that would be a serious problem in go given its much more granular score, so that even a “silly one point mistake” turns a drawn position into a loss (unlike chess where you might have a whole extra bishop at the end, yet it is a draw), so there should be much fewer ties. Still, it is so incredibly convenient for many tournaments formats and classification games to avoid draws

while overall pro win as white same as black with 7.5 komi,
looked at recent games of Ke Jie only:
winrate as white 85%
winrate as black 66%

well, when 2 TOP Go players fight, it just should be like this:
They should play 2 games (with change of color) and only then winner decided
1-1?
another 2 games
…
so perfect komi not needed for fair result

Ke Jie does not count, you cannot just play the Ke Jie card, komi is meant to balance play for HUMAN Chinese pros

If they are planning for multiple games, then playing a fixed length series (with alternation of colors) is more common, I think.

Historically, alternating between black and white would be used to balance out the unfairness of games without komi, and if one player started winning too much, then the other would be beaten down by switching to a softer form of handicap where the weaker player plays black more often.

Jūbango (十番碁) is a Japanese term for a Go match consisting of ten games which might be ended earlier if agreed by both players. A decisive victory would result in the opponent being 'beaten down' to a lower rank. A player would be beaten down if he fell behind his opponent by four wins in the net score. This would mean a change in the playing terms corresponding to a handicap suitable for a rank difference of one rank. Some notable historical jūbango players are Go Seigen (1914-2014), Kitani Min...

So disappointed with the lack of racist jokes

It’s pretty interesting, actually, since a lot of AI tends to suffer from racism as well (kind of expected: garbage in, garbage out)

I think that draw margin is tightly linked to (winning) score granularity in relation to common score ranges.

In chess, both players start out with about 40 points of material (besides the king). To win, you usually need a (potential) material advantage of at least 5 points(a rook) in the endgame, otherwise you’re lacking material to mate. So the draw margin may be expressed as ~ 4/40 = 10%.

In a game of go (territory scoring), stronger players tend to make about 70 points (order of magitude similar to a basketball game or a tennis match?).
With integer komi the draw margin would be more or less the granularity ~ 1/70 = 1.4%.

There are much more draws in chess than in soccer though. Chess has over 50% and soccer under 25%

I was more trying to arrive at some estimate for an “intrinsic” draw margin of a game, loosely derived from basic mechanics of the game.

In practice you would also need to account for how evenly matched opponents are (limiting the score range to use, as the typical score difference between these players).