So, I’m watching one of the EGF games that’s on now.

For some reason, it popped out to me that the stronger player has this shape 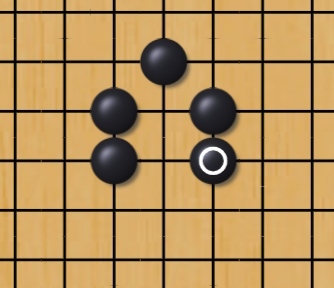 Probably the short answer is “you really should study some Go theory, at last, Gia”, but what’s the long answer to the question “what’s the story of this shape?”

It reminded me of a bamboo joint, but not exactly, because the second stone of the “legs” sometimes came after the “top”, or there are two instances where this shape is waiting for the second leg to complete.

There’s probably a SL page about it (there’s one for everything, no?), but where?

Of course shapes happen as the game happens, but it seemed noteworthy.

Shape is about safety, but also about efficiency.
I can tell this is really safe and strong shape, but without seeing the surrounding white stones, I cannot tell if it’s efficient.

If there are no white stones nearby, there is much redundancy in this shape, meaning that black spent too many moves to create a very small, overconcentrated territory.

two instances where this shape is waiting for the second leg to complete.

That kind of “j-shape” is very common. A tigers mouth with an extra stone.

Also without one of middle two bamboo stones it could also be on its way to a net/geta shape.

Where were the white stones? Go is a 2 player game, not 1 player drawing pretty patterns in isolation.

Sure, we could look at it that way. 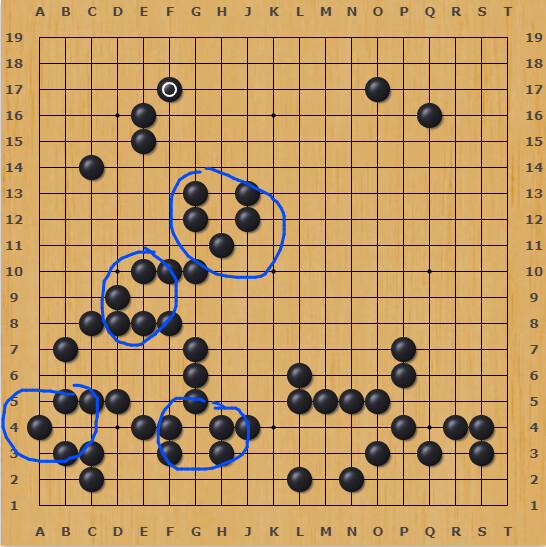 (For reference, it’s this game, but the ones up there in the ranks will probably won’t even need the reference).

It’s probably just a stupid observation I made and it’s only pretty shapes, but maybe the black stones tell a story about the game? Probably not, but I thought I’d ask.

White has some too! 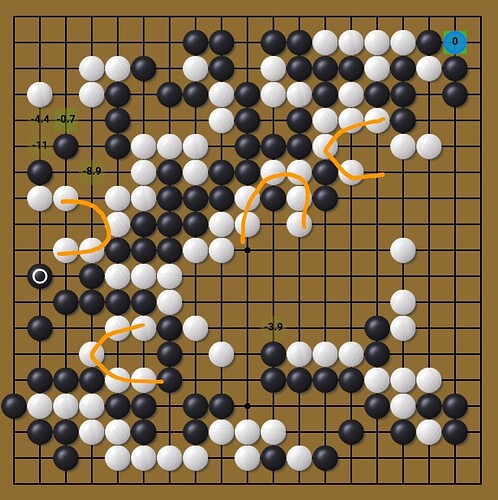 iirc, at that point in the game white had 1 (I mean the exact 5-stone shape), but later both players had more.

A tigers mouth with an extra stone

[image] I find it useful to think of this shape as separate (but ofc derived from) the tiger’s mouth, because it’s quite a common structure that occurs naturally following good play in many contact positions (not surrounded by empty space, obviously). I call it the crocodile’s mouth Crocodiles Mouth at Sensei's Library I’ve toyed with naming a jug shape when there’s an extra black stone at 2-4, and a vase when there’s instead an extra one at 5-4 (making a sort of enhanced bamboo joint).

You should never understand “shape” to mean the shape of stones of “only one” player. Shape (when used as a useful concept) must always take into account both players stones, most of all because that affects the “efficiency per move” which is the key subtlety behind the “good shapes / bad shapes” heuristics.

The prototypical example of this distinction is the “empty triangle” vs “full triangle” shapes: the empty triangle is one of the most well known bad shapes: in most of the cases, making an empty triangle is a bad move, you typically need a very concrete justification for making one (for example “playing this empty triangle here cuts this group off, killing it”, thus you have a very important reason that makes shape secondary).

The “full triangle” instead is a super common good shape: your three stones are very well coordinated and connected, and very strongly block off the influence that the enemy stone would cast in two directions.

Related to this is the saying that a ponnuki is worth thirty points. It is often misunderstood that the ponnuki shape is just the shape of the four black stones after capturing a single white stone. But that is not a “true ponnuki”, in the sense of a very good very valuable shape as in the saying: just playing four stones in that shape would be overconcentrated and slow, not good shape. The key is that “getting a ponnuki” means achieving that shape by actually capturing one enemy stone: “the captured stone” is actually an important part of the shape! Note that the capture means that you had to use four moves, but the enemy had to use one move too (the one stone you captured), so it is like achieving the 4-stone formation with only three moves: that is a great result! Achieving that shape with 4 actual moves is slow instead.

This shape has no name (yet), it’s just a combination of a bamboo joint and a tiger’s mouth. How about “house shape”?

Is there already a tong shape? It looks like a tong. (plural is correct I know, but tongs shape sounds weird)