Hmmm. The automatic handicaps are not working. Now that my rank have dropped considerably I am not getting the handicaps. Something is wrong. See here the screenshot; 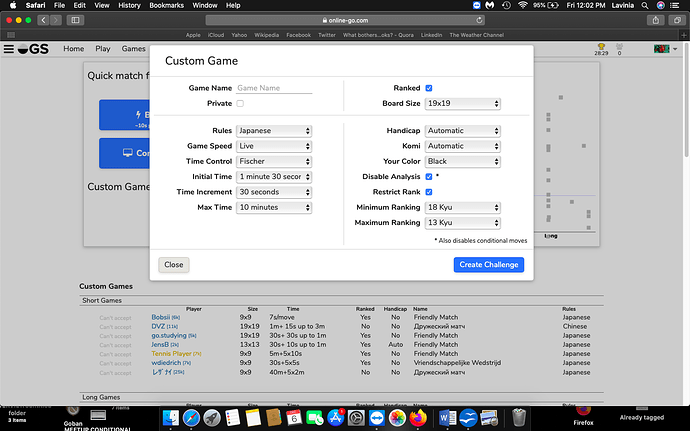 This game has a reduced handicap of 1 (0.5 Komi, black plays first)

Iirc the handicap is reduced when one player has a deviation of more than 125. The deviation of your opponent was 136.

@anoek, is it intended, that handicap is reduced until deviation is smaller than 125, while ranks are considered stable below 160.

what it surprises me is that when I had a 20k rank and I played a 18K. I got 2 handicaps. IF I played a 17k I received 3 stones. Now I am 22k and offered a game with a 18K opponent …I dont see any handicaps for me. It does not makes sense. Thank you

is it intended, that handicap is reduced until deviation is smaller than 125, while ranks are considered stable below 160.

I think it was, but I’ll have to go delving to answer definitively and to determine if it’s actually a good idea or not. Intuitively it seems like they should align though… The ranking system needs some analysis again to see how things are holding up.

It is confusing to me. As I stated earlier I always got handicaps regardless. At 20K playing with a 18K i automatically got 2 stones. Why now that I am 22k much lower I get 0 stones?

In your game, you actually got a handicap of “1 stone”, which just means that you get to play as black with komi reduced to 0.5 points. This is the standard handicap for 1 rank difference, while receiving two stones is appropriate for 2 ranks difference.

Your opponent’s rank was displayed as 18k, however, their underlying rating number also has an associated uncertainty (“deviation”) that is particularly high, which indicates that their rank is not so reliable.

Normally, one would expect to see 4 handicap stones in a game between a 22k and 18k. However, it seems that @flovo and @anoek are suggesting that the high uncertainty in your opponent’s rank may have played a role in the system automatically reducing the handicap that you received for that particular game. Given the high uncertainty, the system appears to be assuming your opponent may actually be as weak as 21k, and possibly the handicapping system is using that conservative estimate.

Further, @anoek seems to suggest that the behavior of the system may require further consideration.

I read the other posts in this thread first, but your explanation really helped to put the whole thing into perspective for me. I “get it” now. Well done