Could anyone help me find some statistics on game length on different board sizes? There was some related discussion in this thread, including this diagram for pro games: 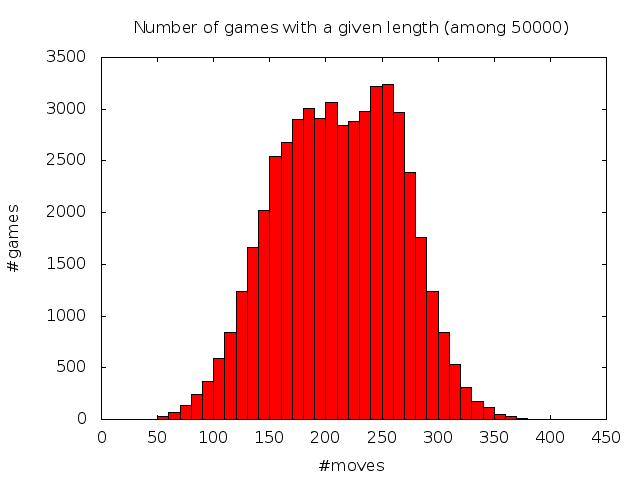 (average: 211 moves, or 257 moves for games that went to counting. I’m mostly interested in the second number)

It would be cool if someone could extract similar data from some random sample of OGS games (doesn’t have to be a big sample size), but any other source of games would be interesting too.

Right now I’m mostly curious about whether game length scales linearly with board area, but a histogram like the above is of course very useful when considering different time controls, so it would be very nice to have that for different board sizes

I remember looking at this for my own games a while back and with some pretty generous rounding to make the numbers easy to remember / calculate time settings with, I came up with very roughly:

I’d expect the results to be extremely dependent on player’s strength.

Of course absolute beginners will be outliers, but it seems to me that any strength between SDK to superhuman should lead to pretty similar game lengths (as long as we only look at games that go to counting).

But to make the question a little more precise, let’s say for the sake of argument that we make a strong KataGo play lots of games on different board sizes, and always stop after all the dame have been filled (so no filling territory/removing dead stones like KataGo does in some fraction of training games, and no resignations). Then plot the average game length against board area. Will it hold true that a 19x19 game is about 2.14 times longer than a 13x13 game? Does the edge of the board affect things in a noticeable way, so that looking at area is not enough? (maybe rectangular boards of same area but different dimensions have quite different lengths)

I know all of KataGo’s training and match games are available, so the data is maybe already out there (although it seems that most match games end in resignation, and most training games have “unnecessary” moves at the end), but I don’t know how to get it myself

I came up with very roughly:

I know it’s rough, but that tracks pretty closely to board area! Would love to see a more detailed analysis! Anyone up for a 17x17 tournament?

From which set of games?

Here are those game lengths as a percentage of the number of intersections:

Wouldn’t it be awesome if this converged to exactly 2/3 ≈ 66.7% as board size increases?

(just kidding, probably no reason for something this messy to be that simple… but 2/3 actually seems like a decent rule of thumb!)

Even if not 2/3, it would be pretty cool if there were a Go-based transcendental number

From which set of games?

Some games I had lying around.

Among 71 counted 25x25 games I found, length is 408.5. I filtered out RandomBot games because apparently lots of people entertained themselves by playing 25x25 with it producing 600-move games. 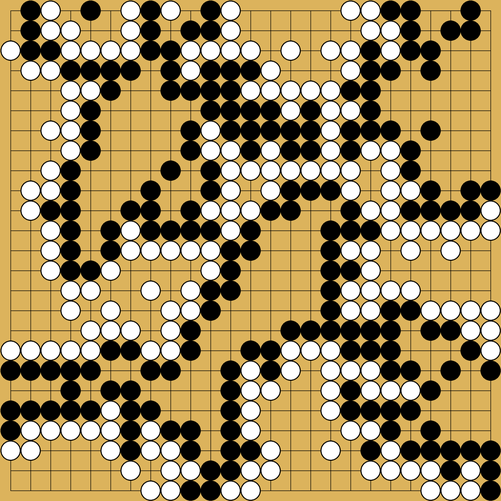 Another data point in favor of the 2/3 hypothesis!

Theoretically we should calculate confidence intervals and do some testing so trash games don’t get in the set, but that’s way too much for me. I’ll look up some sizes but that’s about it.

I checked the 100k OGS dataset from here (forum thread).

Here is a histogram of the game lengths:

Every pixel is one game. The average length is 255 moves.

Pretty close to the pro game average of 257 mentioned here!

I wonder if there are any differences in game length as ranks go up. I get a feeling that as strength goes up, a player would get a better idea of who is winning and resigns earlier, where few games go into scoring, but it might not be the case for lower rank players. Not sure if it is the case or not.

What number is that nice tall mode standing so proudly above all the others?

Probably just noise - I would expect a smoother distribution from the complete dataset.