Yesterday there was a Tengen title game. Pretty cool game with a beautiful flying knife, really showed the essence of this joseki. And yet quite close. Somewhat funny also because the player who was worse the whole game ended up winning.

Anyway, when it was all said and done, and all the endgame was played out, it seemed. There was one more move that affected the points. Apparently if white played 1 they would get a point (Japanese rules) compared to if black played it. I think. Who would’ve noticed, eh? 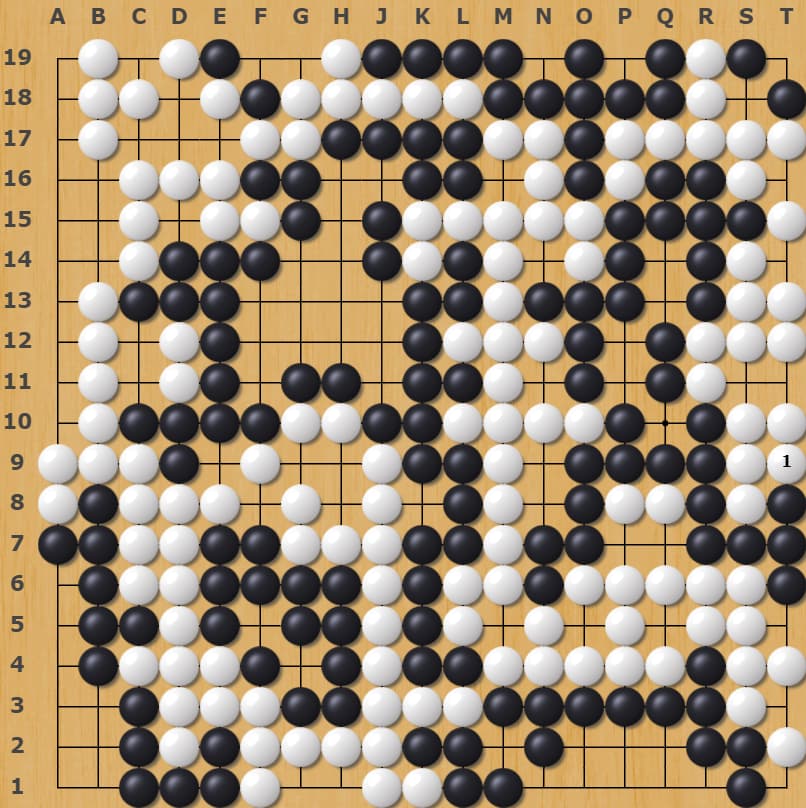 In the game it didn’t happen and it ended as B+1.5 so it wouldn’t even matter. Maybe that’s why white didn’t care to try. But these little moments are pretty cool. 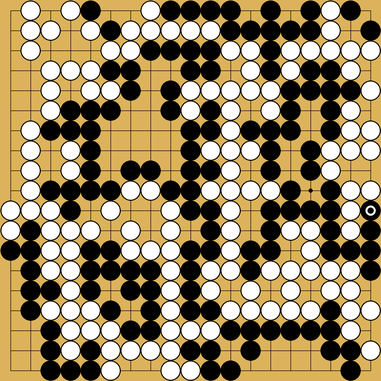 Apparently if white played 1 they would get a point (Japanese rules) compared to if black played it. I think. Who would’ve noticed, eh?

Does it really matter who plays at T9, as long as it is played in case white tries to capture the 2 stones in the corner?

If no-one ever plays T9 there, white could connect T16 T14 and then approach S18 (assuming black would just pass). With that T9 liberty being filled, black is able to throw-in S11/T11 exchange and white still wouldnt have liberties to play at S18 without putting themself in self-atari.

I think having T9 affect estimated point tally is just some sort of mistake by the AI?

The idea is fairly straightforward, I think. It’s about whether the black has to throw in at S11. If it’s seki as it is then nobody gets any points. If black throws in they lose one point - the captured stone.

If black gets T9 then it’s seki as it is without throwing in. Even if white tries to capture the corner by filling in 1 and 3 and then 5.

Black throws in 6 at the last moment so now white has to capture corner to live with 4 points but black is capturing four stones so they get 8 points. Thus white is -4, they aren’t gonna do that. Black isn’t going to throw in before 1,3,5 are played so it’s seki as it is after black got T9.

If white gets T9 then the calculation is different. Here is the same position but the T9 is white.

Now white can do under the stones. White captures the corner, black captures five stones and white recaptures with 11 and then 13 at T10. 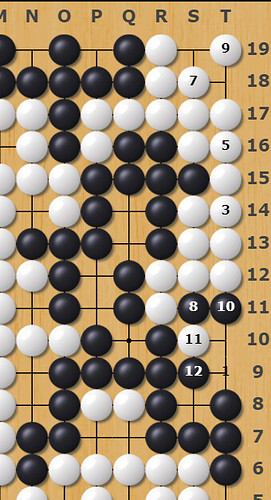 Now we need to calculate the points. White lived in the corner with 4 points, black captured 5 stones, white captures two stones worth 4 points and black can make one eye there so 1 point too. That’s +4-5+4-1=+2 points for white.

Black doesn’t like that so as soon as white plays T9 they’re gonna throw in. And white has to take otherwise black takes with atari, no under the stones nonsense. This is the result. One captured stone - one point for white compared to no points in previous case. 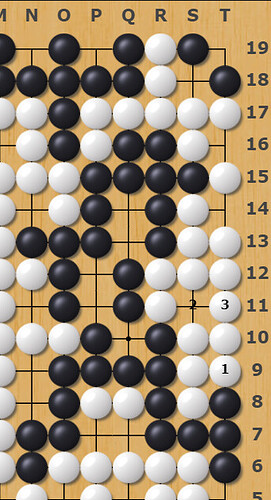 The idea is fairly straightforward

Proceeds with 6 parragraphs of explanations and diagrams

Under the stones is pure poetry. Chess players will never know this feeling

Series of throw-ins and liberty race, with a twist under-the-stones at the end, risking a big group in a seki, all for one point of yose

One captured stone - one point for white compared to no points in previous case.

I feel I need to be enlightened here. I’ve not given it much thought but is the throw in really a point lost for black with no points for white anyway?

The only stones that are alive but posses dame are the top corner group. T15 and the two groups below it are alive and not in seki. So the eye points they surround are territory right?

Here is a summary of the game:

Basically this game was one 100-move “joseki” and then 170 moves of small endgame.

There only stones that are alive but posses dame are the top corner group. T15 and the two groups below it are alive and not in seki. So the eye points they surround are territory right?

You might want to call our expert @antonTobi , but I’m pretty sure the whole white group is considered seki, not just the chain of nine white stones closest to the corner.

Note that “group” does not mean “connected chain of stones”.

“group” does not mean “connected chain of stones”.

Maybe but it’s not clear (in Japanese rules) what group actually means.

Article 4. Stones that may exist on the board
After a move is completed, a group of one or more stones belonging to one player exists on its points of play on the board as long as it has a horizontally or vertically adjacent empty point, called a “liberty.” No group of stones without a liberty can exist on the board.

This is the only mention and doesn’t really define group. But e.g. t15 is “one or more stones … has a horizontally or vertically adjacent empty point”

I’m sure @yebellz will be along shortly…

Can’t feel bad for not seeing it, since even top pros missed it in their big title game ^^

It’s hard for 0k players too…

I am certainly no expert on Japanese rules, but I can confirm that this is indeed the common interpretation. Someone could dig up some Japanese pro games that went to scoring with a multi-chain seki to confirm, but I’ll just give this reference in the meantime:

Antti Törmänen (Japanese pro) mentions the position below in his endgame book. He says that throwing in at A is a common mistake, since it loses a point.

This is a good example of the difference. Here “a” (and the point above it) is “eye space adjacent a group which possess dame” and so is not territory.

It’s like t16 in the game above. But the other “eye spaces” are surrounded by white groups that do not possess dame. But this hinges on the term group being adjacent stones rather than a broader definition along the lines of “stones adjacent to others of the same colour or eye space entirely surrounded by stones of that colour”. I feel this kind of definition is a bit of a stretch.

Now white can do under the stones.

We might have slightly different ideas on what’s straightforward

But actually thank you for explaining, it made it much clearer - I wouldn’t have even thought of the under the stones in this situation.

Yes I see what you mean. It’s kind of hilarious that the Japanese rules (at least that specific translation) fails to define something so basic, but if you go through the whole thing and read between the lines, the most reasonable interpretation is that group does not mean chain (at least in the context of determining what is in seki).