First there were some animated jumping red christmas balls on the left. Then they moved to middle. Finally they settled on the right. I vote this update a solid 10 out of 10.

@anoek
I think the review should show territory loss/win by move. This tends to be a lot more useful for humans.

I’m having an issue: in my old games against site supporters the AI analysis isn’t available at all.

I guess we’ll just have to play more games.

I guess we’ll just have to play more games.

My older games against non-supporters have it

Thanks, I’ll be looking into it today

2 posts were split to a new topic: Some bot not working

If you want to play against KataGo, it is operated by its author with this account:

KataGo is a bot trained using a AlphaZero-like pipeline with a variety of experimental modifications and enhancements, but still learning only from playing itself starting from random play. It is currently using a 15-block resnet close to comparable...

It is available as an option (“kata-bot”) when setting up a game against an AI.

It appears downloading the AI reviewed files might not be working.
The format of the files with AI info appears to be the similar to Lizzie, meaning you can run analysis using Lizzie locally and upload the sgf that has winrates and varations to OGS and view them. Its not quite the same a Lizzie as not all varations are visible. This is especially useful for reviewing games with others. The formatting would be nice to standardize around a program and clarify which one, perhaps Lizzie. Since Lizzie, q5go, and GoReviewPartner all use different formats for their sgf’s that contain varations and winrates.

Do you have a game link where it’s not working?

This happened in two different games, a 9x9 and 19x19. I am absolutely confident that there were no real “moves” remaining (not even dame) and the AI did not show any variations either. 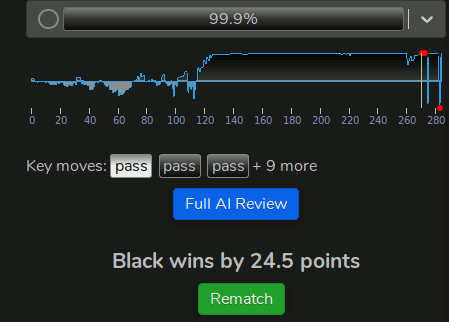 The issue I mentioned before is fixed, thank you.

Now I have some doubts about top three moves.
In the last game I finished (against not-supporter) there’s a nice winrate chart along the whole game. Top 3 moves are highlighted on the chart by red dots. That’s an awesome amount of information. 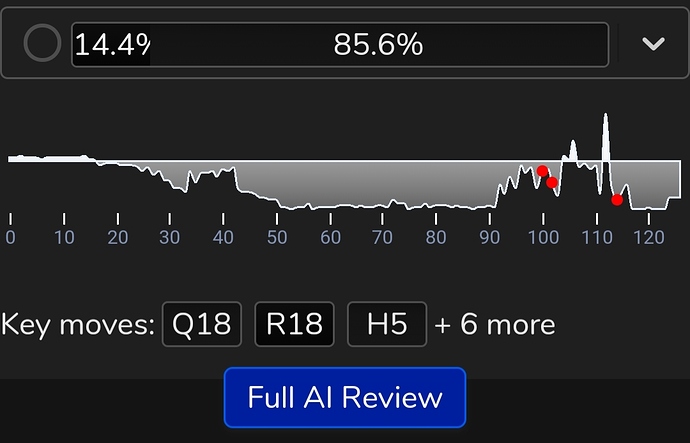 But in all my previous games (against not-supporter) the chart is very different and confusing: it’s flat, it ends before the end of the game and there are 4 red dots. 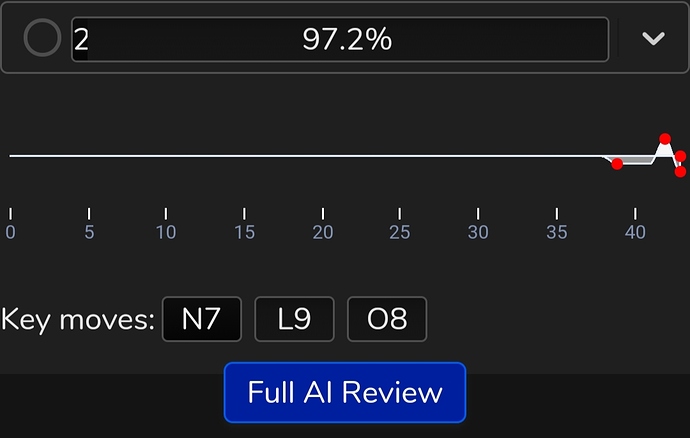 Could it be related with the last update?

Yeah the old fast reviews didn’t have all of the winrate information. I should probably just delete them so they are regenerated…

Re the top 3, I’ll be looking more but basically what happens is we do a very fast pass to get a hunch about how the game flow went, and then we use that to pick the top three we are going to analyze, and then do full strength reviews on those top 3 moves. After doing the full strength review on those moves the winrate will almost always change a bit, sometimes by a lot. So it’s far from perfect… but it’s not too uncommon that it’ll work out pretty well

I should probably just delete them so they are regenerated…

I think so, since some of them are very strange: top moves on pass (as pointed by taatelikakku), top moves on first and second move (I can provide link). They seem bugged while latest ones look perfect

When I try some of the suggested moves and it shows me what to do next, it can be hard to understand because the “phantom” stones are so heavy. I think they should be even lighter - or invisible until I click them, or something.

Oh, and when I try out those variations, if there’s a ko fight, it covers up the smaller numbers, so that I don’t know where to click first initially.

https://online-go.com/docs/go-rules-comparison-matrix
there is rule that “White receives an additional point of compensation for each black Handicap stone.”

So Score estimate and Bot review should be fixed.

Thank you for the bug report.

estimator. It always counts area + handicap. Nothing else. So you should never rely on it

It doesn’t look at handicap - that is the problem. It just needs (score - 9) fix

@anoek For uploaded sgfs with odd played stones (initial position played out of order) KataGo doesn’t know the initial board position, assuming an empty board. The variations for the last move are played on too of perfect alive stones 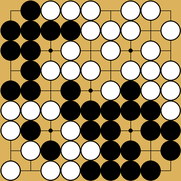 and another variation of the same game 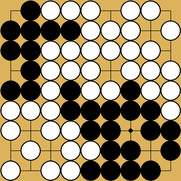