I have been thinking (unusual for me), those of you who play under Chinese rules, how exactly do you define a move value? In the example below, do you say/think the move is worth 2 points? Or do you automatically disregard the extra point for alive stone (thus basically thinking under territory scoring, though playing area…)? 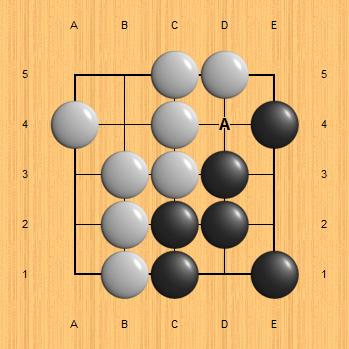 Not trying to shame any rulesets

, just honestly wondering if there is an assigned value to a move difference since under area scoring any move is basically worth +1 compared to territory scoring…

how exactly do you define a move value?

I think this is a very difficult question to answer under any rules set, even in situations where we have arrived at the “endgame” where the life and death of all of the stones are not under question.

In another thread, I went down a wild tangent where I outlined some of the incredible complexity of evaluating the value of end game moves. I don’t fully understand it all, but I think it does involve calculation and symbolic reasoning that goes beyond mere numbers.

Dame are worth points under area scoring rules, but in most cases, at the very end of the game, the “true dame” should simply be split between the players, with one player getting an extra point if there were an odd number of “true dame”. Note, as soon as the game reaches a state where all that is left to do is fill an even number of “true dame” (ones that don’t require teire moves), then both players can safely pass (leaving an even number of true dame unfilled).

In your specific example, playing at A is worth points for both players, even under Japanese rules. If white takes A, black will eventually have to reinforce at E3 (costing black one point of territory). Hence, it is not an example of what I’m calling a “true dame”.

These are very misleading statements and seem to reflect a misconception that the basic strategy of the game is significantly changed between area and territory scoring. Except if some very rare situations arise, players should basically play the same way regardless of the rules.

As for counting living stones on the board in area scoring, one can really think of it as a proxy for counting captured stones, or vice verse, since it is only the difference between the two players’ scores that matter.

In essence, there is no real difference (except for very rare cases) between thinking under area scoring or territory scoring. Note: under Japanese rules, one is technically compelled to fill all playable dame in order to avoid losing points.

A is sente here for white right?

If we compare black playing A to white playing A in Chinese rules.

White gets the corner dame in both cases. Black will get a point at e3 in both cases. Whoever plays at D4 gains one point, so that’s a swing of 2 points, so by swing counting you could say it’s worth 2 points.

In Japanese rules it’s the same, white playing A causes black to lose a point (white gains one point) while black playing A means they don’t need to fill in e3, so still a swing of two points.

Unless I misread something.

First of all, thanks for the super long response, did not want to take up so much of anyone’s time

Yes, I absolutely agree and appreciate the complexity, but that’s not what I am after in my current line of thought. I do not care whether we can assing the correct value (I am pretty sure we can’t most of the time). I am wondering whether being taught the game under different ruleset means we think about (our imperfect and simplified) move values differently. That’s why I chose the simplest example I could think of. Of course we should ideally arrive to the same result, but HOW we get there is what I wondering.

I cannot see how I am being misleading, nor do I claim that the strategy differs under different rulesets. Not at all.

To put in the form of the example - I was taught Japanese rules and always have them in mind when playing. For me A is woth 1 point because it secures 1 point of territory that would otherwise not be secured.

But under Chinese scoring both territory and alive stones count for points. In my mind then A secures 1 point of territory + 1 point for the alive stone - therefore two points. Since as you said both players have this privilidge we can technically omit the +1 for the stone (because both players have the same ammount of moves) and hence there is also no change in strategy. However, should that be the case, then when playing inside own territory or losing a stone, you would have to take that move as -1 (because you are losing that extra “free” point so just as in Japanese rules) which sounds super weird to me, because that would basically be my thinking and it can’t be the same, right?

I was also thinking you might (under Area scoring) think in some sort of fractions as you only care about half the board, but cannot for the life of me come up with a system that would not be super confusing.

I am just wondering whether people who learned the game in Area scoring have a different system for assigning values (however imperfect our values may be). Not sure if I made myself more clear, but I tried

Was any of you taught Chinese as the default?

Game-theoretically, all moves are basically one point larger under area-scoring (that is: the temperature of the corresponding game is exactly one more, as in fact the japanese game is equivalent to the area scoring game chilled by 1, in CGT terms). So, all miai values, for example, in this table would technically be +1 when using area scoring.

Now, in terms of strategy as explained this makes almost no difference except for very peculiar situations. That is because the “extra point” gained in each move cancels out, as both players play the same number of moves, except for the last one move, which depends on the parity of dame and thus does not normally depend on any endgame strategy difference, as playing a perfect territory-scoring endgame will result in no worse area-scoring result.

So if you want to count, you can use whichever method seems easier, since “2 is larger than 1.5” will give the same conclusion as “1 is larger than 0.5”, say. Counting territory is easier in 19x19 because of the very large and hard to “cancel out” numbers involved in area scoring, and I think that is why almost everybody counts that way, even when playing with area scoring. In 9x9 however, I’ve found that area scoring is very often easier for counting when the game ends with only two large groups, one of each colour, as then imagining a “line” in the middle and “canceling out” full rows is very easy and leaves only a few extra intersections in the middle to consider.

This using of territory-count to get the area-score is just a mathematical trick, but very useful, as yebellz explained: since there are much more stones than prisoners (usually) and it is typically simpler for humans to keep track of the difference in prisoners, than the difference in stones on the board (even though both differences are essentially the same almost always!!), the territory-counting trick is always useful.