This is a place to propose and discuss changes to the format of the OGS Team League, if and when we play another edition next month.

PS. My judgement for this month is that free placement is optional, but that White has the right to insist on standardised Japanese placement. I’d like free placement to always be available, which is something for discussion.

We’ve got a week in which to hold conversation on these points – I’ll probably poll on the 20th and close on the 22nd, proceeding to registration.

What do you all think?

Although I’m enjoying the theme, I’ll politely bow out for the next one if last table has such big rank difference again. But I’ll follow and cheer all the same.

About handicap, I personally find it much easier, fulfilling and also more educating to play with reverse komi. I think people get carried away with finding the absolutely exact number that would be appropriate, though, instead of focusing on a playable system, so we can do the thing and have fun. I don’t find it helpful or considerate, I find it outside the scope of the discussion.

There was a nice discussion that led somewhere here Go (Baduk, Weiqi) Players on Facebook : What would appropriate negative Komi be if I (10k) play a 25k who does not want to take Handicap

tl;dr 1
even if not absolutely accurate, this chart could be useful 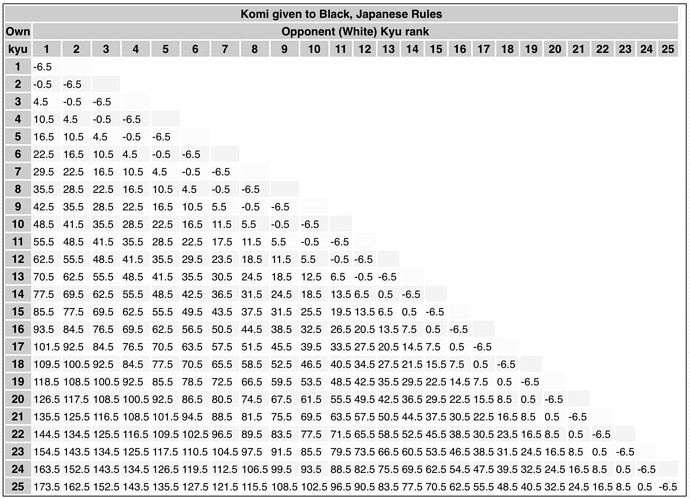 tl;dr 2
“Here in western Japan, we represent a step of one dan or one kyu as one handicap stone on the board or six points or some combination of the two. This means that the case in the post the 15 kyu difference would yield a 15 times 6 or a 90 point handicap if no black stones were placed on the board.”

If it’s stones and not reverse komi, I guess the standard 1 rank=1 stone would be sufficient, but what do I know.

4 players is good for me. With fewer players, ranks would be too spread out in each category. Or we could allow 4/5-player mix.

I only just realised that next month is July, not August… :D

Here’s another point of discussion.

Personally, I prefer uncapped handicap, but I hope that the boards won’t be unbalanced enough for this to become a practical concern.

Too much work, I am good with whatever you guys decide.

I like Japanese ruleset only because it is the default. Again, I am lazy and whichever is fine.

Uncapped is fine for me too.

I’d be interested in joining this shindig. I don’t have a team and not sure if I’d be able to form one. Anyways, I’ll note myself as a free agent in case there is a team looking for a replacement.

I have never understood your formula, jlt, and I don’t think I’m going to understand it now.

No matter how many times you say that a difference of one rank is fourteen points, I know that is not correct. A 5k does not give an 8k fourteen more points than he gives a 7k.

I find Gia’s proposed system of a simple six points / rank much more practical. Complicated formulae are not suitable for application…

My formula is not complicated, I could make a table like in Gia’s post. My point is that 6 points per rank is too little. For instance in Gia’s table, a 1k is supposed to give 48.5 komi to a 10k, this is definitely too small. In my table I would put 105.5 komi, which would be more realistic.

To convince yourself about this, open Katago, let Black play 9 times and White pass 9 times. Then Katago expects Black to win by 126 points.

On the handicap, can we adjust based upon the results of the June one?

I don’t have confidence at all to play with only 2 stones against 4-5d as a 1kyu, but we will see. we have three 1kyu and 3 4-5 d. If the results overwhelmingly favor one side, we can adjust i guess.

OK, but could you please try to rearrange or approximate

You have a lot of operations going on. Could we keep them down to three or ideally two?

I’d appreciate something everyone can understand at a glance, so we can be sure of what your proposal is.

Please be aware that not everyone in the league has the same level of mathematical literacy.

What I’d personally be in favour of is allowing Black to choose his preferred handicap mode for the league.

In the registration period, every player would specify whether they wished their handicap as either

and that information would be appended to them in the relevant places, and would apply to all their games in that month’s edition.

I see organisational issues in mixing stones with reverse komi in a single handicap, so I’d suggest we hold off on that idea for now.

But we should set a ruleset to look serious. No major tournament uses various rulesets.

We can think about the first formula as well, obviously, and poll it.

Don’t worry, everything will be voted on on the 20th–22nd :D (or perhaps before if discussion tails off).

I was going to open voting tomorrow, but I’m not sure how interested people are… better to do it later, perhaps.

How do people feel about handicap minus one? i.e. in a game with rank difference 6 the lower rated player gets 5 stones.

I feel that the half handicap is generous to the higher rated player. Out of curiosity, has any of the handicap games resulted in favour of the lower rated player?

Yes I (2k) lost a game without komi against ngothonghy (4k) but in our game, “handicap minus one” was equal to half handicap.