Disqualification from tournament due to timeout

It doesn’t happen in blitz tournaments.

Oh! That’s great and someone should add it to the docs. What about live?

If the mechanics are there it’s probably just a little tweak to the code to make it work the same way for correspondence.

Remember that tournament directors can still disqualify truly inactive people. And if they don’t, the cost is only that the inactive player sticks around for one more round.

Correspondence tournaments can take long, I bet there are many inactive tournament directors. Sticking for ‘only’ one more round can mean for an opponent to play in a 10 players group and only get 3 opponents. I’m not against making it less strict than today, but this seems like going too far to me.

As I said in the original post, this was not the last game I completed this round, and so it is inarguably not one of the reasons that the tournament lasts years. That simply does not apply here. I also haven’t taken any vacation, unlike many of my opponents – if time is the primary concern, why is unlimited vacation ok? The answer, of course, is that this is a very long tournament and it would be unreasonable to expect every player to be consistently available over that entire span. Some leniency is warranted and makes it a better experience.

… which brings us back to my original question: why so strict about only this? You haven’t offered any justification for this particular solution, or addressed any of my suggestions. Why not allow players one warning? Even if you will not accept a two- or three-strike rule, why not warn players before the first timeout? Saying only “timeouts are detrimental” is not productive.

one of the first games I completed this round

what game do you refer to?

As I said in the original post, this was one of the first games I completed this round, and so it is inarguably not one of the reasons that the tournament lasts years.

Sorry, I think I didn’t specified the object of my sentence clearly enough and you took it too personally.

By this I am not meaning that you specially is detrimental to tournaments or whatever, as you pointed your specific case is much more specific and I agree. I only mean that you fall in that general group and my opinion is that the general rule set should not try to make this distinction.

And since a game may last months, two/three strikes rules would not work well neither for the tournament. For the player it is better to just join another tournament if you think you are willing to go to the end.

Agreed, this point is important for understand why a 3-strike rule could have negative impacts on other players.

The two changes I think would make sense (IMHO):

This game, finished a week ago. I need to correct myself here, actually; it was not one of the first games, but around the middle (2 remaining afterwards). That my bad and I’ll edit my earlier comments correspondingly.

[quote=“Fabrício, post:12, topic:43621”]
Sorry, I think I didn’t specified the object of my sentence clearly enough and you took it too personally.[/quote]

Sorry if my response seemed that way! I wasn’t taking it personally, I was using my game as an example of how a lack of rigid ruleset can have bad outcomes when it doesn’t account for nuances. The fact that many of the people in this thread agree that there is nuance in this case, and that the result is unfortunate, to me indicates that we also agree (on some level) that the ruleset is too rigid. The question then is: is there a better way? Or is that infeasible? In my opinion, it is feasible, which is why I posted! It would be unhelpful to post without offering an alternative

Maybe I need to clarify – I’m not trying to say that you can’t disagree, but that saying that and that alone is not productive. The original question is about the incentive structure implementation, given that we all already agree timeouts are detrimental.

I have the impression that you may have missed the game info:

The info about timing out in a game was there, but hard to find (especially when you are new to OGS).
Bad luck, but maybe it leads to something good.

IMO there should also be a warning of some kind

On this, there is this setting: 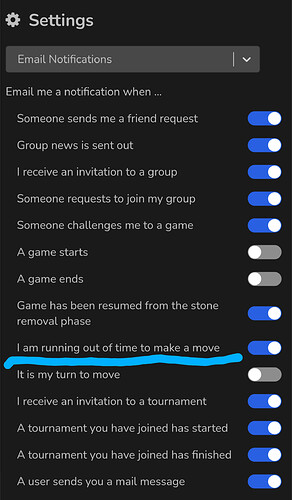 Sticking for ‘only’ one more round can mean for an opponent to play in a 10 players group and only get 3 opponents.

What I was proposing is to not disqualify players for timing out in the middle of a game. Or give them a button to rejoin. Surely it isn’t common for 70% of the participants to become inactive after already playing some moves? And inactive players wouldn’t go click a button.

Well, you offer two options and correctly point out that one of them would invalidate my point.

Yes, a rejoin buton may work. Just not disqualifying players for timing out in the middle of the game wouldn’t in my opinion. And it doesn’t need 70% timeouts, because those timing out will all get few points and consequently end up in lower groups (talking about similtaneous McMahon here). Also, the likelyhood of people dropping out this way is greater in the weaker ranks (people stopping to play after a few weeks). So if you are a weaker player getting very few opponents in later rounds is a real possibility with dropout rates much, much lower than 70%. I played on littlegolem for a long time where for some time they didn’t throw inactive people out of the league system and that was just horrible. (They’ve changed it since if I recall correctly.)

Short version: rejoining, fine with me, same solution as blitz today, please no!

Also, the likelyhood of people dropping out this way is greater in the weaker ranks

For simultaneous McMahon it still doesn’t seem reasonable to disqualify players unless they timeout of all of their games in a round.

If your worry is the weak players who can’t consistently finish games (how common is that?)

Not at all. There are people who just try out go for a couple of weeks and then drop it. Naturally these tend to be weaker players, sinply because few make it to dan in 6 weeks.

Actually, after thinking a bit more, I think my posts so far have missed the real question at hand: what is the root problem this rule is intended to address? Answering that will help us get to an optimal rule.

What I’m trying to say is: timeouts themselves are not actually the problem. They are no worse than resigning with one minute remaining, and no one would suggest disqualification for letting the time run low like that. The root problem is inactive players abandoning the tournament without clicking the “leave the tournament” button; timeouts, long-running tournaments, and dull later rounds without active players are the symptoms.

Unfortunately there’s no way to measure that directly. So we have to use a proxy – like timeouts, which does a decent-ish job. But, like all proxies, it’s imperfect, and rigidly designing a ruleset for the proxy instead of the root issue will inevitably result in occasional false positives.

That’s why I think there should be alternatives like a first strike (with a warning) or a button to rejoin (possibly with constraints, or requiring director approval).

I’d be happy to implement this myself if everyone agrees on it as a solution. It’s been a while since I’ve used Typescript or React but shouldn’t been too hard to figure out.

I think it should be on the TD to bring people back. It should be more obvious that time out disqualifies.

Actually, I usually have the opposite problem, people who have timed out and disqualified holding up the whole round.

I agree that a rejoin button would correctly solve the problem of inactive players.

Hi, I ike the idea, that the TDs could decide, if they want to overrule the general rule set, and bring people back to the tournament, when they were disqualified due to a timeout.
Disadvantage: If TD is not longer available, there is no possibility to get back.