Double elimination is in TATTERS

The final game of a double elimination tournament should have a bracket reset if the player from the losers side of the bracket wins, if the player from the winners side wins, tournament ends. otherwise there should be a finel, deciding game. otherwise it is unfair and somehow strategically viable to lose in order to skip hard battles and only win once in the finals.
SOLUTION:: add a conditional game when the losers side opponent wins.
absolutely urgent!!!

Personally, I agree with you. To my great shock, as I’m sure it will also be yours, the current implementation is apparently the more common of the two options, and that’s why it was chosen.
(doesn’t make sense to me either, but that’s how it is unfortunately)

Sensei's Library, page: Double Knockout Tournament Format, keywords: Theory, Tournament. SL is a large WikiWikiWeb about the game of Go (Baduk, Weiqi). It's a collaboration and community site. Everyone can add comments or edit pages.

The initial decision clarified as a design choice:

This is one way that a double elimination tournament can work, it’s not a bug but rather a design choice.

You Should Have to Lose Twice to Lose Double Elimination Tournaments

It seems unfair that someone who wins all games except the final doesn’t get another chance. I have seen other double elimination formats where you must lose twice in order to be knocked out. Thoughts?

Worth noting that Wikipedia says otherwise (but not in the context of Go):

Jacq’ed Up: NCAA beach volleyball’s double elimination bracket has a flaw in the system

My main objection is that the format is call “double elimination” - sounds simple enough, if you lose two games you’re out… but with the current method, if the winner of the losers bracket wins “the final” they’re declared the winner for some reason, despite there being two teams that have only lost once each (and in a lot of cases, both those losses were to each other, so even head to head they’re tied 1-1).

But, this isn’t my hill to die on lol. I am very much in favour of “true double elimination” being used, however

You Should Have to Lose Twice to Lose Double Elimination

anoek has stated that fixing this would depend on overhauling a great many other things on the back end, and will not be happening any time soon

unless this changed in the last couple years, it might need a lot more dedicated campaigning to see a change

Well according to some posts before, he was working on an overhaul of the tournament system so all hopes are in.

Hi All, We’re testing out self managed tournaments using OpenGotha. You can find some documentation on the subject here: OpenGotha Tournaments · online-go/online-go.com Wiki · GitHub In short, you can now run a tournament and use OpenGotha to deal with pairings (which supports automated pairing with manual adjustments), and supports adjusting ranks for players to whatever you want, for purposes of pairing. It also supports adding players to an ongoing tournament, have players only participate …

Did you know that opengotha supports team tournaments? Not sure if it’s rengo or a way to organize pairing by team vs team (1vs1 games)
See:

I suspect that would be multiple 1v1 games, as they played in Hikaru no Go… that would be cool! But well worth looking into to clarify… also, that original OpenGotha implementation thread is suspiciously short… might poke it for an update haha

Yes. I never organized tournaments here, and opengotha is for computers owner only, so i won’t be able to test it. Still looks to be a great new feature.

opengotha is for computers owner only

You don’t own a computer?

No my GF exploded it. And i’m just poor.now.

mine is just hanging on haha, got it second-hand 5 years ago… definitely long overdue for an upgrade but gotta watch the wallet a bit closer these days. Could technically buy one but don’t think it’s the right time…

Last year I was tournament director for a casual 8-player chess tournament for some friends of mine. We used a website called challonge.com to handle the bracket for a double-elimination tournament. While setting up the tournament options, it was fairly straight forward to set the option to require two losses to be eliminated, even during the “final match”. If the finalist who is undefeated to that point loses the “final”, there is a bonus match played. And in our tournament, that is how it turned out. Everyone was satisfied that it was a fair way to handle it. 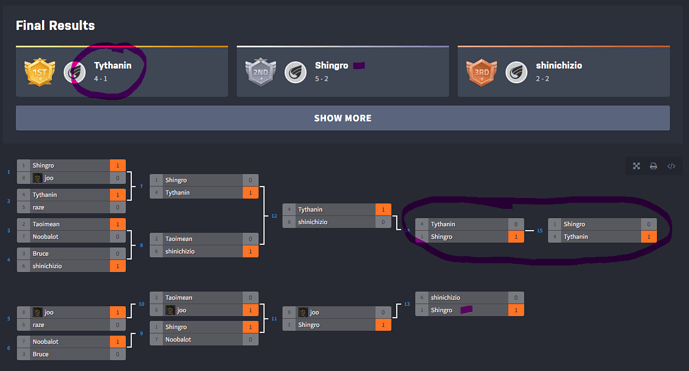 Inter-Discord Chess Tournament 2021_highlights1268×682 84 KB
You can see in the completed tournament bracket that the player named Tythanin was undefeated going into the last two games. The player named Shingro had come up as the challenger from the “loser’s bracket” below. Shingro had a prior loss, actually against Tythanin, earlier in the tournament. Shingro won their 2nd meeting, making their record even at 1-1 against each other, before Tythanin triumphed in the bonus game to become champion.

I’m relaying all this just to say that the website above works well for a casual double-elimination tournament that you can run with your friends.

Isn’t it the case here? Tanguy lost one but came back I won against Podpera? If so then that’s exactly how real life works. But I don’t remember the details, to be honest.

Isn’t it the case here?

I think if you need to rationalise it in some way you can think of the double elimination structure as a way to select the finalists.

In the Irish championship the format, at present, is a double elimination, but the final, (winner of winners bracket vs winner of losers bracket) is a best of three.

I think something like that would be more fair for example. Treating the final as a separate entity, giving both players an equal chance to win, either best of 1 or best of three, as opposed to making it so that one player has to only win once or the other needing to win twice in a row.

There could be any number of fluke results along the way that could make a theoretical stronger player end up in the loser bracket or winner bracket. So why give one player an advantage because of the route they took to the final? Why not decide the final as a proper fair/equal competition?

Why not decide the final as a proper fair/equal competition?

I think something like that would be more fair for example.

This works if you treat the final as some special entity separate from the tournament as a whole, but when looking at the overall tournament and not thinking about one particular round should or shouldn’t be the “final” then I think the fairest path for a double-elimination tournament is to keep pairing players until you have just one player left who hasn’t lost two games, regardless of whether or not that means two players play each other consecutively.

I think the biggest problem is we don’t advertise it this way… if you want to have the finals be special that’s fine… but we should say “Tournament d-e, finals s-e” (or bo3 or whatever you want) but when we only say “tournament is d-e” then often we will have people not understanding why they were eliminated after their first loss.

then I think the fairest path for a double-elimination tournament is to keep pairing players until you have just one player left who hasn’t lost two games, regardless of whether or not that means two players play each other consecutively.

I think if you want to get into what’s “fair” you can’t ignore things like seeding in the tournament, which is probably a bigger source of unfairness than the final game.

But yeah you’re right I think that not being clear on how things work, and where to find information on how they work if it exists is one of the biggest problems

Ironically, that makes it the easiest for the concerned members of the community to fix.