Excerpts from the AGA E-Journal 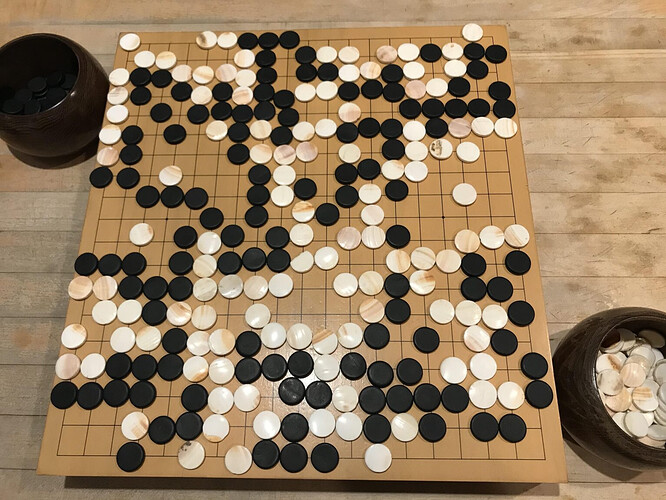 I started playing Go in the 1970’s. I only knew one other person who played, a friend whom I had taught. I didn’t know much back then, but I was enthralled by the beauty of the game. My friend had a set of stones; I don’t know where he got them, but I thought they were spectacularly cool. I had a waterbed that he thought was cool. So we swapped.

Years went by, my friend moved away, and I put away my prized stones and stopped playing. I picked it up again in the mid 90’s. At some point I lost track of those stones.

Lately I had begun thinking about them, and started looking around the house for them. But I couldn’t find them. I started wondering if I had mis-remembered the swap all those years ago; did I trade the waterbed for the stones, or the other way around?

Then, while rummaging around in the basement looking for something else, I came across two small cardboard boxes. And there they were!

I washed them carefully and have been playing with them these last few weeks. I’ve never seen any stones quite like them. Each one is unique. I love the way they look and feel. 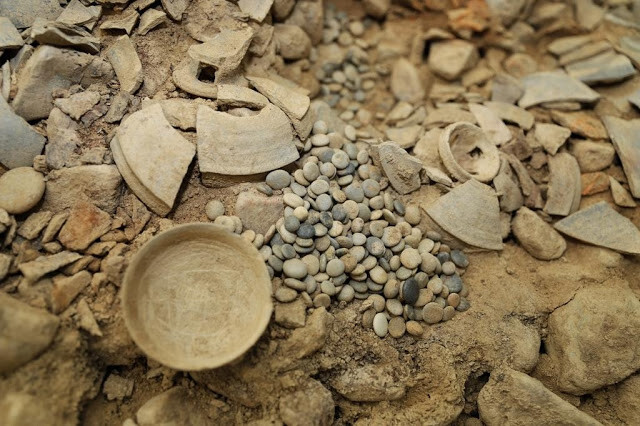 During the excavation of Silla ancient tomb No. 44 at Jjoksaem in Gyeongju, North Gyeongsang Province, ongoing since 2014, archeologists unearthed a variety of treasures including about 200 Go stones buried beneath the feet of the tomb’s occupant. The size and location of the tomb, along with the jewelry and other ornaments found inside, indicate that the tomb belongs to a young woman of very high class, likely a member of a royal family.

A few days ago I remarked that a lot of the historical references to Go, even in the late 17th century, describe there being 200 or 250 stones in use, not the 361, say, in the Ing rules.

This interests me because the average length of a scored game on a 19x19 board is about 250 moves, so wouldn’t one run out in long struggles of 300 moves or more?

Of course, less stones would be necessary to finish a game on a 17x17 board, but those historical sources also specify that the board was 19x19.

One minor explanation is that stone counting rules, which function practically like area scoring with group tax, enable prisoners to be returned and replayed onto the board without affecting the score. Still, though, the matter is puzzling to me.

Ah, an interesting thought occurs to me: perhaps good stones, being expensive, were handed down through families over many years.

The stones originally made for 17x17 boards (on which 200 or 250 would easily suffice) would have been found basically sufficient for play on the new 19x19 boards and preserved, resulting in the mismatch.

Of course, we have to accustom ourselves in this case to the idea that the shift from 17x17 to 19x19 may have not been at all smooth or universal, eg. with the 17x17 board clinging on longer in different parts of the Orient, particularly rural ones. 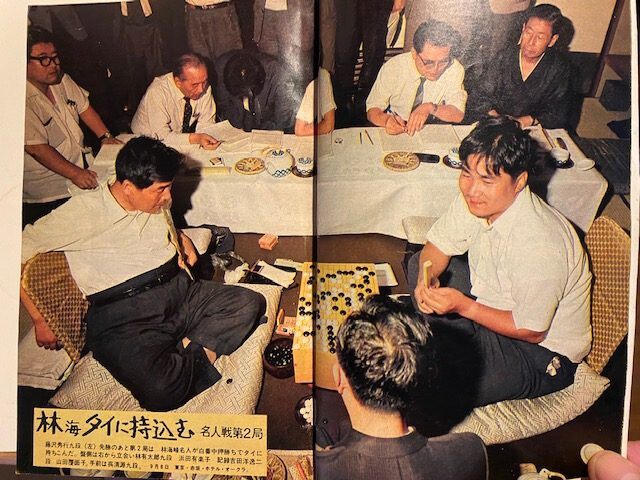 It’s nice to see the old style of seating.

In a bit of welcome good news in the midst of the uncertainty around in-person play during the global pandemic, an exclusive stadium for Baduk – as Go is known in Korea — is being planned for a municipality north of Seoul, reports Korea Bizwire. The proposed Baduk stadium will be located on the grounds of the former Defense Security Command (DSC) in Uijeongbu, Gyeonggi Province, according to an official at the city government.

According to the proposal, the Go stadium will cover an area of 10,000 square meters with four floors above ground, along with one basement level, and the city government is planning to complete the construction by 2023.

The stadium will include Baduk playing rooms, viewing rooms, education halls and exhibition rooms, as well as media rooms and reception rooms for broadcasting Baduk games. The city of Uijeongbu has already completed a feasibility test for the proposal and held a final report meeting on Tuesday. The project cost is estimated at 30 billion won, excluding land purchase costs. 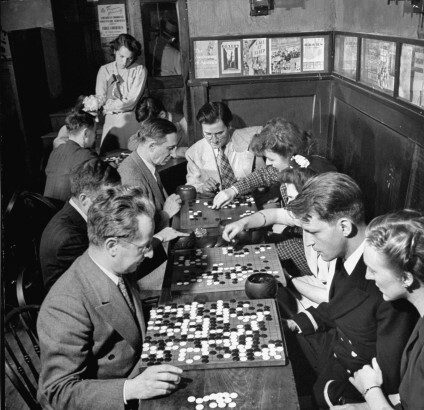 The navy officer (front right) is perhaps Lieutenant Ingersoll, a math teacher at the Naval Academy, who – along with Lasker – presented Emmanuel Lasker’s go board and stones to the Academy that same year (1942) as the photo.

I think this photograph is in the public domain, which would explain why the AGA published it.

Chumley’s apparently went under due to lockdown. 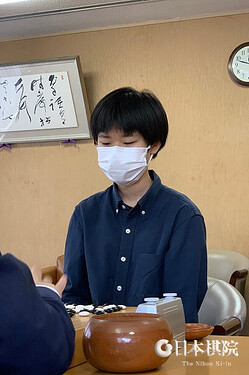 Playing black, she lost to Seki Kotaro 3P in Preliminary B of the 30th Ryusei tournament. She resigned after 148 moves. Incidentally, a reporter asked Kosumi if she was thinking of her father in choosing her navy-blue shirt and she answered, yes. Cho U is fond of black and navy-blue clothing; maybe Kosumi will make it a family tradition. 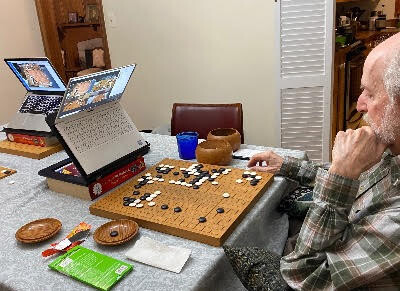 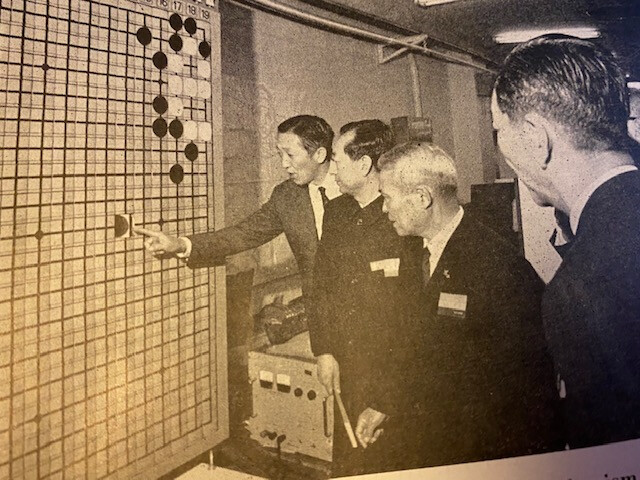 [In 1970] a go computer was demonstrated by Toshio Ikeda of Fujitsu. The computerized board, 2 meters square, could solve “any problem given to it” but could not play a full game. A steal at $30,000 dollars. The article concludes “one day we may yet have a computer become a pro!” Pictured next to Ikeda is Go Seigen. Ikeda was an avid go player and rule expert, his “On the Rules of Go” was published posthumously by Fujitsu in 1992.

Seventy players came out for the first day of the first-ever Midwest Open held in Columbus, Ohio. “The open division is sporting a highly competitive field of 14 high-dan players in a show-down for the championship title,” said organizer Devin Fraze, who also serves as Central Region Representative on the AGA Board. Event sponsor BadukClub is streaming the top board with commentary by DanielML on the club’s Twitch channel.

The Winter Qualifying Tournament for new professionals next year was held in October and November and concluded on November 24. Usually the top two place-getters qualify as 1-dan, but for players from outside the Far East there is a rule, known as the Special Qualification for Overseas Citizens, according to which a 50-50 score earns you the status of a probationary 1-dan. Two players have just qualified under this rule. They are Chang Fu Kang of Malaysia and Fitra Rafif Shidoki (this spelling is just a guess) of Indonesia. They both scored 9-5 and finished 4th and 5th respectively in the 16-player tournament. Chang was born on January 30, 2003 and is a student of Hong Seisen 4P of the Kansai Ki-in. He learnt go in Shanghai as a preschooler; he wanted to become a pro, but thought that he might have trouble as a Malaysian. Fortunately, he heard about the Nihon Ki-in system and has been studying in Japan since January this year. Fitla was born on August 12, 2002 and has no teacher. He commented: “I want to do well, so people don’t think I’m weaker than regular professionals.” Although his parents are Indonesian, he was actually born and brought up in Tokyo.

The last player to qualify under this system was Antti Tormanen of Finland four years ago. (Probationary players become full-fledged professionals when they earn promotion to 3-dan, which requires 50 wins. Until then, they receive just half of the regular game fees.) The new pros will start their careers on April 1. 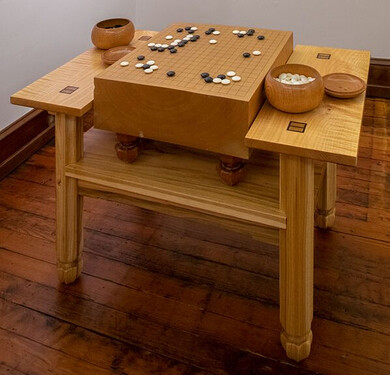 Playing go on a traditional goban is one of the joys of the game. But aging knees pose a painful obstacle. Former AGA president Phil Straus elegantly solved the problem with help from fine woodworker Sylas Navar. The table he designed for Straus allows the traditional go board to be used while sitting in chairs. It’s made of hickory and flame maple with walnut inlay, which complements and extends the aesthetics of the goban, where the grain and glow of the wood are an integral part of the game. If you’re interested in such a table, contact Sylas at ironwoodartistry@gmail.com or check out his website. 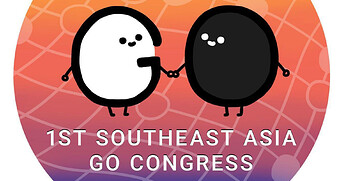 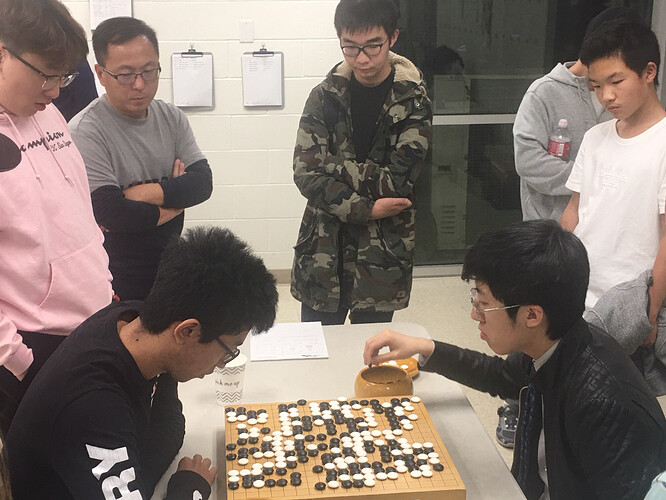 Has anyone got a link or information on the South-East Asian Go congress that was held in late August? It would be much appreciated.

Interesting… unfortunately, no-one did have either to give him.

Can confirm, good tool to help expand one’s understanding of what’s happening on the board.

In German of course
What do you mean?
One speak French German Italian and more in Swiss.

Never too late we say

Incidentally, a reporter asked Kosumi if she was thinking of her father in choosing her navy-blue shirt and she answered, yes

Thats always upset me. Kind of question will never be asked to a pro male. As if there is nothing better to write about a player. Note that the same kind of report appeared frequently in Goworld when reporting on female go players.

I mean just imagine yourself in GuLi you just won an important game and the reporter comes and ask you why you like to wear jeans instead of today’s black fashion pants?

I dunno if it’s common practice and easy to configure but I find awesome the idea to use a real go set to play online.

Did anyone try it? Good question.