So under AGA rules, the same dispute about the status of black’s stones would happen and there would be a normal resumption with the same outcome, or white would self-atari to “kill” black even before passing.

In hypothetical play, does the player have to demonstrate correctly in the very first try? I mean I know for example bent four is dead. What if I don’t know why or how or somehow make a mistake in the first try?

In a way, if I don’t know how, they are not really dead. However, can I get around by requesting ref/mod to rule it?

under Japanese rules the resumption is hypothetical.

Japanese rules also explicitly allow resumption of play, which is separate from the hypothetical settling of life and death disputes. I would interpret the “resume game” button on OGS as offering that option, which even gives your opponent the first move (I think).

It seems that neither player was aware that life and death needs to be settled with hypothetical analysis, and white incorrectly continued play in the resumed game. White should have just passed.

The problem with using the resume game feature of OGS to perform any hypothetical life/death analysis, is that playing additional stones to capture stones reduces one’s own territory, so it does not really work.

Because hypothetical play is not supported by OGS, I think the only “proper” solution on OGS is to call a moderator and hope that they are strong enough to settle the dispute correctly (without resumption or hypothetical play).

Can a moderator change the marking of dead stones in a game while it is in the scoring phase?

Can a moderator change the marking of dead stones in a game while it is in the scoring phase?

Nope, we can only gently ask a player to stop cheating before banning them

But we can decide the game in either player’s favour, or let the AI do the scoring automatically.

In hypothetical play, does the player have to demonstrate correctly in the very first try?

The Japanese rules assume the players play perfectly in the hypothetical resumption, which might make sense for professionals but for weak amateurs is problematic. This was one of the main arguments for us adopting AGA rules in Britain: make the resumption part of the game and subject to the failings of the weak players. It also avoids the need for a strong player as the referee, which can be logistically challenging (Geoff peaked at 1k, is lower now).

You don’t have to adopt AGA rules for that. You could just use pass stones only in resumed games (while requiring both players to play the same number of moves after resumption).

You could just use pass stones only in resumed games (while requiring both players to play the same number of moves after resumption).

Are you suggesting this as a procedure for resolving life and death disputes under Japanese rules? You could do this, but then you would not be using the Japanese rules, and would be essentially playing with area scoring (at least in the sense that a player could force the life/death status and outcome to be settled by area scoring conventions, if they don’t like how Japanese rules and territory scoring decides it).

Yes, this resumption would not be the same as hypothetical play under Japanese rules. But when both players play correctly/perfectly in such a resumption, the Japanese score at the moment of the first 2 passes would be preserved by the pass stones after resumption. So it’s not area scoring.

I think the only issue is ko fights in (pass-stone) resumption. Players would have to remove all ko threats in this special resumption phase before killing (for example) a bent-4-in the corner. That’s fine and it would still work to preserve the Japanese score. It’s just cumbersome.

The only problem arises when there are unremoveable ko threats in the resumption phase (like some small seki somewhere on the board). In that case, bent-4-in-the-corner might live in some cases (similar to AGA/Chinese rules).

If OGS were to implement such a pass-stone-resumption after a scoring dispute, it would not strictly follow Japanese rules, but in practice it would be a very close approximation of Japanese rules, while avoiding the need for a strong referee to settle disputes as well as the intricacies of hypothetical play.

The only problem arises when there are unremoveable ko threats in the resumption phase (like some small seki somewhere on the board). In that case, bent-4-in-the-corner might live in some cases (similar to AGA/Chinese rules).

Yes, this is precisely the kind of situation that can cause issues. However, that’s not the only problematic pattern.

Here’s a fun position, not quite bent four, but pretty closely related: 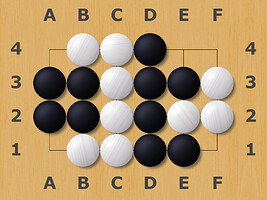 But when both players play correctly/perfectly in such a resumption, the Japanese score at the moment of the first 2 passes would be preserved by the pass stones after resumption. So it’s not area scoring.

However, it’s not really Japanese scoring since life and death status in various edge cases are changed. From the perspective of the adherents for formal application of the Japanese rules, those weird edge cases are viewed as key features, rather than bugs that should be removed.

KataGo uses an even closer approximation of the Japanese rules. See https://lightvector.github.io/KataGo/rules.html (and click on “Japanese-like rules”). However, it introduces its own intricacies that could be tricky to understand.

Still, it would be an improvement over OGS’ current handling of Japanese rules (i.e. whithout hypothetical play and without rules about edge cases like those).

And indeed an alternative way of dealing with status disputes while scoring is to use KataGo as a referee. KataGo’s judgement would be binding in any dispute (and no resumption after KataGo’s ruling). That also avoids the need for strong human referees.

From the perspective of the adherents for formal application of the Japanese rules, those weird edge cases are viewed as key features, rather than bugs that should be removed.

I like Japanese rules, but that just means I like territory scoring (with points for captured stones and no points for dame) and I dislike pass stones and superko.

I think there are certainly things that might be improved in Japanese rules. For example, my gut feeling is that some enclosed intersections in seki should be worth points. And I also feel that there is nothing wrong with integer komi (allowing jigo). And I think the hypthetical play to resolve should be replaced by some better method such as the pass-stone procedure described above.

It sounds like you would like New Zealand rules, but with some sort of no-result procedure (for things like triple ko)? Not sure about your stance on suicide and free-placement of handicap stones.

Counting a point for a captured enemy stone is almost the same thing as counting a point for each of your own stones that have not been captured, since all that really matters is just a difference in the scores. The “pass stones” trick from the AGA rules is a just codification of this little accounting trick to essentially obtain the area score margin while using territory counting mechanics.

Even though the dame are worth points, not all of them need to be filled, when using area scoring. If there are an even number of inconsequential dame left, then both players can safely pass.

I don’t like New Zealand rules at all actually, because it’s area scoring, suicide and superko (and a strange version at that). The only thing going for it is integer komi (but integer komi is not that important to me). And I’m neutral about free handicap placement.

What I don’t like about area scoring (or AGA territory scoring with pass stones, which is equivalent):

I think Spight’s revision of the Japanese rules comes close to the sort of rules that I prefer.

I don’t think that Japanese-like territory rules really punish trolls either. In order to perceive it as a punishment, we would have to assume that trolls care about the difference between losing by X points and losing by more than X points. Often, I think that some trolls will gladly worsen their own score in order to waste the time of their opponent (or maybe even hope that their victim times out or abandons the game). Further, there are often time wasting moves (like playing needless ko threats) that do not reduce one’s own score. Hence, I don’t think this aspect of territory scoring has such a large impact on discouraging trolling. On the other hand, I think the complexity of resolving life and death disputes under the official Japanese rules (and similar territory scoring) systems introduces considerably more opportunities for trolling and abuse, even in the form of a player exploiting a novice by confusing them about the correct procedure.

Depending on how exactly one implements pass stones during resumption, one might inadvertently introduce this into a territory scoring system as well. There could be some situations that you might not want, such as: 1) dame being worth points in the resumption, and 2) pass fights may be possible.

You could just use pass stones only in resumed games (while requiring both players to play the same number of moves after resumption).

Let’s the say the players are actually tied in territory score, but they have left an odd number of (inconsequential) dame empty before they both pass. Then, if one player disputes the life/death status and they resume play with pass stones, the player that goes first should be able to win by taking more dame (and giving one fewer pass stone), if you keep the provision that both players need to play an equal number of times after resumption. This would effectively make the dame worth points, so to prevent this, both players need to fill the dame before first passing (and possibly resolving life and death disputes in a potential resumption).

If you drop the provision that both players need to play an equal number of times in the resumption, then I think pass fights may become possible.

The reasoning behind a komi of 7.5 is that it jumped up by 2 from the previously commonly-used value of 5.5. Since the area scoring margin is most often odd, and a komi of 6.5 is unlikely to behave substantially differently than 5.5. However, whether or not the komi is too large or small is a separate and resolvable issue.

Player A had said to Player B that they should begin the dame filling; B had not responded. During the dame filling, A made a careless move that resulted in B being able to cut off some of A’s stones. A protested that the dame filling phase had begun and B claimed that he hadn’t heard A, being somewhat deaf.

The relation to your comment is that, in the discussion that took place, B claimed that A had, earlier in the game, moved a stone and that B hadn’t complained.

I came across that a while back on Facebook and reposted it here. It could’ve even been @Uberdude that I seen post it for all I remember

Or I think it might’ve been Rob van Zeijst that mentioned it.

Again I’m reposting things I’ve read on facebook, which are awful to link to and find again but I read about this example of some controversy in endgame. 26th Japanese Kisei, title match #5 Ryu Shikun 7p (Black) vs. O Rissei 9p (White) W+R (5.5 komi) The go4go link https://www.go4go.net/go/games/sgfview/79 and on OGS. [image] There’s discussion of the game here but I’ll highlight the main section in the link in case it dies or you don’t want to follow it: History of Topics 2002 | Nihon k…