this is more a feature request.

I was willing to give teaching games to very weak players, I selected automatic handicap stones and, when trying to limit the strength of opponents, realized that this kind of games cannot be created on OGS.

A post was split to a new topic: Why do we have to set both limits on rank when matching?

Is this the custom game or the automatch?

As a guess, maybe it’s that after 9 ranks you either need to give more than 9 stones (which probably doesn’t have standard placement in japanese rules?), or 9 stones + extra reverse komi, which maybe it just isn’t set up for?

Actually checking the custom game settings, if the game is ranked you can’t choose a handicap of more than 9 stones, only in unranked regardless of the ruleset. Similarly there’s more restrictions on what rank range you’re allowed to restrict to for ranked matches, which is the ± nine ranks.

It does seem intentional anyway.

The reason is because the ranking maths breaks when the difference in skill is too big, and forcing unranked in this situation has the same effect.

Suppose you are a Dan and you give someone who is 20kyu 50 stones.

Then they beat you. What should be the impact on your rank?

Answer: none. It doesn’t tell us anything about the rank of a Dan or a 20kyu if we learn that a 20kyu beat the Dan with 50 stones.

This extreme case illustrates what is going on as you go past 9 stones: it enters the realm of irrelevant uncertainty as far as ranking is concerned.

So just play it unranked.

Why deleted? It seems like a legit question to me?

The answer is “handicap game are ranked as per the effective rank of the players after the handicap”.

So if you are1d and your opponent 9k and you give them 9 stones, the game is ranked as if it is even.

This means if the 1d wins they gain rank as if they beat a 1d, and if they lose, they lose rank correspondingly.

@Eugene,
I think that we agree that the 1Dan player willing to play as white a 9 stones handicap is now allowed to play a 9d player (this makes an effective 18 stones difference and I expect the ranking maths to be broken) and cannot play a 12k opponent.
I find this behavior an odd one: I expected the window of allowed grades to be centered around the effective rank of the player after the handicap. That’s all.
Thanks

I find this behavior an odd one: I expected the window of allowed grades to be centered around the effective rank of the player after the handicap.

The window of allowed grades is caused by the reducing effectiveness of handicap as a sensible compensation, as much as anything.

At more than 9 stones of handicap, the match is no longer anything resembling a match of even players for the purpose of determining rank from the outcome.

If this is the problem then make the window more narrow but consider centering it around the right grade. This is my point.

Then I understand that for the sake of simplicity one can live the matter as it is since people are free to play any non ranked kind of handicap stones and nobody will suffer of the fact that the window is centered around my grade before handicap.

Maybe I should say how my need started.
Last Sunday I wanted to play against a weak player so I tried two settings:

I then realized that in both settings, because of the limitations on the ranking are applied before handicap, then the window of people allowed to accept the game was so thin that I had to wait hours.
That’s all.

I may not be following what you mean.

However, I don’t agree that a 9k person should have a “window around 1d” after offering 9 stones.

But they do and are able to play games like that are they not? I can’t check with my current position in the site ladder for 19x19 games, but can’t I challenge a person more than 9 stones stronger than me or weaker than me (to an even ranked game?) if they’re above me and close enough in the ladder?

It definitely looks like you could get a ranked game against someone more than +9 stronger or -9 weaker in tournaments, sitewide or title etc. This one says it’s ranked in the info at least 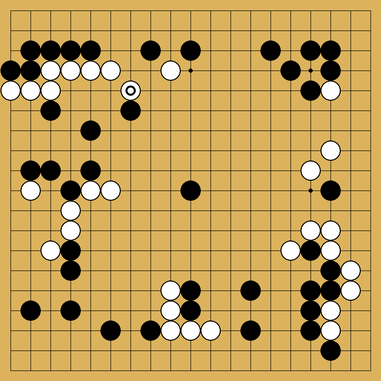 Also, this is why I deleted my post and asked a question here Why do we have to set both limits on rank when matching? instead. I thought it was more suited to that discussion.

I understand that my English is not clear enough, but are you making any effort to understand what I say? You are not even trying to stick with the examples we made above. I quit.

I actually think it would’ve been less confusing if taatelikakku’s post wasn’t split.

While they did indeed have a different agenda - in that they wanted to be able to set upper and lower limits separately/independently, i.e. upper but no lower or vice versa - I do think the problem is more or less related. I find I’m asking the same questions/having the same discussion in both threads.

If I understand correctly @jimifiki would like the following

I think the reason this might be reasonable depends on this - is it possible that while I can search for games against opponents who are ±9 stones stronger/weaker than me, don’t I also have the option to prefer no handicap stones? In theory you could play a not very even game (no handicap) against someone much stronger/weaker. However I think if I choose this ranked setting, the komi is still locked to automatic, so presumably it will award komi/reverse komi in such a way to adjust the ranks to even for rating purposes?

Again the reason the two threads are similar is they’re both asking - why are the rank restrictions the way they are? And something I’m trying to understand in both threads is that while it seems like the purpose is to restrict ranked games between players that are too far apart in ranking, it still seems that ranked games of this sort can in theory (and in practice) happen in the ladder and in tournaments anyway.

Unless of course these games are (effectively?) annulled for ratings purposes? In which case I think the descriptions called them rated seems like a minor bug.

It doesn’t hurt to allow higher than 9 rank differences, it just doesn’t help either. People looking for a ranked game I feel tend to want a game that’s going to affect their rank, a 1d winning against a 15k though for instance is going to have a negligible effect, so it’s not worth playing a serious ranked game, better to play an unranked teaching game. For now yes, we are going to be implementing some stuff to better handle that scenario though.

So the 1d beating the 15k has negligible change on rankings but suppose the 1d has an off day and misreads something important - if the 15k wins presumably the change isn’t negligible?

I think this is Haze_with_a_Z’s point in the other thread. The idea that you could win, that while unlikely, is nice.

Ranked games are useful because people tend to focus more on the ranked ones. Playing as white when 9 black stones lay on the board is intimidating, having a ranked game means you play at your best and also means that your opponent makes her best.
If I were asked for advices I would say the following: