Yes I was thinking more dan+ handicap games. It’s important to keep in mind that even pros play handicap games, for example Waltheri's go pattern search - find position in pro games (see games from 20th century on the left). Though these days they probably keep it to training games only.

They play some low handicap games with bots

I guess that falls under training games too.

Komi could be fixed by a pie system

Funnily enough, value of handicap stone is roughly 2 * π, so one could just use tau*rankdifference and round it up to closest .5 with pretty good results. Maybe someone more obessed with maths could explain why pi and komi are so closely related? xD

I guess the main reason for tourneys to not use reverse komi is because it is usually very disheartening for the weaker player. With handicap stones black can fight back and force white out of his/her comfort zone, but with negative komi its often just a struggle to survive and not die big.

I guess it wont be that bad if players are somewhat close to eachotehrs ranks, but at larger skill differences it often makes the game unenjoyable for black

More stones means more fighting and tricking. I don’t like it.

Here is an even game between me and Amybot_ddk:

I was white.
If we had -160 pts reverse komi the chart would have been like this:

So, what’s the difference?
If we had -180 pts komi we could even say that Amy won.
But is it really so?

Unless a player is able to draw that chart in his mind while playing (I’m not) that’s pointless.
Knowing in advance that I have 180 bonus points doesn’t change my way of playing.

Of course, when this is the scenario:

that’s completely different: they are able to draw that chart in their minds while playing.

I’m not sure what chart exactly you’re talking about, but if by that you mean assessing whether you’re ahead or behind, I think it’s a fairly basic skill anyone from SDK upwards should be able to do. Obviously not at all times and only accurate as far as their strength goes. I myself still have games where I struggle to tell who’s ahead, but I’ve been able to do so in some of my games even back when I was still ddk.

Since fair komi under japanese rules is 6.5, this means black passing on the first move is a 13-point mistake. Each additional handicap stone can be thought of as white passing once in the beginning, so it’s more correct to say that the value of a handicap stone is roughly 13 points. This theoretical value is pretty close to what we see if we ask KataGo:

A common rule of thumb is that each handicap stone is worth 10 points. This approximation works well partly because of the fact that what we call “1 stone handicap” is really “½ stone handicap” (we just remove komi, instead of forcing white to pass once in the beginning). So since the first handicap step is smaller than 10 points, and subsequent ones are larger than 10 points, it evens out a bit. You can see that for 2, 3 and 4 stones the lead is close to 20, 30 and 40.

For larger handicaps thinking in terms of score lead (especially reported by superhuman AI) becomes gradually less relevant, and KataGo has less “experience” with such hugely unbalanced positions anyways. But the ~13 points per stone actually remains remarkably accurate up to 9 stones if you ask KataGo! (there is not a lot of “diminishing returns” until later)

That is assuming “perfect play”, achieving which is the entire idea of the handicap stones. This is the main point why I dislike reverse komi, because there’s no skill in making use of it, it’s simply in effect throughout the game.

Lately I’ve been experimenting with not trying to trick Black at all in handicap games.

If you find that White is constantly playing trick moves, remove some of the stones. So if the gap should be nine stones, try five, but ask White to play normally.

Just an idea, and not well suited to a formal setting.

I think it takes practice to learn how to play with or against handicap, whether it is in the form of stones or reverse komi.

In general, I don’t think it’s neccesary or even beneficial for white to overplay all the time if the handicap is correct.
I can understand than an inexperienced white player may go for that strategy because they are panicking a bit. But I don’t think that desparately trying to force mistakes by your opponent works all that well to improve your winning chances.
You need to be brave, but don’t take crazy risks hoping for them to blunder. Your opponent is bound to make unforced mistakes, so better stay calm and play good, active moves and take sente often. Be patient and try to slowly eat away their lead.
You may find that this attitude also improves your play in even games.

One definite advantage of reverse komi for high handicap is that you only have to count a small fraction of the board to estimate the score: 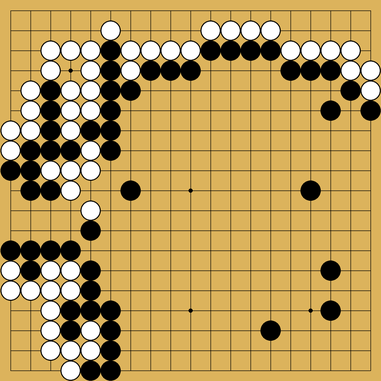 it is usually very disheartening for the weaker player.

I didn’t find these games disheartening at all. Either way you’re trying to build extremely secure shapes and maintain your huge advantage as long as possible, while Black plays amazing invasions and creates impossible amounts of territory.

I would say that if white played a regular 8k opening, such as splitting after the first invasion, etc, but took gote every time to continue to be overly defensive, the game would’ve been w+50 without any issues or fights I think. In fact for it to be at least w+20 white just needed a miai access to the centre from 2 of the corners on the left instead of clinging to the edge.

Pretty sure I could still make life in that center right now. ;D

Ofcourse it looks easy for stronger players. But it isn’t easy for weaker players, that’s the reason why they are not as strong.

I once participated in a full handicap 19x19 tournament organized by a relatively new go club that had many beginners participating. There were games with 9 stones handicap and 150 points reverse komi, but most of those games were still won by white, with black having only 1 or 2 small living groups in the end (most of those beginners still enjoyed those games, as far as I remember).
How this can happen may be incomprehensible for stronger players that only play against other stronger players, but this is how it is. Go is not an easy game.

Just imagine that every second move you make is like this, or worse: 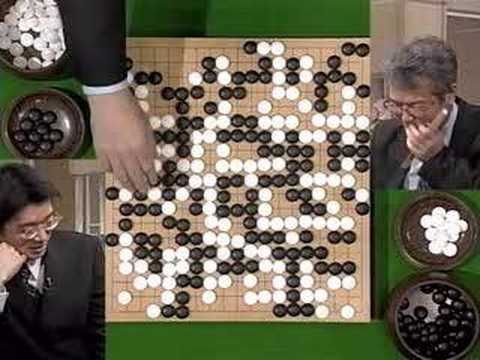 The source escapes me, but I’ve read and kinda have to echo the spirit of “Every game beyond 3 stones is a teaching game”.

Sort of, yes. But some handicap games are competitive and then it’s not really a teaching game anymore.

It’s fun to see Hwang Inseong give 5 stones to EGF 4ds and win.

Games in former times with handicap between 6d to 9d players on kgs were delightful too.

I’m actually proud of winning 1 of 4 games with 4 stones handicap against Cho Seokbin ~10 years ago, who I think is similar strength as InSeong Hwang (8d EGF).