I think this is how we talk:

Hmm, but when saying “I will give you two stones” do you not actually mean “put two stones on the board”?

If someone told me they’d give me 5 stones, I would assume I get 5 star point stones starting. I always understood that komi is reduced for all handicap games as a given, not that it should count as a stone in any sense. Then just treat one stone as an exception since I’ll give you one stone sounds more like, I’ll let you play first, which black does normally.

For instance in books on handicap go, if you look up a 5 stone game, how many stones do you imagine are on the board at the start for black?

In a 5 stone game black plays 5 stones and after that white plays the first stone.

In a 1 stone game black plays 1 stone and after that white plays the first stone. Which you could also describe as: Black begins. No difference to a normal game at all in this respect. (So removing komi is what really happens in a 1 stone game.)

In a 1 stone game black plays 1 stone and after that white plays the first stone. Which you could also describe as: Black begins.

This is true, but I don’t think it helps.

In a 0 stone (no handicap) game black plays 1 stone and after that white plays the first stone. Which you could also describe as: Black begins.

See? You can’t escape from the fact that the difference between a zero stone game and 1 stone game is not one stone on the board.

It’s just stupid terminology, plain and simple. The cause of it is that not so long ago there was not such thing as komi, and one stone handicap really did mean one stone.

Then komi was introduced, and somehow it was seen as a suitable replacement for 1 stone.

Personally I don’t understand why the rulemakers chose to use komi as one stone. I can’t really see why the advantage that black has over white is “one stone worth”.

After all the years of experience it took to come up with the number 6.5 as the right amount of komi, isn’t it a bit too convenient that it happens to equal one stone? I doesn’t ring true to me - it just seems like someone saw a convenience and it became law (not that I have any idea how it happened - it just seems that way).

As black, would you give your white opponent a stone in exchange for komi?

not so long ago there was not such thing as komi, and one stone handicap really did mean one stone.

Interesting. So at that time black got to play 2 stones before white played the first in a 1 stone handicap game?

Talking about this definitely is confusing.

I have no idea what is being talked here. But my issue was that as an example: One day with a 17k was given 3 stones or so… Next day another or same 17k I was given 0 stone to me. Same thing it happened sometime ago of which I said nothing,

Hi, why not check their actual rating on their page before playing. i.e click on the name and screen shot their elo table and repeat for yours.

thanks, but you as many others have no understand my point.

I have no idea what is being talked here. But my issue was that as an example: One day with a 17k was given 3 stones or so… Next day another or same 17k I was given 0 stone to me. Same thing it happened sometime ago of which I said nothing,

I went through your recent game history to find what games you’re talking about. I still have no idea. Could you please give links to these two games? Maybe we can see something about their rules to help you understand what’s going on.

As a side note, you might want to stop berating people for “undo”'s. You do this consistently, and it’s a bad habit. You can request the undo, but your opponent is under no obligation to accept it. It’s nice if they allow it, but they’re not cheaters for continuing the game.

I don’t think it’s as much that we don’t understand your point as it is you haven’t understood the answers. Could you post links to the games you’re talking about and we can perhaps use those to explain it?

First apologies, I was trying to understand the questions you had but I got sidetracked/I sidetracked the discussion.

One thing that might help explain why you are or are not getting stones, are how are you starting the games? Do you just click automatch, do you create custom games, or join custom games, do you click to challenge a specific opponent or do they specifically challenge you and you accept? Etc

Just if there is some issue somewhere that could narrow down where. Also if someone challenged you and set the rules to not allow handicap, that would be an explanation in one instance maybe?

Or as others suggested maybe link an example game or two. I know you have shared a screenshot already.

This game has a reduced handicap of 1 (0.5 Komi, black plays first)

Iirc the handicap is reduced when one player has a deviation of more than 125.

Besides calculating your rank, the rating system estimates how precise it knows your rank. If it isn’t sure enough about your or your opponents rank, it doesn’t give the full handicap.

In https://online-go.com/game/21777305, the rating system wasn’t sure about your opponents rating, so it reduced it to 1.

First at all, you Still did not understand my Simple question, Brad. IF you understood a simple question you would have saved yourself being upset from my continuously asking for re do’s. For low ky’s people ask. Not a big deal. I am asked and I have no problem helping since I know that sometimes our fingers in the computer slips. There is No need to go looking into my profile. My question does not require such. Hmmmm

@Interestinggame, there’s no need to be insulting toward people that are genuinely trying to help.

It seems like you asked a similar question in the past, which was answered in this other thread that you started:

Hmmm. The automatic handicaps are not working. Now that my rank have dropped considerably I am not getting the handicaps. Something is wrong. See here the screenshot; [automatic%20]

As for this specific observation:

The “17k” displayed next to a players name is not necessarily the same as the actual underlying estimated rank used to calculate handicap stones. There is uncertainty and rounding errors that makes that misleading, as explained in other posts, such as: Handicaps and Automatic handicaps

K I will make one more try as everyone here seems to understand your question. Lets look at my profile page now 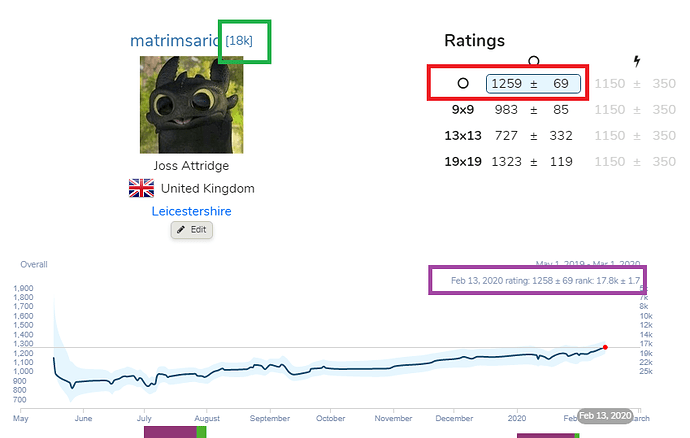 Now I have highlighted three boxes. In a red box is the global rating used for matchmaking. Here I have a rating of 1259 with a variance of 69. This means the system currently thinks my rating is somewhere between 1190 at worse and 1328 at best. This is because the glicko number is NEVER a fixed number it is always a bell curve of probability.

I have also highlighted my current kyu rating in a purple box. This says I am currently 17.8 kyu but with a 1.7 variance so between 16.1 kyu and 19.6 kyu. This is rounded up to the closest for ‘actual’ rating so my current displayed rating in a game is 18 kyu - as can be seen in the Green box.

Now the RED box is used for matchmaking not the GREEN or PURPLE boxes. You keep using the 18kyu in the GREEN box whereas you should be looking at the RED or at least purple.

Let us say I play someone with rating of 1500 and a 200 point variance so the system thinks this (14 kyu?) is between 140 and 1700 points. If he is matched against me then this might be an even game as my best rating is higher than his worse so we might be similar. Should I win then this will be confirmed and my rating will increase and my variance will decrease.

Take another example. I play someone with a rating of 1500 but a variance of 50. The system thinks this persons range is between 1450 and 1550. If they play me then I may get one stone as the system expects this person to be stronger. If I win this then I have beaten a stronger opponent BUT I had a stone advantage so it may be regarded as an even win…

Both the opponents listed above could be listed as 14 kyu but with very different handicaps.

Finally take note of the ratings before the game as they are adjusted immediately after (hence all the weird 'beat/lost stronger/weaker weirdness you can see).

SO in summary using a single Kyu figure means you have not got a clue what the matchmaking actually should be and ANY comment made is irrelevant. If you MUST use Kyu then use the 18.3 kyu ±1.7 from the profile page but better still the actual rating (less rounding and more accurate).

Hopefully someone who wrote the code can confirm as the figures above are examples from glicko2 systems I have written in the past. I also am assuming the global figure is used and not the individual 1919 , 99 etc etc.

This is correct; the only rating that matters is the overall rating. The others are purely cosmetic.

I will try this another way.

You get a “handicap of 1” if your difference in rank is 1kyu.

If you are a STRONG 17kyu and your opponent is a WEAK 16k the difference in your ranks is LESS THAN 1 kyu, in fact you are nearly the same strength. So you don’t get any handicap.

(see that quoted up there: probably the best way to say it)

Regarding passing in a ranked game to give a handicap, I can understand why this is undesirable, but there does not seem to be any alternative if someone wants to run a tournament with handicaps (13 x 13 and 9 x 9 tournaments: how would auto handicap work for large rank differences?):