I feel like I should have invaded center moyo, but didn’t know how to, and thought taking edges would’ve been good enough. Evidently not. 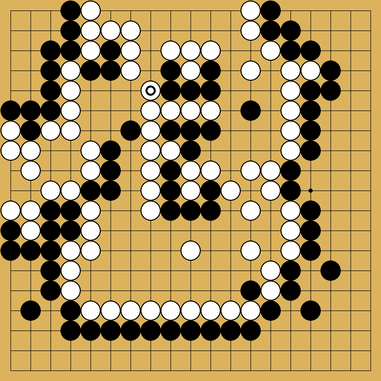 If they get all the centre then you do need all the sides to win.

In this game black actually only got 2 out of the 4 sides, so that’s not going to be enough.

Dwyrin says: if you need to invade, you already made mistakes earlier in the game.

As an example, after move 38 black had 3 strong corners, one weak corner and some stones surrounded in the middle.
Black already has points. White has only influence. So black’s ahead (as you can see in AI graph).

Following exchanges only made white center stronger and lost the game.

Move 39 could have been trying to live in the middle. Black would need forcing moves in order to place some stones in white’s moyo keeping sente. Menacing to cut on the left o to escape on the right could possibly work. Not easy though. But throwing many stones and sacrificing some of them could have done the job.

But actually black could have tried to just reduce white’s center menacing to connect from outside to those surrounded stones.
That also would work: if white keeps only half of his moyo, that won’t be enough to win the game.

gave some comments in game. basically you waited to long to invade.

Nice exploration in this game, try more times to feel better this kind of games.

if you need to invade, you already made mistakes earlier in the game.

I don’t really believe that one. (Very silly example 3-3 invasion on the fifth move, where’s the mistake?

Pre-AG dan: The mistake is in giving Black too strong of a wall early in the game.
Post-AG dan: It’s complicated.

I believe the verb “need” is key.
Do you really need invading 44 at 5th move?

Every once in a while this name appears in posts. Always wondered what or who that is. So now I know and you too.

Welcome to the BEST go club on the internet! Here you can find many of my Go Games and Go lessons recorded for your entertainment and education as well as so...

For older users it’s obvious, just like sense’s pages or Nick Sibicky…
but we should remember that other users aren’t old as we are.

Most of those resources are listed in main OGS “Other go resources” page:

I know it was a silly example.

For older users it’s obvious, just like sensei’s pages or Nick Sibicky…
but we should remember that other users aren’t old as we are.

Not really a problem, I am a happy explorer