Hi,
the black button in the top right corner is super useful to toggle among games, especially the one where it is my turn (the number indicates the number of games where it is my turn).
However, a game where I need to accept the dead stones does not appear there !
See screenshot which clearly shows I have to accept dead stoes but the black button is grey with number 0. It means I have to regularly scroll in my home page to look for such game (which would be in the middle of other games while the games where it is my turn appear first).
I typically have a dozen of on-going games, but some people have >100, and I notice they take ages to accept the dead stones, while they do rapidly normal moves, I suspect this is the reason.
Thank you for your attention 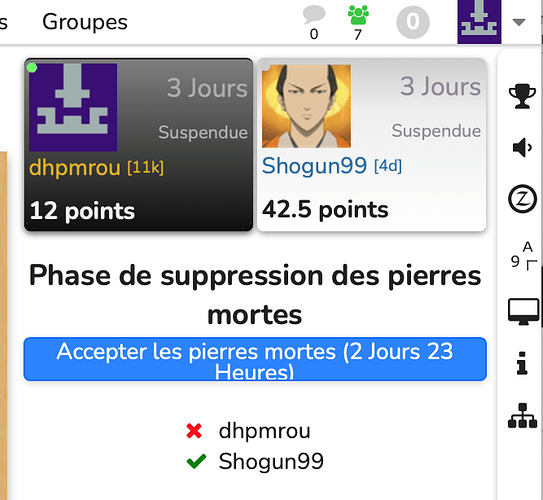 Unusually high number of games in one of my tournaments are stuck in counting due to players ignoring them. This must be why.

Combined with the bug that makes it get stuck if the clock counts down to zero without both players accepting they could take a while to resolve!

Yeah, the bug has been around for a while. The way it “works” is that once you visit the scoring of a game (even for a second) it disregards the move notification even though your action is still required. And this is easy to do by accident when scrolling games and whatnot.

Feel free to report such games, we will end them to save time if there is no other issue.

Feel free to report such games

Do you think it would save time for mods to DM the opponent something like “hey, I accepted the score, thanks for the game”?
Or people will be offended?

Oh, that’s just normal then and I was simply lucky in previous tournaments to not have these situations.

@teapoweredrobot one of the games is paused since 20 Oct 2020 according to “paused_since” field in API, a while indeed. But it’s ok, it doesn’t hurt anyone.

But it’s ok, it doesn’t hurt anyone.

Maybe not but I guess delaying ranking updates for too long is not ideal for the individuals or the system as a whole. I can only imagine the trauma for the loser of the stuck game who had progressed in the meantime to find themselves freshly beaten by someone now much weaker…
Unlikely I know but…

Beaten by someone weaker, and then somehow their rating still goes up after the loss

Summary Currently, it is quite easy to overlook a correspondence game that has entered the scoring (stone removal) phase, where you are...

Two separate suggestions/feature requests, which I think would be helpful for correspondence games: Do not auto-advance (for people using that feature) to the next game, if a conditional move is triggered, or when you make the second pass initiating the scoring phase. Add games where you need to confirm the stone life/death status to the rotation of games where it is your turn (as cycled by clicking on the number in the top-right). Also, it would be nice to get an email notification when it be…