This is probably super lame, please bear with me

I recently discovered identicons, and I gotta say… I’m pretty chuffed! ^ _ ^
I’ve obviously seen forms of identicons before, such as the default avatars for OGS main site and GitHub, but they never really stood out enough for me to realise they were an actual thing.

I’ve never had a universal online avatar before… but I’ve quickly adopted this one at all my regular (and also some irregular) haunts.

My particular one is quite simple, but somehow it REALLY resonates with me… I don’t know what else to say about them, I just really found it neat and so wanted to share

Here is the particular generator I used, linked of course to my own name, but you can enter in anything (it’s also case sensitive) 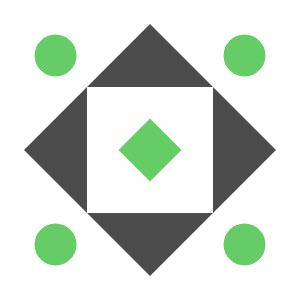 This is what mine looks like, feel free to share your own, especially if it comes from a different generator

4 Likes
Just wondering how the profile pictures are given
Games we made
Story Behind Your Username and/or Profile Pic?
Lord_o_o_Spoon September 16, 2019, 5:05pm #2

I thought this was acually pretty cool. so i ended up making a few of them for the different names and usernames that i have for a few of the different places i go. The one i like best is the one of the right, that has the four dots in the centre. This is quite interesting though, that you can have a universal image of your name that can be used anywhere. I think its really rather cool.

Thoguh I will say i wont be changing my profile pic to any of them for he forseeable future, i like my hilarious anime/ Manga picturs.

please bear with me

I just wanted to know that, even though I follow a different path, I can relate. I’ve been using this avatar everywhere I possibly could for longer than I remember and I fully intend to bequeath it to my entire lineage.

One annoying issue in adopting a consistent avatar across many platforms is that some (like the main OGS site) use square avatars, while others (like this Discourse forum) crop avatars to be circular.

Some of these square Jdenticons are less affected by the cropping than others. Note that even @BHydden’s Jdenticon is slightly cropped on this forum.

I am indeed that man. Though my pic right now is also from OPM. Perhaps i can still bring hope

i wont be changing my profile pic to any of them for he forseeable future, i like my hilarious anime/ Manga picturs.

Totally fair! The main thing that drew me to them was that normal pictures never really resonated that strongly with me… I’d have a picture for one community but it wouldn’t make sense in others…

even though I follow a different path, I can relate

some use square avatars, while others crop avatars to be circular.

Indeed. If I were to do it all again, I’d find a generator that makes circle ones, since it’s trivial to put a circle inside a square.

Alas, I find myself totally smitten with this one, such that I don’t even mind the cute little cropping on the outer circles

Perhaps i can still bring hope

Obi-Wan Kenobi is our only hope

I use different pics for different places too. Even social media. But im also super lazy in changing some pics, and other pics i like to keep changing because its funny… like the pic for OGS, i enjoy the funny anime faces.

What i like to do is make the OGS profile pics in to anime faces and such, like the ones i have now, as if its a responce to a really good move my opponant played, and they look at the profile pic, and that will be my reaction. 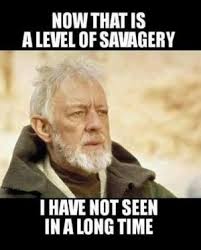 Intriguingly the patterns change if you use uppercase or lowercase for the same word. So now I’m left with a dilemma of which pattern I like the most.

Intriguingly the patterns change if you use uppercase or lowercase for the same word.

I just found this EXTENSIVE list of alternative identicon sources of varying shapes and patterns!

I think the real benefit (and main intended use) of identicons is if they are installed as the default avatar generator across a platform. Hence, they serve to generate distinctive, default avatars (that are generic and abstract enough to not offend) for people that have not set a custom avatar.

I’m not really a big fan of the the Discourse “letter avatar” (or something very similar).
It seems that they switched from Gravatar to the letters a while back: 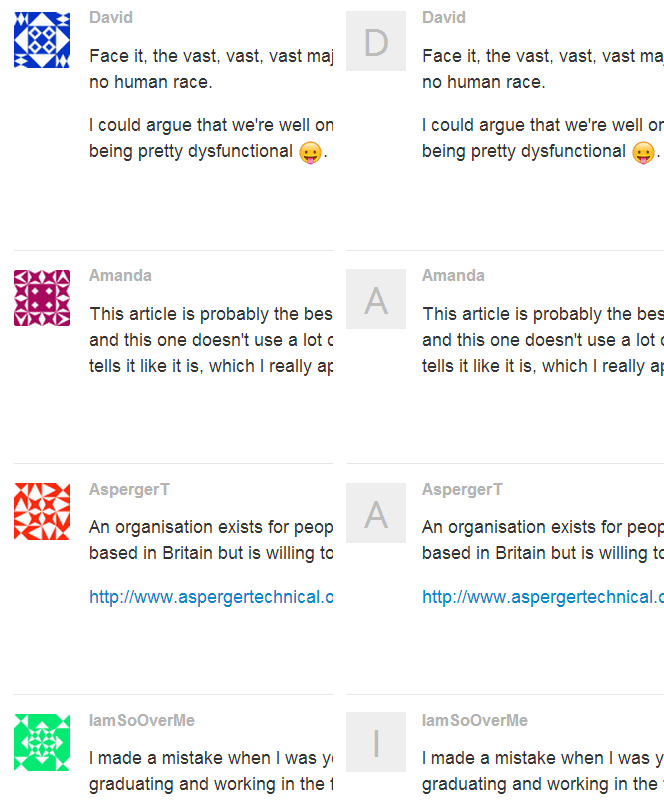 Switch from Gravatar to HTML/CSS letters for no-avatar users

Gravatars for users with no avatar specified use Identicons based on their IP address (or email), which can be kind of noisy – and it also means one image lookup per user. What if we switched to a simpler approach where the first letter of the...

I just deployed the implementation of It is a rather massive change to the way Discourse deals with avatars. We no longer include direct links to gravatar, so for example, this is no longer a concern on Discourse. ...

Another identicon generator (not mentioned in the list above, maybe since it does not seem to be open source):
https://vanillicon.com/

This makes me wonder about the idea of creating an identicon maker that uses heraldry as its base.

So, the colours are red, blue, green, purple, and black; and the metals are white / silver and yellow / gold. Metals cannot touch metals and colours cannot touch colours. The “flags” could be divided in many ways: vertical stripes, horizontal stripes, diagonal stripes, crosses, saltires etc. – and if you begin to run out, why not add some devices?

Almost 2 years since the last bump… Better fix that

Hence, they serve to generate distinctive, default avatars (that are generic and abstract enough to not offend)

Vertically symmetrical designs - seriously, what were they thinking

The opportunities for offense are infinite, and there might be some sort of Gödel theorem about the ability of a system to conclusively avoid offence

Haha I never saw this post before. @BHydden your identicon is quite iconic!

(Or should I say identiconic…)

I especially like the simple elegance of mine, although I tend to really like almost all the Jdenticons generated by this particular software

Even after all these years, I’m still pretty chuffed about it haha