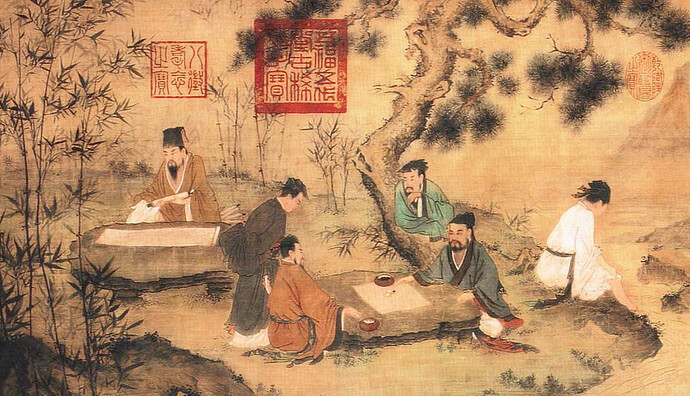 Back to life, old friend! 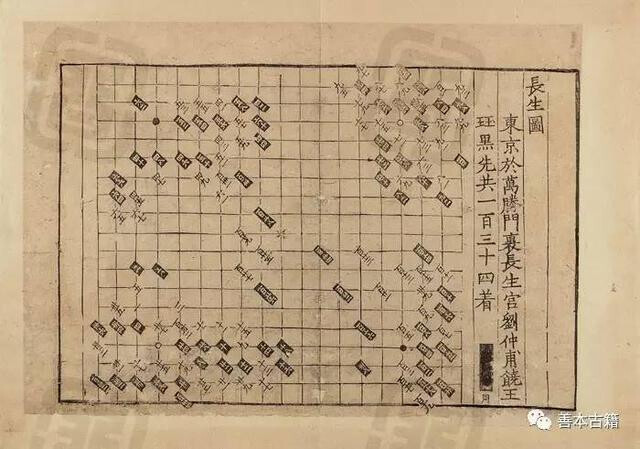 Crossposted from the post by @claire_yang at Visualize go this way, instantly make it 30 times easier to count - #41 by claire_yang

Perhaps she would provide some information about the image?

Crossposted from the post by @claire_yang at Visualize go this way, instantly make it 30 times easier to count - #41 by claire_yang

Perhaps she would provide some information about the image?

It’s from the earliest known printed Go book called - 忘憂清樂集 (sort of translated to a collection that can make you carefree and happy, a sentence from a poem. It doesn’t just contain game records, but also theories and examples like modern tsumego problems). This particular image is taken from the original in-print version from the 12th century AD Song Dynasty (the book itself is currently in the Chinese National Library, but was on exhibit many times)

It is a game played by 劉仲甫(Liu Zhongfu) as white and 王珏 (Wang Jue) as black at the capital of the Northern Song Dynasty around 11th century AD. Liu was 棋待诏 at the time. 棋待诏 is an official title whose job was to teach and as a companion to play Go with the Emperor, only for the best player of the whole empire (like the Meijin of Edo period Japan), got salaries and everything. All the good players would challenge him to get the title themselves, 王珏 was one of them.

And the game rules were a lot different than we have today, like group tax, crossed fixed starting stones placements, and white played first. Due to group tax, these old games would look strange to us, since it would be pretty bad to get cut off, with lots of early fighting and large moyo. It would usually be better to sacrifice a few stones to gain some big influence. And Liu was far better than Wang in this game I feel, almost like a teaching game, purposely gave his opponent many chances to live.

BTW, there is a theory that in ancient times in order to offset the first move advantage, there was some kind of weird komi system in place to penalized white, somewhat around 8 komi. The first mover gave a token captive to the opponent worth 3 units, and can earn one unit with 3 captives. So players would also be pretty aggressive in atari and capture.

Interesting to see how they taught beginners back then. 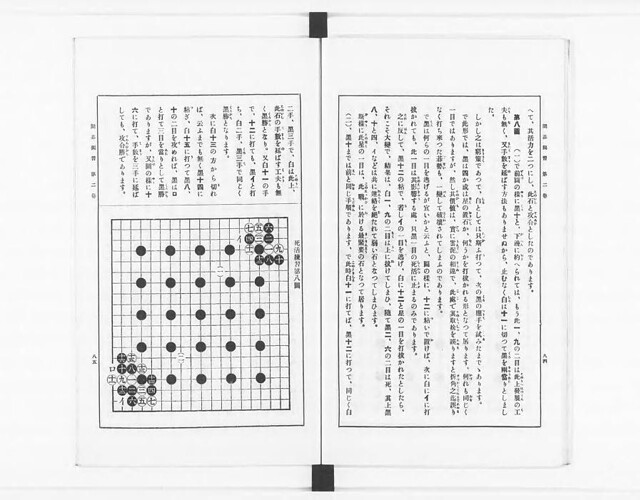 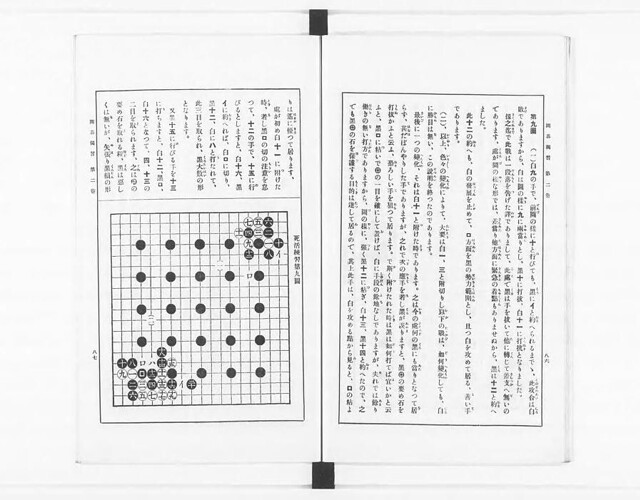 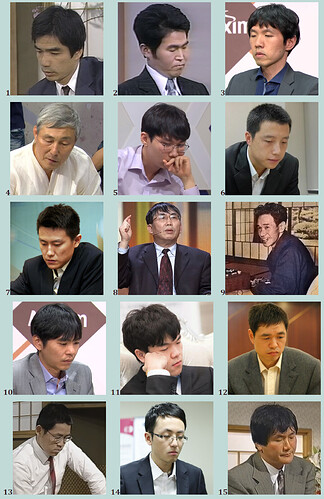 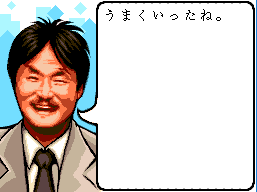 What is Cho Chikun telling us? 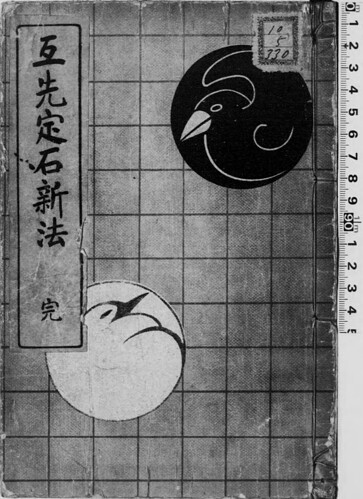 It can be read free and legally online here, on the website of the Japanese Diet Library. 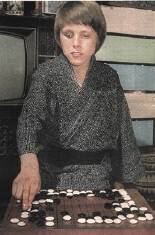 He’s a couple of years younger than Redmond and could, like Michael, have become a professional if he so chose, having placed first in his insei class. However, he declined a career in Go to become a doctor of medicine, nevertheless reaching 7d and becoming, arguably, the strongest Western amateur of last century never to go pro.

In the 13th edition of the World Amateur Go Championship, in 1991, he tied for third place, only finishing third due to tiebreaking. At least as of 2010, this was the best result ever of a Western player in the WAGC.

I’m not entirely sure, but that I think that if he had become a professional around 1990 then he would have been the fourth Westerner to have done so, after Manfred Wimmer ('78), James Kerwin (later in '78), and Redmond ('81?). In reality, it seems that the fourth Western professional ended up being Hans Pietsch in '97. 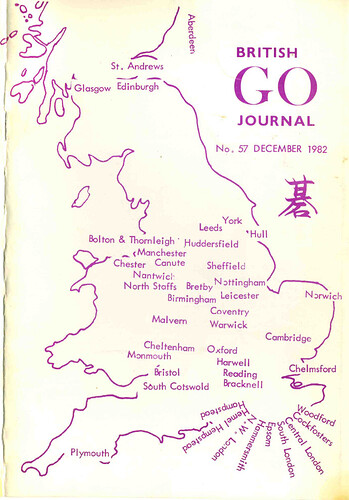 Accompanied by this small note:

To the several clubs not featured on the cover map. Most of these are school clubs with long names that wouldn’t fit. For the same reason Wanstead & East London club is labelled with its former title ‘Woodford’. 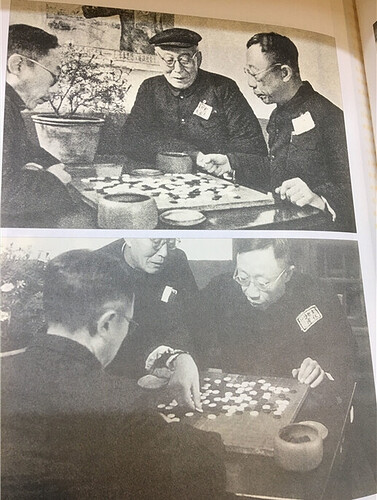 Photos of the last Chinese Emperor Pu Yi 溥儀 – also known as by his courtesy name Yaozhi 曜之 and as the Xuantong 宣統, Datong 大同, and Kangde 康德 Emperor in his various sequential capacities, and by his adopted English name Henry – playing Go.

Courtesy of this L19 post by tchan001, curator of one of the finest collections of Go images on the Internet.

I think Pu Yi is shown on the left. 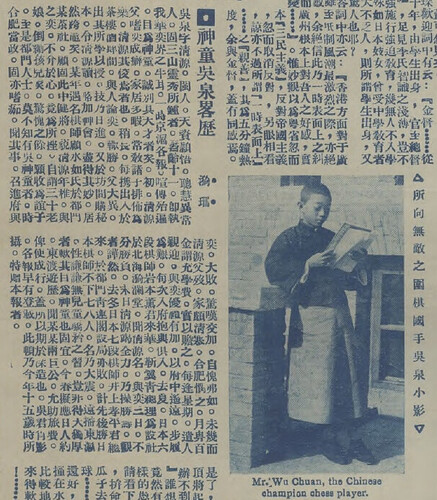 Go Seigen in a Chinese newspaper, again with thanks to tchan001 and this post on L19.

The original publication was from the year 1928 from the No. 174th issue 第174期 of the Beiyang Huabao 北洋画报 (“The Pei-Yang Pictorial News”). 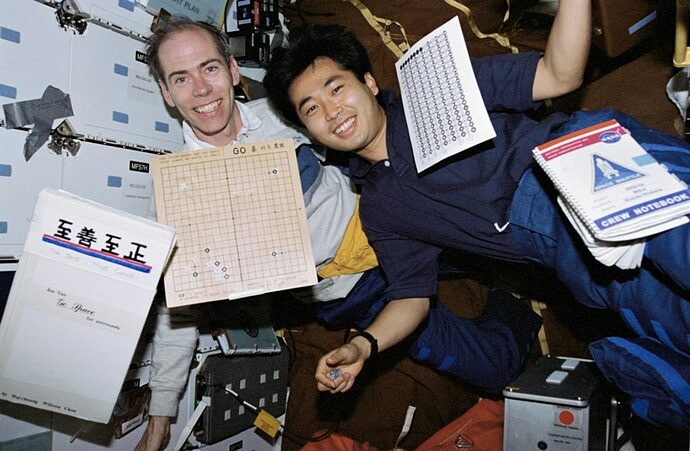 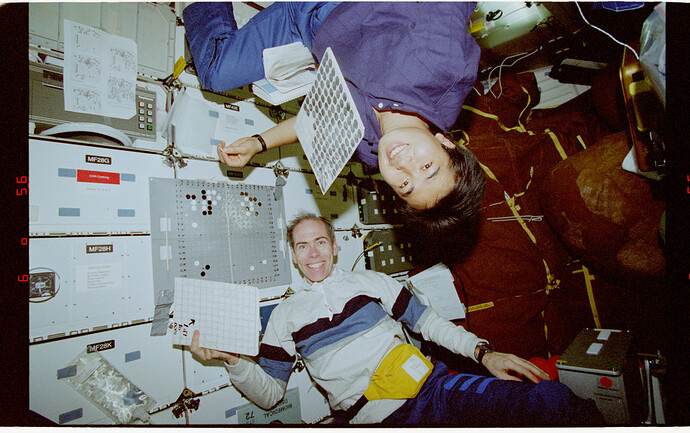 On the 18th of January, while most of the country slept, a small bit of history was made. High above the Earth, an unusual pair of go games was played by Dan Barry and Koichi Wakata, astronauts and go enthusiasts on board the space shuttle Endeavour. They replayed a famous go game and then played a game of their own, each on boards specially designed for weightlessness.

”GO to space, a journey of 4,000 years” and ”Be Good and Be Right” were the slogans inscribed respectively in English and Chinese on the two go boards and carried on board the Space Shuttle Endeavour. This flight of the Endeavour circulated the earth from January 11, 1996 through January 20, 1996. On these boards, Barry and Wakata, two of the six Endeavour’s astronauts, made history by playing the first board game ever in space. These activities were also the climax of the space go contests that were sponsored by the American Go Association (AGA), funded by the American Go Foundation (AGF), and organized by the Houston Go Club (HGC). 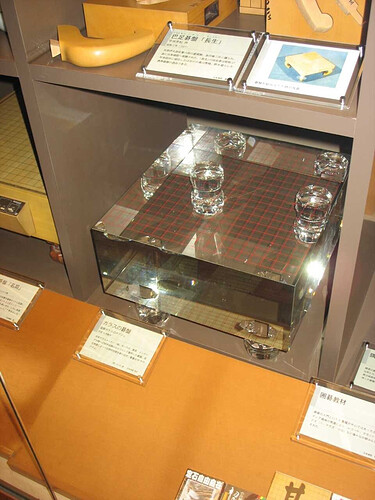 My roommate and I were thinking; what kind of stones would you want to play on this? They’d have to be of an appropriate hardness to not scratch the glass. We were thinking of beach-washed agate / chacedony, maybe an Oregon mossy agate, with perhaps a dark jade or soapstone ‘black’ stone.

It seems that he went to a Go museum in Japan in or before 2012 and took some photos. 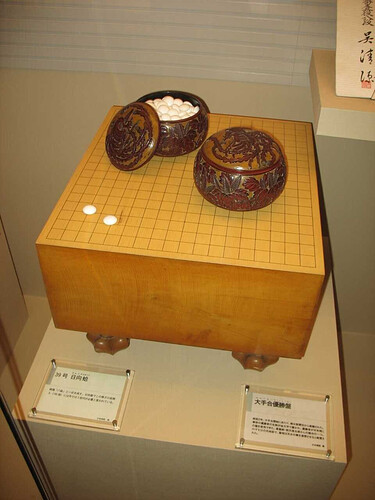 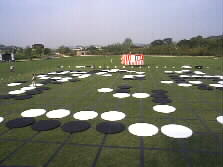 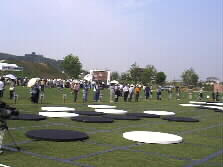 Giant styrofoam Go stones from a 1999 match held in Oita between Hosaka Mayu 2p and a local 5d, who was the prefecture’s WAGC representative (the event taking place in Oita that year). 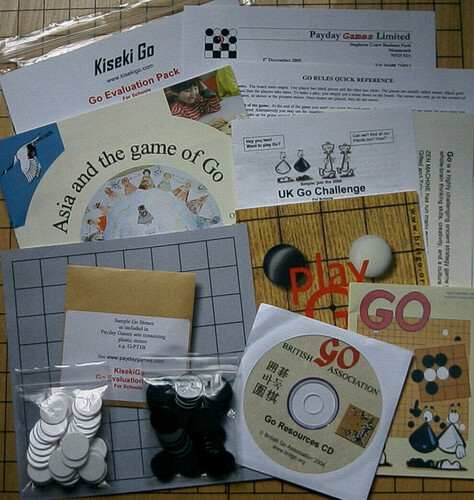 KisekiGo’s (ie. Tony Atkins’) Go Evaluation Pack, which is apparently still on sale in the UK for £5.

Asia and the game of Go - workbook on culture and capture Go
Go: An Introduction - leaflet containing rules in cartoon format
Go Rules Quick Reference - a one page summary of the rules (as used in UK Go Challenge games)
Play Go - the British Go Association leaflet on history and culture of Go and how to play
Cardboard 9x9 board
Set of 40 white and 40 black introductory Go ‘stones’
Advice on buying equipment
Sample plastic Go stones as available from some suppliers
Entry form for the UK Go Challenge

The BGA Go Resources CD rom (as in illustration) is no longer available.

The Play Go leaflet is still being distributed today. You can see it in this photo from the Imperial War Museum’s Atomic Bomb Game event, which I think was in 2007. 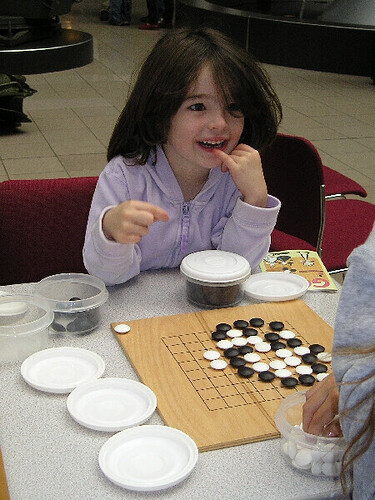 This complete set of white and green jade stones at the Imperial Palace Museum in Beijing may very well be the most beautiful thing I’ve ever seen. 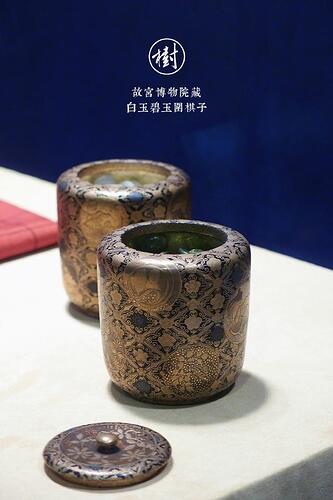 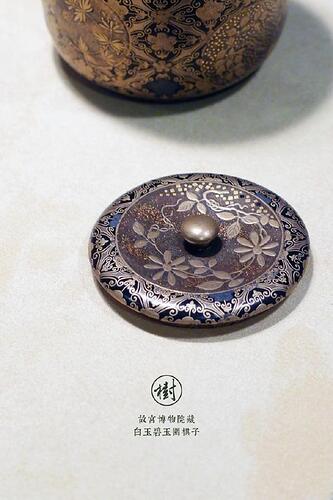 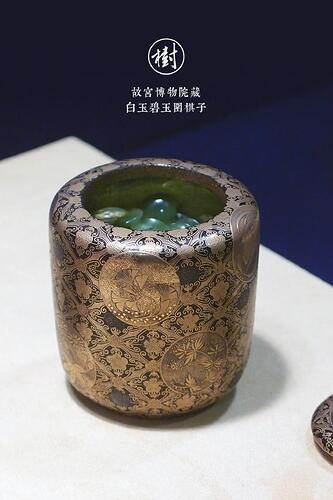 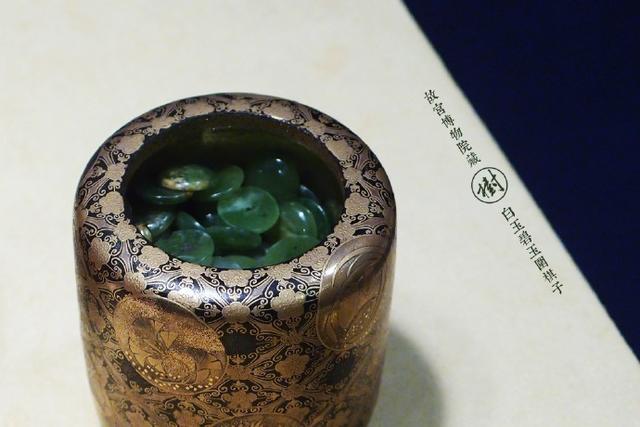 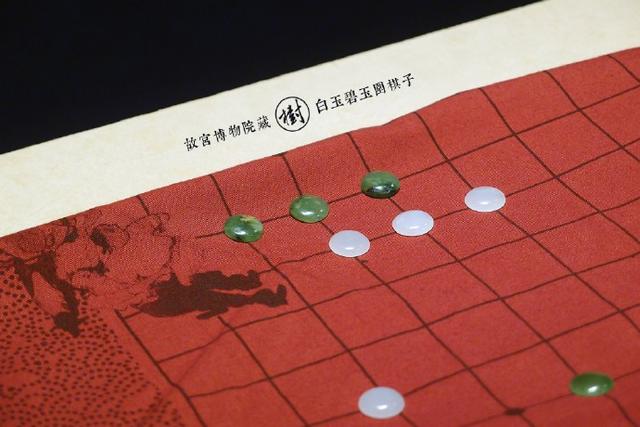 In Soviet Russia Go board is MetaL 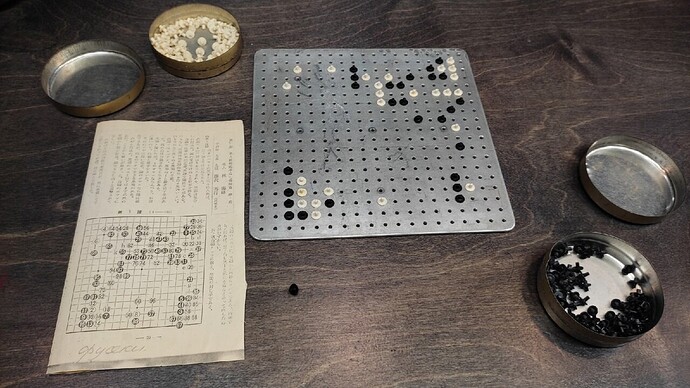 Looks like a homemade travel set.
Cutting and drilling aluminum is easy. But where do peg stones come from?