3-5 years at the very youngest, I think. Go can be made fun at almost any age, by adapting the form to suit the child’s capacity.

For example: My nephew is 3 and he loves to play “checkers” with me on a jumbo mat like the ones they have at Cracker Barrel. Our games consist of taking turns placing our pieces anywhere on the board, then once all the pieces are on the board we begin to stack them one by one. Once the stack is complete he knocks it down and we separate the pieces to start all over again.

There is almost zero strategy involved, but you should see how thoughtfully he considers each placement, and how excited he gets when it’s time to demolish the tower of checkers.

I suspect by 5 we will be transitioned into a 9x9 game of Go, perhaps with simplified rules for counting.

Simplified rules for counting: count only live stones, play until no one has any legal moves left (or would risk capture). Komi depends.

Maybe you do this already, but when playing with your nephew remember to include plenty of mock outrage at seeing the tower destroyed. I think toddlers enjoy that almost as much as the actual knocking down.

Oh yeah. There is always a cheesy Darth Vader “Nooooooo!” when he sends them flying

So this popped up on my feed today…

Having said that, I have come up with a fast-game variant that I use to introduce new players. The idea came to from playing against GnuGo when was 20-24kyu - time and time again, I’d already lost the game by move 50 because I didn’t know how to play a balanced opening

So, in my quick game variant, each player ONLY GETS 25 STONES.

This forces you to think in terms of playing a balanced game rather than duking it out for a single corner, and it introduces the basic concepts to folks quickly, so that they can start to grasp the idea of whole-board play. Plus, it only take about 5 minutes per game.

It’s a handy tool to have around because playing a whole 19x19 game is often too intimidating to beginners.

How do you determine the winner?

This sounds fascinating! I’d love to play you some time to see what it’s like. : >

Vsotvep - it’s mostly for demonstration, so the “winner” would be agreed by mutual discussion. Just looking at the board around move 50, it’s often easy to see that one person is ahead while the other would have an uphill struggle.

Honestly, this is one of those things that only works in situations where there is a BIG gap in skill between the 2 players - like an 8-12 kyu difference. Players who are evenly matched - or who know how to play a balanced opening - wouldn’t really be able to tell who is ahead by the 50th move.

However, in situations where one person is teaching or introducing someone to go, these types of skill differences crop up a lot, so this miniature version is useful in describing the broad-brush strokes of the game without getting mired down in the nitty gritty of joseki, capture, contact fighting, and all the other skills one would need to learn to become a well-rounded player.

sure! as long as we played an un-ranked game and we both agreed to stop and resign after move 50

let’s set it up!
cheers
tonybe

if so, I will send you an unraked correspondence game challenge, and we can figure out a time to try it out

Cool, I’ll send you a game challenge, and we can work out a time to play.

I am most available 9am-5pm Pacific time. How about you?

should we post the results of our experiment so people can see what happened? 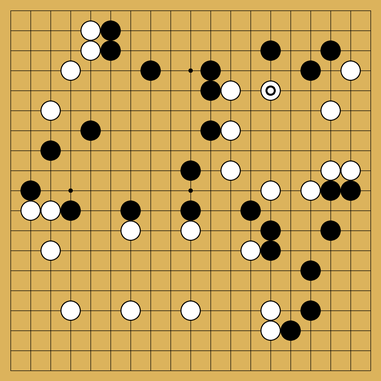 Did you have any luck?

May I just add on this that the context seems important.
If there are a lot of go activities in the family then introducing the game will be pretty easier. Or if you child join a go school with children around the same age.

No, but my for my birthday last May, my wife told me she would (finally!) be willing to let me teach her how to play Go! Best present ever!

I started her off on my 19x19 for Beginners series, and she has found it helpful. So far, we’ve been playing games where we only play the first 50 moves, focusing on sente/gote, simple joseki, and corner > sides > middle kind of stuff.

We also have Katrain open so she gets expert assistance (I turn it off for my own moves) - and before she picks, we have a discussion about the top 3 move options, because Katrain often plays much more aggressively than she can relate to. At the end of 50 moves, we take a look at the Win% graph and she’s usually in the lead, so that provides some positive reinforcement as well.

Right now, these sessions feel very much like she’s lost in the woods, and relying on Katrain and me to lead her out, but I can also tell that she’s starting to absorb the fundamentals and beginning to make good decisions on her own. Hopefully, somewhere down the line, these will feel less like teaching, and more like playing.

sounds like a nice bonding opportunity, whether she eventually ‘gets it’ or not