Is it possible to extract old ranks?

I remember som artefacts in the players rest API, but I’m neither sure they were ELO Nor If they are still there.

No, I dumped that data awhile ago.

Was there a reason to dump it? It was just wasted space or?

I remember som artefacts in the players rest API, but I’m neither sure they were ELO Nor If they are still there.

I think there could be old artefacts of ratings logged in the chat in games. I can see games where the new rating system puts me at 9kyu (!) while in the chat it says I was 22kyu. It makes it very odd to look back at my first games, where I’m playing a level consistent with tpk I’d say, while the ratings have me jumping back and forth around 15kyu.

I don’t think chat ranks are accurate. They’re close though, so it’s a bit confusing.

Look at old review request of mine.

Game: https://online-go.com/game/6694781 I’m White there. Time control: live, 20min+5x1min. I already did my own review, if it’s of any use. Somehow in this game I created a lot of weak groups and had 8 groups in total. So I wonder how I could’ve avoided splitting up so much. Also I’d like to hear some thoughts on how to choose josekis better.

7k vs 8k claimed but in chat I’m listed as 5k in messages. But when we look into api we see this: 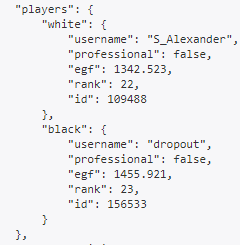 Ok, maybe ranks in chat are overall. And in the games are categorized.

Yeah I couldn’t really tell from the api and OGS site game records. There was a few places that recorded rank in the api (under “players” another with “white_player_rank” adn “black_player_rank” and under “gamedata”), and it seemed like even the variables in the gamedata changed between 2016 and 2017.

That’s interesting anyway that you’re getting an idea of what each piece means.