Names Of A Few Common Moves

Nothing profound, but hopefully useful to somebody? 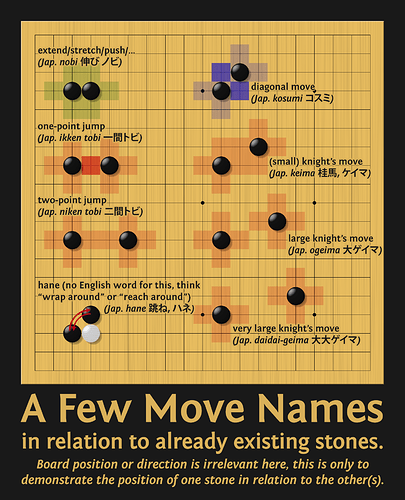 I’m pretty sure the english term for “hane” is “turn”, though that’s also used to refer to the solidly connected one which makes a full triangle.

Oops. I meant “bend”. “Turn” is used exclusively for the solid case, but “bend” is sometimes used for both.

Since this also is sometimes described as “bend around” or “turn around”, I agree with Bill Spight’s comment that it’s easier to use the well-established hane to avoid confusion.

However, these conventions aren’t universal. For example, a Monkey Jump is actually an example of a slide.

There are some terms from here that I’ve rarely or never heard used but are useful nevertheless, and could be worthwhile to know:

Bo-tsugi / pole connection: Connection of a one-space jump into a solid three-in-a-row
Fukurami / bulge: Making a tiger’s mouth over the opponent’s stones
Guzumi: A bad shape that is good in context
Hanedashi: A hane that invites a crosscut
Kikasare: Seems to mean a passive response
Maido: Seems to means a shape where a single third line stone is atari’d towards the edge from above
Souba: An even and reasonable sequence

Fukurami / bulge: Making a tiger’s mouth over the opponent’s stones

Is there a word for the kind of word which means something simple, but no-one knows it does, so if it is ever used the reader will definitely have to look it up?

That would imply intentional obscurity, though. The hermeneutic style is a style of Latin in the later Roman and early Medieval periods characterised by the extensive use of unusual and arcane words, especially derived from Greek. The style is first found in the work of Apuleius in the second century, and then in several late Roman writers. In the early medieval period, some leading Continental scholars were exponents, including Johannes Scotus Eriugena and Odo of Cluny. In England, the seventh-century bishop Aldhelm was the most influentia...

Bugcat… our own resident hermeneutic!

(BTW “aglet” is in that set of words … my friend has an aglet maker! True fact!)

It seems that this word applies to itself (autological).