New here - How do I get a ranking?

I’ve played a few games and lost them all; I’m very new to the game (have read a bit in a book I have, some online, and have played a bunch of games against AI, winning a few 18kyu AI games). I don’t understand how to get a ranking here, nor what the ### ± ### stuff that shows in my profile means. Is there an explanation of this anywhere? Thanks!

Could you please adjust my rank / My rank says “?“

if you prefer reading manuals, our documentation is avilable here: https://github.com/online-go/online-go.com/wiki, but it is a long read, and you will probably discover most things on your own, or sometimes it is more convinient to just ask here, so feel free

To get a ranking you just play games until the system is sure enough it can assess your strength. In your case it should not take longer than one or two more games I think.

The first of the two numbers is your estimated strength represented in “Glicko points”, which are arbitrary numbers based on the Glicko II formula (https://en.wikipedia.org/wiki/Glicko_rating_system). The more you have the stronger you are. These are then converted to the traditional kyu/dan, which are easier for us humans to understand, but not so convenient for math purposses.

The ± symbol you can think of as “give or take” and the second number is what we call a deviation. The bigger the number the less sure the system is about the first number representing your strength. By example your current rating is 599 ± 191 which means the system thinks you are 599 Glicko points strong (which is close to a completely new player), but you might also be 199 points stronger or weaker. That would still make a big difference, therefore your rank is still displayed as ? because the system is not very sure.

Sorry for the long novel, hope it makes sense

Thank you! Makes sense to me.

The system should let you play ranked games.
With automatic pairing or with custom settings.

It will assign you a provisional rank and recalculate it after each ranked game. When it estimate that your rank is precise enough the ‘?’ Will disappear.

Note that if you are a beginner you will have some difficult time in front of you, and ofc if you are a strong player at reverse some easy time.

If you want more info you can read the FAQ.

I know it should, but it doesn’t, and I have read the FAQ, which is no help.

I guess this this the same problem as in another thread:

We tried to create a custom game and restrict rank, but unfortunately we could not ask for opponents lower than 15 kyu, even after having lost a couple of games.

I think the answer is to use auto match, lose a few times and then your rank should settle somewhere more useful.

As advised play automatic matches or if you want custom (if you prefer another time setting for ex. ) leave automatic handicap and don’t restrict ranks to get most chances to be paired.

Well we don’t know your level, in fact you won your first game.

Please tell us if you get ranked games now and welcome to the forum!

Well we don’t know your level

Quite right, sorry. You could of course challenge up to 4d I guess going the other way.

New accounts are actually 12k, meaning they can challenge anyone from 21k to 3k

Maybe that’s how it’s supposed to be but since the latest ranking update that’s not good it actually works in practice is it? There have been various discussions in here about new accounts showing as 6k and matching (or humble rank) not working as expected for them.

This must be a chat display bug, if you go to their profile page they display correctly as (a humble) 11.9k it’s worth noting that the ratings for new accounts and humble rating were never changed, only the ranks to which they map to…

hmm, yes AFAIK this shouldn’t be possible. While they are ‘technically’ 6k, they should be treated as 12k by the server, and thus should not be able to accept 6k+ game restrictions…

Or has this definitely been fixed now?

Seems like a few exceptions rather than necessarily the system itself being broken, otherwise we’d see it a lot more often. I can’t say for sure how these errors are creeping in, but I’m pretty sure they’ve not been addressed yet.

How often do you expect to see it? It’s expect most new accounts suffering from this just work it through or quit without it ever being raised. And it has come up a few times “recently” so it makes it feel like a bit more than a “few exceptions” to me.

The last time I tested this was a while ago but after the rankings were adjusted to better match AGA/EGF. At that time brand new accounts [?] were treated as 6k! and could therefor play ranked versus no weaker than 15k.

This attempt (just now) by Kosh-Beta-3 to create a ranked custom game seems to confirm the status quo: 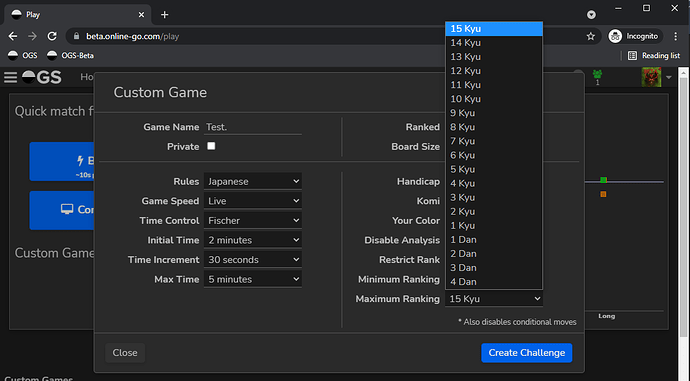 well… I find it hard to believe we’d have so few reports if this was happening for all new accounts… but hard to argue with actual testing… perhaps such a grievous oversight is worth a moment of @anoek 's attention? Seems like if humble rank isn’t working at all it probably worse than it not existing at all, right?