Odd Cases 🤔 in the Japanese Rules

Since many rating systems aren’t about “this game is worth X points”, but use your performance in multiple games at once to estimate your rating, the answer is yes. (Simply because they don’t assign a point value to the game, they cannot average them)

(I accidentally bumped with a stupid question

I really should have known this, huh?

In another post, I linked to and briefly discuss a study of a the history of the rules. There’s speculation that the peculiar “eyes in seki don’t count” aspect of Japanese rules may be a historical remnant of the group tax effect from the stone scoring rules.

There is a fascinating side-effect of this version of the “written Seki rule” (which I think, nobody actually applies in practice, even professionals). I’ve seen it called “pseudo-seki”, so it is the name I use for the lack of a better name. I found it on the internet here: https://lifein19x19.com/viewtopic.php?f=45&t=3666&start=60.

The position is the following: 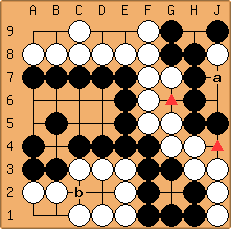 The black group in the upper right corner is involved in the possiblity of step ko: When completely surrounded, White could capture the corner stone, then if black cannot retake the ko, white can add the J7 stone to start a direct ko for the life of the black group. In the game however, white has one and only one ko threat at A5, and black also has one and only one ko threat at b (which is large enough: this will change later!), and thus white has no hope of winning the step ko during the game (since in the resulting direct ko, black will take first).

Furthermore, the black group is deemed alive by endgame hypothetical-play, with no need to add an extra defense move (capturing the white stone). This is because the existing ko is a step ko, so in hypothetical analysis, there are no ko threats, so white will take first, black will pass for the right to take the ko, white can only make the J7 move and then when black takes the ko, white can do nothing, so black wins the hypothetical play.

This is crucial because the game is very close: if black makes an additional defensive move like capturing the white stone so that there is no ko and his group is clearly alive, he loses by 0.5 points.

So, it looks like black should win by 0.5 points. However, white will argue that the top groups touch dame, and so are in seki! If they are counted as seki, white only loses 4 points of territory, but black losses 5 points (4 territory + the stone inside), and thus, white wins. So, to avoid this, black’s only hope is to fill dame, playing both triangle-marked intersections.

Note that, if white fills those, our analysis so far has been correct, the groups would not be in seki anymore, and black rightfully wins by 0.5 according to Japanese rules.

However, when black fills those dames, the situation changes, because filling them has made the black group larger. This means that, if white captures it, he will gain more points than before (2 more territories + 2 more prisoners). This makes black’s ko threat at b) no longer large enough: that means that if black fills the triangle-marked dames, then he loses because white will now start the ko, and will not answer black threat at b), effectively exchanging both corners, but now the difference is winning.

Thus, the seki rule makes this possition winning for white, if followed as written.

To the best of my knowledge, such a situation has never been actually claimed in a real professional game. My understanding is that in a real game, even professionals would deem the black group to be alive and not claim a seki instead, considering the written rule just “flawed”. Unfortunately I have no evidence for this, other than the lack of a counterexample (that would be: an actual pro game where a pseudoseki situation occurred and in which white won by claiming seki).

My understanding is that in a real game, even professionals would deem the black group to be alive and not claim a seki instead, considering the written rule just “flawed”.

I’m convinced that Go Seigen would be the kind of pro player that claims seki. The whole argument reminds me of his rule disputes.

Interestingly, (without having explicitly checked) I think KataGo’s computer-suitable formalization of Japanese-like rules actually does agree with your guess of what pros would think, rather than the literal interpretation of the written rules. White can neither win the ko during normal play nor during post-game cleanup, and during cleanup black can safely fill the dame and capture the white stone without cost, so will win by 0.5.

Wow!! Thanks for sharing that “KataGo” rules formalization, I had not seen them before. Indeed, the two-phase idea is genius, the amount of “theoretical match” with actual Japanese rules is incredible for such a well-defined ruleset that solves disputes based on actual board play (and not some “hypothetical best play as defined by competent authority / exhaustive analysis”).

All territory-style rules based on actual play that I had seen before “suffer” from such non-Japanese features mentioned, such as one-sided dame or “fight for the point of territory within the last ko” (which is called a “pass fight” in the KataGo page, and is directly linked to the Go Seigen disputes, as that point of territory is awarded by Chinese rules).

Indeed, in KataGo formalization the situation would not end as seki, as black fills dame as soon as the first phase starts and the ko rules turn into “local mode”, since by then filling the dames becomes completely safe and ko-threats irrelevant.

This is quite amusing because the concept of “enabling a new permanent stone in the locality of the group”, which is a key new feature of the Japanese 1989 rules that is necessary to explain various rulings (snapback, a common corner seki not being instead an alive-group-with-prisoners, some positions where playing a new stone exactly on top of the single live-stone is no possible, but it is possible to do so “near” that), is a concept that is not present at all in KataGo formalization, yet the theoretical best play result is identical for these positions.

Hehe, thanks, that was basically the goal when designing them :).

“Find rules that won’t break even with completely stupid automated self-play that still reproduce the spirit of Japanese rules.” It took a while, a few months of on and off just having it in the back of my mind, and iterating on it over time.

As I played with it, it started to make sense a little what the Japanese pros were/are going for. You blindly feel enough different parts of the elephant that it starts to come together as a semi-coherent picture, and if you get it right at least all the common cases magically all fall out the right way, even if the rules beasts don’t. I find it amusing that you also get three-points-without-capturing too (and it naturally falls out of lots of other territory-rules-via-cleanup-phase formalizations too), suggesting that the traditional Japanese pros very much “knew what they were doing” when they made that ruling, and that the J89 rejection of it is in some sense a “mistake” resulting only from not being able to figure out the right way to word the rules to justify that ruling.

Of course, KataGo’s version of the rules also has a few known bugs so it’s definitely not perfect. Some of which were discovered when hammering out the fine points in the L19 forums. But they should be rare enough that I’m okay for now to just live with it. Even superhuman bots still blunder in much larger ways in vastly more than the <0.1% of games that will have such an anomaly.

Resulting trained nets seem to work okay for Japanese rules games on KGS. Eager to see if over time more engine GUIs and sites like OGS will eventually have APIs for varying the rules, as inbae mentioned in this other thread (Rules support for bots)

Of course, KataGo’s version of the rules also has a few known bugs so it’s definitely not perfect. Some of which were discovered when hammering out the fine points in the L19 forums. But they should be rare enough that I’m okay for now to just live with it. Even superhuman bots still blunder in much larger ways in vastly more than the <0.1% of games that will have such an anomaly.

Do you have any link to such discussion? I would love to see examples where KataGo rules with perfect play differ from japanese judgement (other than torazu sanmoku, which up to 1989 was actually judged by Japanese in the same natural way that KataGo does).

I believe @hexahedron was referring to this discussion on the LifeIn19x19 forums:

The “non-Japanese-result” positions that I was able to extract from that discussion were only:

So far, the mismatch seems to be remarkably small!

You may also be interested in positions A,B,C here:

However I have looked at position A and I think that Japanese rules would consider that white does not need to add an extra move there. This is because all white groups should be alive, the corner group in particular because in hypothetical play it enables placing new permanent stones (at F19, G19).

This is the very same justification of why the two black corner stones in https://senseis.xmp.net/?SekiInAreaAndTerritoryScoring are considered alive and not dead, and why this is seki and not “white lives with prisoners and territory” under japanese rules: White can capture those two stones, but capturing them enables the placing of new stones “in the locality”.

This also matches the Jasiek 2003 formalization, as far as I have been able to analyze, because the new permanent stones are within the group’s local-2.

So position A would be a difference because if my understanding is correct, KataGo rules imply that you must add an extra move to defend or you lose the corner group.

I have not looked at the other positions yet but they all seem very interesting.

I have seen all three positions. My understanding is that in all three cases, actual Japanese rules in use say that no extra defense is necessary (because new stones in the locality are enabled by the capture, which deems the corner group alive).

So it would seem to me that only A and B generate a slight 1-point difference, and C is a “non-difference”.

Have you tried applying versions of the Japanese rules to 19x1 boards?

That’s an entirely different game. Except for sizes small enough that MCTS can brute-force the entire game, you’re not going to be able to say anything sane about that board, because it’s going to be entirely alien to the neural net. You’ll need to run the whole AlphaZero process to do specific training for boards that size.

I just meant the japanese ruleset(s) old, modern etc, (nothing to do with ai?). I saw people trying to debate that everything on a 19x1 board was seki and not territory