Do we know if the app is letting these through also? I couldn’t quite tell from the report. It looks like Malkovitch comments.

I can’t remember if it’s been said yet or not, but it’s not ALL malkovich messages that are being let through, only certain games for some reason… I too use this app and I have checked active games of known heavy malk users and none of them are erroneously coming through for me

I tried the app, but not being able to set time settings for custom games is a non-started for me.

Maybe start your games on the desktop, then use the app to play?

Hi @MrAlex just tagging you here to see if you think the new developments of rengo on OGS might also work in the app.
It started here:

And is happening here:

Things that definitely have to be fixed before deployment to the main site: Performance problem done (I’m sending too much irrelevant stuff each turn, will bog down main server if it gets used a lot) Chat keeps disappearing done Take players to game page when a live game starts done Review page updating like game page does done Player cards updated when you step back through the game done Layout of Profile page got broken fix submitted Error page after both sides pass fixed Things …

Hi guys, sorry for the disappearance act, life got in the way

I have a newborn to take care of now

Anyway, I’ve just released a new version, it has a few bugfixes in it, including:

@_Sofiam could you kindly have another go at the new version and let me know if it’s any better for you now?

Try studying this one https://github.com/SabakiHQ/deadstones/blob/master/src/deadstones.rs

Edit: Never mind I thought it was a new topic.

@_Sofiam could you kindly have another go at the new version and let me know if it’s any better for you now?

Yes, I just tried. It tells me “It’s yout turn in 84 games” but the real number is 779. In the games that appear I can play and they disappear from the list after I play, but they are not all of them.
Huge improvement though, if I want to make some moves from the app I can do that, it doesn’t crash

Thanks for continuing to try!

I have a newborn

Yes, I just tried. It tells me “It’s yout turn in 84 games” but the real number is 779. In the games that appear I can play and they disappear from the list after I play, but they are not all of them.

Aaaargh you’ve been busy it seems, you’ve actually hit another limitation of my app that makes everything crash and burn when you have more than 999 active games at the same time. Previously you’ve had like 800, so I wasn’t aware of this… Anyway, I fixed it, it should work in the next version.

Huge improvement though, if I want to make some moves from the app I can do that, it doesn’t crash

That’s actually good news, I think that the next version will actually be usable by you then!

Thanks for continuing to try!

My pleasure, thanks for repeatedly testing it out!

One more for the road!

I can no longer open the app

well that’s incredibly weird. If you’ve deleted the app then you’re just like any other user, until you log in the app can’t possibly know there are 1.5k games incoming. Can you describe when the crash is happening? Immediately after opening the app or is there something going on first?

It happens immediately when i open the app, before seeing anything else. 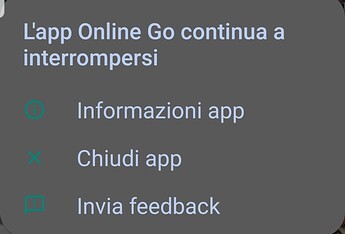 Ok, sorry about that it seems this particular build crashes on all old-ish Android phones. I’ve released a new version that does not have this particular problem, but it should be with you probably tomorrow.

Hmmm… I can’t see any crashes for your user, only throttle requests, which means if there are a lot of games to update it will take a long time to do so (for example the first time you start the app or if you didn’t log in for a while).

It shouldn’t crash though, I suspect the app is running out of memory, as some of the algorithms there are sacrificing memory for the sake of speed. That strategy might not be a good one when you have so many games. I’ll try again some more

Anyway thanks for trying, I’ll give it a few more goes in the future.

Sorry, I am not familiar with the terms and the differences between them.
I have tried again now. It gives me a higher number than the real one (50 more games) and “crashes” on the homepage (I can’t scroll, change page or open a game). The error comes after several minutes, and it’s this: