Did you lodge a bug report on his github? notifications work on my S7

I did along with some others. https://github.com/nathanj/ogsdroid/issues/16

Actually I’m working on that part right now… Notifications are tricky unless the backend does some changes to enable what’s called “push notification”. Basically the only thing I can do is poll (i.e. connect ot the server and check regularily), but I need to figure out how often to do that so that I don’t drain the battery and data pointlessly.

How often do you reckon I should check? Every minute? Every 10 minutes? Every hour? A couple of times a day? Every day?

Thanks for the interest Seferi. I am sadly struggling to find the time to work on it properly, but hopefully I will be able to come up with a beta release before Christmas. Beta testers would definitely be welcome then.

PS: I’m planning to distribute on Google Play and not fuff about with F-Droid.

I’ll add it eventually, but truth is most users won’t bother with it (if they even discover it) so I have to come up with a reasonable default. I mostly play live games so this features is mostly useless to me… that’s why I’m asking. I’m leaning towards checking every 5 minutes while plugged in and backing off to 30 minutes if on battery…

I play correspondence only, it would be nice to have a few options to choose from… Once a day, every 6/3/1 hours etc… Looking forward to your beta release mate. Thanks!

It’s a very early alpha, so many things won’t work (most notably issuing and accepting challenges). Also, the notification keeps coming back in a few hours even if you dismiss it (which is not intended) but all in all you should be able to use it to play correspondance games. Braver souls should be able to play live games too, just don’t abuse the last second too much

Any feedback is welcome, but due to some personal problems I might not be able to work on this very much in the next period.

Thanks mate, just installed, looks great! shall i report the bugs here or per email? Chat function is not yet enabled i guess, clicking the icon doesn’t do anything for me…

I just downloaded it too, quite like the aesthetics so good job on that front. I noticed ranks displayed for all players are wrong but that could possibly be an api issue not a you issue.

Thanks for trying it out. You do need to confirm the move by clicking the check mark on the bottom… did you do that and it didn’t work? What happened though? did it crash or anything?

Thanks for trying it out. Rank is wrong on the game list screen because the API is a bit of a mess in that respect (some calls use the old ratings, some the new). Fixing it would require me to make extra calls for each and every game which is not a good approach in a screen that cand display a lot of games. But they should be right when you go inside a game, are they not?

But they should be right when you go inside a game

I didn’t notice that at first, but yes that is correct.

I am curious about the moves thing… I have played about 10 games end-to-end and they all worked, but I was on a good WiFi…

Tried it again today and it worked… very strange… It’s difficult to tell on which game it’s my turn tho, lets say i have 5 correspondence game going on and on 2 of them it’s my turn. They are not highlighted, i have to go through them all. Is it possible to highlight the games that it’s my turn? Great job tho, I’m loving the UI, very sleek…

You are right, that’s something that I need to work on. A simple temporary fix would be to have the top right button (the one that displays the bubble with the number of games it’s your turn on) to take you to your first game that it’s your turn on (I mean open the actual game).

Another thing that would make sense is that the active games list is sorted and that the games it’s your turn on are always at the top.

A third thing would be to somehow show them differently (e.g. different colors).

What do you think would be the best solution?

Honestly all of them at the same time just like in OGS web. Butif it’s tricky and time consuming to implement then i rather have them highlight (different color) plus have the top right button take me to the next game it’s my turn on…

Nathan doesn’t have the game bubble and games aren’t sorted by time by he did manage to sort by your turn and not your turn and highlight the games that are. Maybe you can get some tips from his code on github? 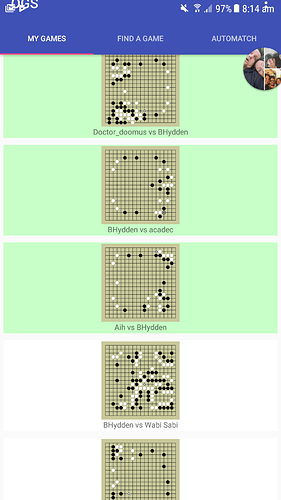 It’s not that I don’t know how to do it, it’s just that:
a. I don’t have the time right now
b. I want to do it in a good looking way and I don’t have the luxury of an app designer as I do on my day job. No offence to nathan, but simply making the background green is not very estetically pleasing IMHO.

PS: I am aware of Nathan’s repo, I have used it for inspiration when I started.