[Poll] Thoughts on an English Title for Go (Weiqi/圍棋)

We look for either using “encircle” or a synonym of it. All those listed above are synonyms from the thesaurus. Their definitions mean the same thing.

Or just use the new english loan word “kivilläympäröintilautapeli” that’s almost as short to type and easy to pronounce as “go”, but a lot more describing!

I’m not sure that using a new common English word to call the game would really help much. I think the main draw back of the name “go” is that it is also a common English word, which creates ambiguity and difficulty when searching for “go” topics online. Picking another English word like “surround” or “encircle” still has the ambiguity issues.

Take “chess” or “backgammon” for example. They don’t need an English name, and they benefit from having a unique word to refer to them. Over time, maybe “baduk” will gain a bit more traction, or maybe we should just call it “igo”.

Either way, nothing will change. A poll on this forum is not going to start some grass-roots movement that causes millions of English speakers to change their habits.

Halo is a bit passe. If we really want to stay recent, I propose that we adopt the name “fortnite”.

Personally I like the arguments given for calling it Baduk. It also feels good to pay homage to one of the three main Asian countries that helped to get it to where it is now as opposed to trying to Americanize it. I understand where you’re coming from as I think Go is a bit of a silly name for several reasons. However, I also don’t think renaming it to “Surround” or something similar is going to help at all. Baduk feels appropriate. Igo and Weiqi would also be fine, but I think a bit… I don’t know. Igo doesn’t feel like it has as much character as Baduk to me and Weiqi would be difficult to pronounce/research as a new player due to the difficulty in Romanizing the Chinese name.

Weiqi would be difficult to pronounce

I may be a bit biased on this (having studied Chinese for some time), but I didn’t know there was a problem with the word “Weiqi”. While most Americans do not pronounce “Qi” quite correctly, they do it well enough (by saying “Chee”) that there’s little confusion between it and other words. So Americans saying “Waychee” without respect for tone is perfectly okay and gets the idea of the name across (although maybe less so to a native Mandarin speaker).

And to be honest, while “Baduk” is ever so slightly pronounced closer to the original Korean (unless they say “Bay-duck” rather than the correct pronunciation of “Bah-duke”), it still has similar problems (Particularly with how Korean consonants work) with getting a native speaker to recognize it.

Just my two cents on the English pronunciation on both words

And to be honest, while “Baduk” is ever so slightly pronounced closer to the original Korean (unless they say “Bay-duck” rather than “Bah-duke”), it still has similar problems (Particularly with how Korean consonants work) with getting a native speaker to recognize it.

Thank you for clarifying this. I always thought that it might have been pronounced “bah-duck”.

Lee Hajin, who ought to know, seems to pronounce it as “pah-dook”. But then I get a lot of wax buildup in my ears, so there’s that to consider too.

No, that makes complete sense, the romanized “b” in korean is more like (I think) a soft “p”

Then again I’m not good at hearing the difference between “p”, “pp”, and “b” in Korean.

Picking another english word that is synonymous to “Surround” most definitely has less ambiguity than “Go”.
Those two words are notequivalent in ambiguity…for this game…at all. Even the words synonymous with “go” which usually comes across as “to go” are FAR more ambiguous for this game.

This is simply an opinion poll using english-latin words that better describe the game.
In a overall translation sense extracted from the original name, Weiqi.

It will not lose “hometown merit” being an english name because look how far it has gotten with a mistranslation i can not emphasize this enough.

Flippant remarks like “nothing will change” arent necessary given that this is simply a poll, that is optional to participate in.

Why does it have to be one word?

I think if ever an English phrase (ie. Not baduk) had a chance of dethroning Go, it’ll be “The Surrounding Game”

Trying to shorten that to just “surrounding” or “surround” just sounds silly to me, as do all the other one word examples in this poll.

I like this. We implied in the original post as sounding it out as a sentence so yes a full phrase also makes complete sense.
The reason were using synonymous eng words of “encircle” is because The original name is 圍棋 and what were looking for is something that describes this… 圍 …specifically.

Why not this 碁? After all, that’s the important part, isn’t it? 囲碁、詰碁、碁盤、碁石、早碁、持碁、連碁、指導碁 and remember, ヒカルの碁? You keep calling it mistranslation, but is it really, I call for language expert 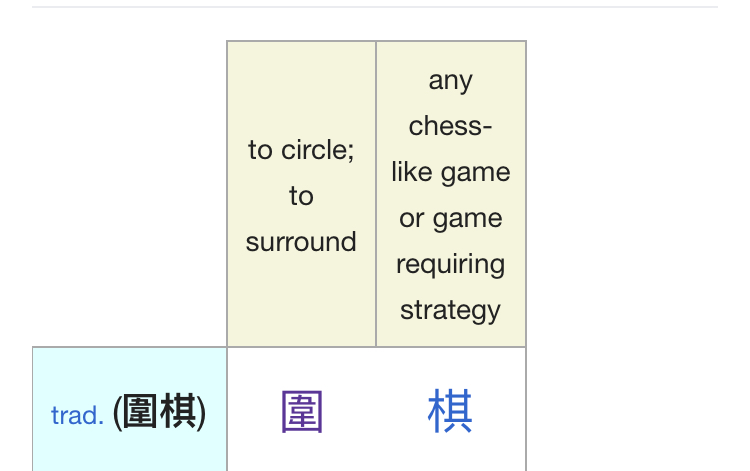 Because of this. But please definite call for an expert if you want to be facetious and say the word “Go” doesnt mistranslate in english.

Sources:
www.forvo.com/languages/ko - search for 바둑
https://youtu.be/dx9NGaICH34?t=62 - of course I don’t speak Korean, but I think he commentator says it a few times here

Also the last time I tried to mention the game to a Chinese guy, he thought I was talking about “foreign enterprises”.