Problem with handicap in tournaments

I created a handicap tournament : Play Go at online-go.com! | OGS

In this tournament, I asked for “auto handicap”.

But, it seems that some of the tournament’s games are without handicao, like this one : Play Go at online-go.com! | OGS ( And, if we look at the “game informations” of this game, we have Handicap
None )

The Chinese rules allow free placement of the handicap stones by Black. I’m guessing Black was confused by this and passed on those extra moves?

Actually the move tree doesn’t support my theory. My only other idea is that the auto-handicap is incompatible with McMahon because of the complicated bars and points system, but I’m just guessing.

In a tournament with handicap=auto I would have expected that all participants would start with the same amount of game points, that is zero points.
In this tournament however half of the players (from Cgi up until P0kem0n, see screenshot) start with negative points. 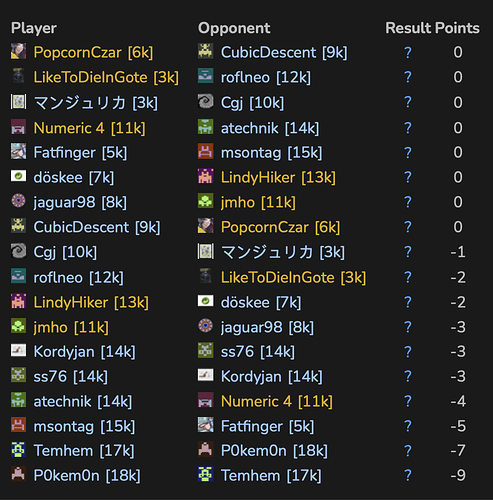 Handicap means to ensure that both players have the same chance of winning their mutual game.And also the same chance of winning the overall tournament.
This is not the case if you assign the weaker players with negative points. No handicap and negative points to start with are for the weaker players a form of (double) discrimination.

So I think that in creating this tournament you chose some incompatible options.

Maybe annul the tournament and start all over again?

Thanks for the answer…

Maybe I will cancel the tournament , and create a new one. I just have to know how to create a correct handicap tournament.

I think we should be able to state rules clearly.
In this tournament there are games which have handicap (18k vs 17k, 1 handicap)

and game which don’t have it despite a big difference in rank, just like the one mentioned in OP or this one (13k vs 7k, no handicap):

If there’s some reason because 1 kyu difference grants handicap but 6k doesn’t, it should be fairly evident to tournament creators.

Otherwise how could we understand if it’s a feature or a bug?

Documentation just says this about handicap:

Rules, Board Size, Handicap
These choices are the same as for a custom game except that board size is restricted to 9x9, 13x13 or 19x19 and for ‘Handicap’, you can only choose ‘None’ or ‘Automatic’.

So, if there are some mutual exclusions between tournament types and handicap, we should put it there.

I didn’t notice that any other game has any handicap. I think there must be a bug.

I also think that McMahon is presumably not compatible with handicap - my understanding is that mcmahon reduces the number of rounds needed to find the strongest player by starting with a ranking of all the players. The bar should be set so that all (and only) those with a realistic chance of winning are above it and start on the same number of points. There can be no handicaps in games between this top group.

The other pairings are between people with a (negative) score linked to their playing strength - the pairings should be between people with similar strengths so again there shouldn’t really be handicaps in these games. However, my experience of IRL tourneys is that there are often not enough closely ranked players below the bar and so handicaps of strength diff minus 1 are used. this means that the stronger player still has a good chance of winning but the games are not completely predictable.

So, in short, I don’t think McMahon is really compatible with handicap - if you want all games to be handicap games.

So in this tourney, I think it’s right that the top group (10k+) is not playing handicap games. However, there are clearly issues, since there is a player in the top group who is 11k (10.2 but was has just won a few games so presumably was weaker before) and then there is only one (as far as I can tell) handicap game between the two weakest players. neither of these things seem right to me.

I do recall seeing something about McMahon tourneys being glitchy though. I wonder if it’s just a tourney format to avoid for now until it’s fixed…
[Although that might be complicated since I think that really you should only set the bars of a mcmahon tourney when the entrants are known but as I understand it they are set when the touney is set up at the moment - I’ve never hosted a tourney on OGS so I don’t know how it works but if the TD can change the bars just before starting the tourney that might work? also I don’t understand what the lower bar (20k in this case) does… I only know mcmahon tourneys to have one bar]

at least 2 bug report that don’t seem to be resolved - Anything on GitHub anyone?

edit 2 - this is an interesting thread - There is no handicap stones - Support - Online Go Forum (online-go.com)
It seems that a combination of pairings and handicap can make things go wrong - i.e if the weaker player gets white then there will not be a handicap for that game since only black can get handicaps so maybe the pairings are done first and then handicaps are applied whereas the desire for handicaps should determine the colour each players gets (i.e. weaker players should always be black)
I don’t know if this is a setting is setting up the tournament.

github issue - closed as resolved Handicap sometimes get set to None in Tournaments with Handicap Auto · Issue #676 · online-go/online-go.com · GitHub

Not really, I am afraid. Tournament systems are not something I understand too well. But there are several problems with the current tournament code that anoek is hoping to fix in the forseeable future, so my guess would be this is also one of the bugs that can come into light with some of the settings combinations just as teapoweredrobot observed…

I hope this will make some light also on how rankings are noted inside games, which is a related feature.

And, last question : could you suggest me a way to costum a handicap tournament in chinese rules with the current OGS’ state ?

I guess the elimination and round robin formats should work. The only thing I’ve not understood is if it’s possible to set it up so that the weaker player is always black - or if that glitch was fixed. If not and if it’s still the case that handicap is determined after (random) colour assignment then there will always be issues it seems.

I’m not really familiar with Swiss but if I’ve understood then it should also work. I’d avoid either of the McMahon formats really as you can’t possibly have these with a single handicap setting that works for all participants and it doesn’t seem that the system is set up to deal with the differing handicap arrangements automatically.

In MacMahon tournaments, the handicap is usually determined by the MM-Point difference. Often, this is reduced by 1 or 2 in order to avoid handicaps altogether (if the field is dense enough).

But not above the bar where there should not be any handicap games.

It seems that Round Robin tournaments are limited to 10 players

Round Robin tournaments are limited to 10 players

Thanks, I will join, but I’m meanly looking for chinese games

I meant it is a round robin with more than 10 players so it is possible.

That’s a special tournament set up by S_Alexander.
I think you can’t have that from standard settings.

I am curious as to how the auto-handicap system works here.

And end up receiving 1 handicap (0.5 komi) against a player with this stats 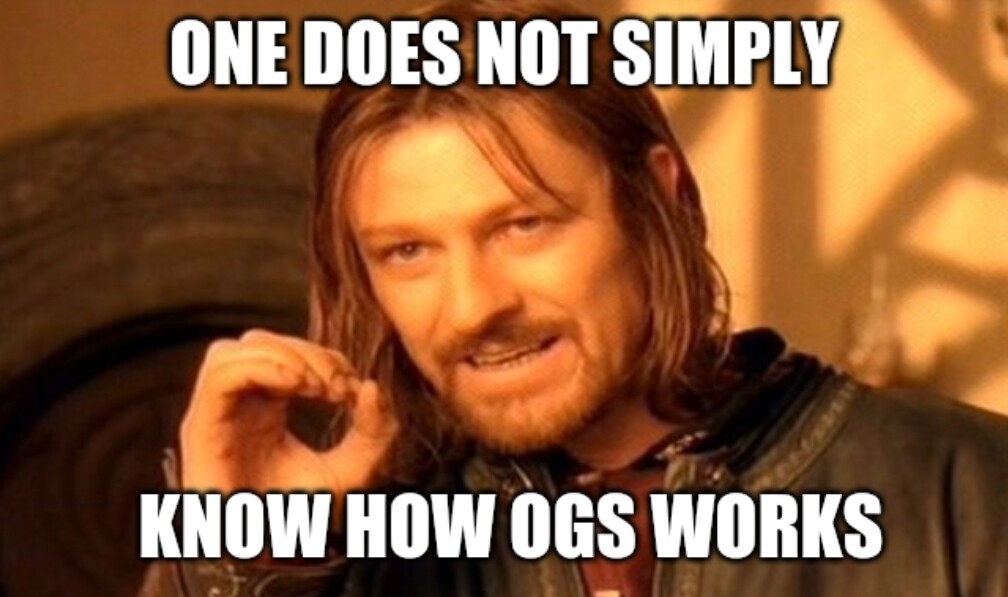 Theres indeed something weird going on with tournament handicaps, it does weird things…

I’m playing on double-elimination tournament with auto handicaps, playing with the same person twice.
On round 3 i got 6 stone handicap, now on final round i’m playing white while still being 6 stones weaker xD