In this game black realized that he was in deep trouble at move 8, and correctly decided to break up the Great Wall with 9.

How should white respond to this? Would you play anything else than white 10?

I don’t think black was in deep trouble. I think you can let white have their Great Wall and just play territorially, enclose corners. Try not to play too many running fights into the centre where whites centre stones might help.

But black strategy is interesting too, disrupting the great wall in half.
Locally w could try a supposed favorable fight with the intruder between his 2 stones but in fact I don’t really see a way to do it. AI suggest to not bother and go direct to the corner …

I think Black should not have claimed the fourth corner. Occupying four corners is not enough. White can attack anywhere from the centre. And then four groups could become easily six groups. Remember the go proverb: if you have six groups, one is dead. However another go proverb says: If you have lost four corners resign.

So what would I have played? Bombarding the the great Chinese wall preferably at two or more places.
Looked like a real interesting game.

How should white respond to this? Would you play anything else than white 10?

You’re assuming that the great wall is a good strategy for white, perhaps it isn’t.

I always thought it was a strategy only black could pull off, white has the trouble that all corners are claimed before the wall is even completed: black can break the wall with their 5th stone.

Not that it is excessively good for black either, LeelaZ tells me black has only 20% winrate with the fuseki.

There is black hole bot on computer go server
http://www.yss-aya.com/cgos/19x19/cross/black_hole_v6.html
And also some older versions. This bot does win games vs katago, LZ and other strong bots so probably not bad for your gameplay inspiration needs.
Interestingly it ends up somehow stealing corners in quite many games despite always starting in the center.

We need a Great Wall bot so

Ah, it makes sense. If you play the Great Wall and invade the corners, don’t you get both the corners and the influence? Normally one player gets the corner and the other the influence, but you already have the entire center.

I just remembered that we have a 3 dan player who always plays this fuseki as black and white: https://online-go.com/player/755638/ I will look at his games during the week.

Anyway the idea was to harass the group a little, build up the bottom, and then come back and harass it some more. Like @Goule suggests. Unfortunately the game timed out, being 10 second / move sudden death blitz.

Black has the better position by simply continuing with normal moves in the corners from Move 9 onwards, eg. D17, R16, R6, O3, and C4. No special strategy is needed to combat the Great Wall.

In theory anyway, although stranger openings have been linked recently 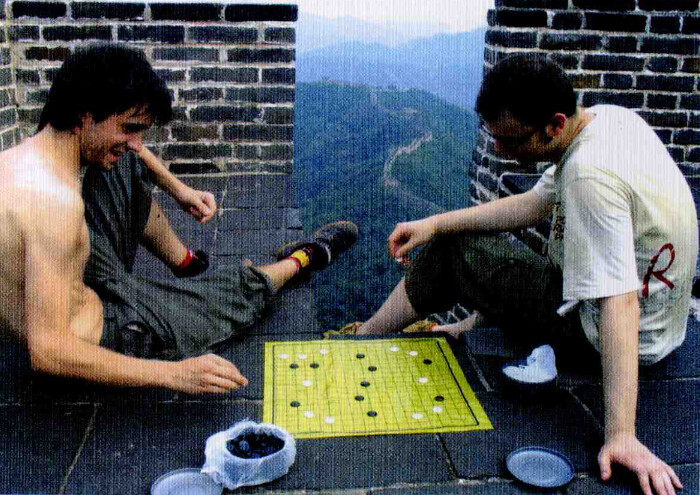 I found another photo, with thanks to Phelan on SL.

This was taken during the World Mind Sports Games in 2008. 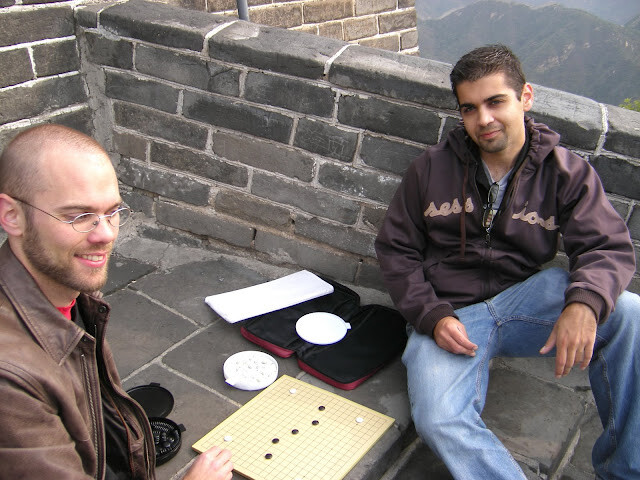