Staircase Go: Intersections in the i-th row are worth i points

What actually happens with mirror go in this variant? Would black win by 1 point without komi or?

Mirror go can be broken in all the normal ways, although the considerations on how to to do it in the best way (without giving the opponent a good chance to stop mirroring after making you play some bad move) would be a bit different from usual.

If black opens on tengen and mirrors for the rest of the game, and white doesn’t break it, black will win by 10 points (the value of tengen) assuming no komi.

I can’t do numbers today. 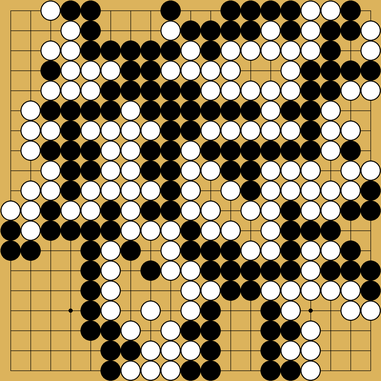 We used a pie rule instead of komi: Martin decided that G7 would be the first move, and I then decided to take black.

Edit: It was an exciting game! Things started in the center and moved outwards, as expected in this variant. Martin was ahead by alot in the middlegame, but towards the end we got into a close capturing race which I won by 1 liberty. The final score was B733 - W597.

If anyone else wants to try this variant, the scoring tool should be pretty easy to use - just click (or click and drag) to place stones, hold down shift to place white stones. Territories are detected automatically, but you need to remove all dead stones from the board.

Other board sizes should be working as well, just add the size to the link like so:
https://pyramid.4tc.xyz/?size=9

I’ve been thinking about how this fun alternative scoring rule could be extended to any board (in other words a general graph). I have an idea in mind but would love to hear your thoughts about it. What do you think about this proposition?

The distance of two vertices v, w of a connected graph is the length of a shortest v-w-path.

The excentricity of a vertex v is the maximum distance of v to another vertex.

The diameter of a graph is the maximum excentricity among its vertices.

Does this definition give the same values for square boards as your original proposal? I’m not sure if I’ve understood it, and maybe something simpler to understand would be better. Could you provide some examples to justify this particular choice?

Does this definition give the same values for square boards as your original proposal?

I thought this is the case but now that you ask I believe it may not be the case, let’s see …

The diameter of a square nxn board is the distance of two diagonal corner vertices, i.e. 2(n - 1)
Lets say n is odd, then the vertex of minimal excentricity is Tengen with ex(v) = n - 1

I think the point values would form this pattern: 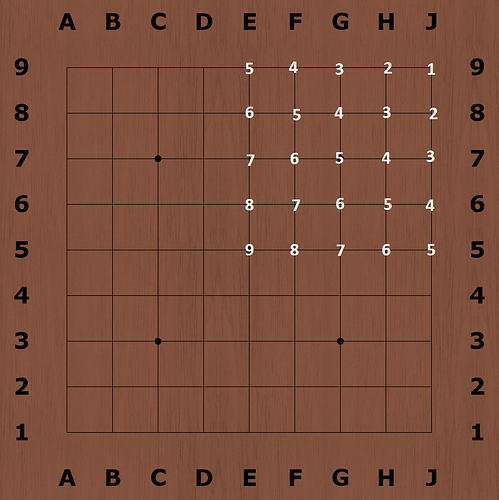 … so unfortunately its not compatible with pyramid go

But it’s applicable to any graph.

To be clear, this is not my original idea. See for example https://en.wikipedia.org/wiki/Graph_center

This certainly seems like the most natural generalization of the “pyramid” idea! (even though it doesn’t quite agree on square boards, it’s obviously very similar)

And for a disconnected graph it seems most natural to do the same thing component-wise.

In the other thread I shared various move frequency diagrams from the 100k-sample, here is one using all 10 837 323 non-handicap 19x19 games in the dataset: [image] Click on the image for an interactive diagram where you can move the slider yourself to see the frequency throughout moves 1-300 animated, it’s quite pretty to look at! Edit: The site where I hosted the diagram updated and now the data is super slow to load for some reason, so the page will be blank for a minute before the diagram…

If you made the scoring for an intersection in some way opposite to how early it tends to get played in a game, one could get some sort of anti-go, at least in the usual learned sense

If instead of generalising to any graph, you generalise to any graph which has a boundary, then it becomes easier. The value of an intersection in pyramid-go is simply its distance to the boundary.

You can either draw the boundary around the board, or if your board is almost-a-grid, you can perhaps say:

I think the tricky and subjective part is still to say what exactly constitutes a “boundary” or even just which graphs could possibly possess a boundary in some reasonable sense. Various precise, mathematical definitions are possible, but whether they properly capture some intuitively understandable notion of a boundary is more difficult. I think it is a debatable issue, with potentially several different schools of thought. 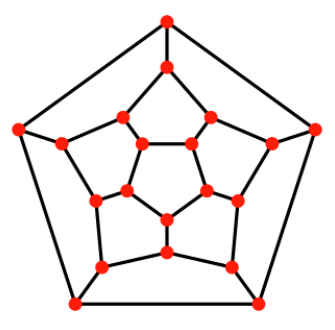 Every point is fully symmetric to another, so it would seem be to a case where a boundary does not exist. However, what if we modified this graph slightly to add a vertex and a few edges? 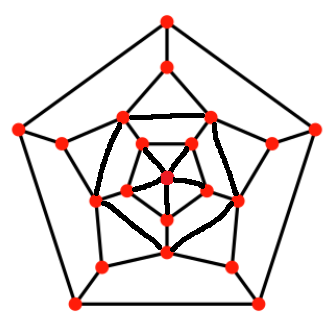 Does this new graph now have a reasonable boundary? Are the ten red points furthest from the center of the picture a proper boundary for this graph?

As another example, consider the graph created by the vertices and edges of a pentagonal trapezohedron (the shape of a “d10” die): 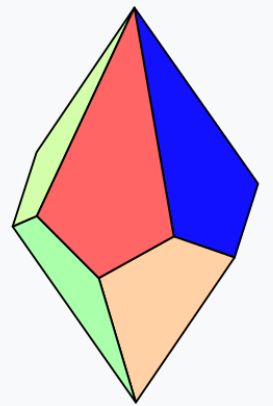 Does such a graph have a reasonably defined boundary?

Another simple approach for specifying “pyramidal like” point values to general graphs would be to (somewhat arbitrarily) pick one or more “central point(s)” and then assign values based on the distance from those central point(s). On a regular square grid, this could give the same effect as the general rule proposed by @martin3141 earlier, and hence this rule is not consistent with the original Pyramid Go.

I think @ArsenLapin1 was simply suggesting that we can decide for ourselves what the boundary is, i. e. we define a “graph with a boundary” to be a graph together with a special subset of vertices that we call the boundary.

Yes, exactly. I was talking about defining the boundary manually / arbitrarily.

As for using the vertices of a dodecahedron as the board (or equivalently, the faces of an icosahedron): the game Hunt the Wumpus is played on that graph.

Is the intuitive boundary not just the outside nodes/edges of your graph?

Whether one can always define an “intuitive” boundary seems tricky.

One can imagine defining it like a walk or path in the graph (not repeating edges) that as a curve is either a simple closed curve (so allow a cycle start point = end point) to which one can appeal to the Jordan curve theorem to define an inside and outside, and ask for all the vertices (not on the curve) to lie within the inside. The curve (edges+vertices) would be the boundary.

I guess the distance could be the adjacency from one vertex to another (minimal number of edges to join with a path) or something.

If that’s not possible, then every (or no) edge could be the boundary. Either way it’s probably not an interesting case for pyramid go.

Of course these rely on the presentation of the graph, not necessarily intrinsic to the graph.

In the most general approach, one could just manually/arbitrarily specify the point values for each vertex.

My point is just to ask which graphs would have a subset of points that could be reasonably called a boundary. I think it is unavoidably a subjective question for general graphs.

Is the intuitive boundary not just the outside nodes/edges of your graph?

Which graph are you referring to? This first one?

Of course, one could arbitrarily call the “outer” ring of five points in this graph as the boundary, but it seems a bit artificial, since the graph is symmetric and corresponds to the surface of a dodecahedron. One could also pick randomly one or more points and call those the boundary.