I’m a begginner starting to play Go. I play 5x5 for now.

I realized a messed up during this game but I don’t understand why I lost the game ? Can anyone comment ?

To me, I have one more territory and I also “ate” one more token that he did.

The apparent “eye” in the bottom right of the board is a “false eye”. See https://senseis.xmp.net/?FalseEye

Note that earlier white had played at the vital point of your shape, denying it the ability to make two eyes. See this article: https://senseis.xmp.net/?BulkyFive

Thanks for the bulky five explanation - I didn’t cross that one yet.

But since I managed to “eat” his two tokens placed in my “bulky five”, why was that a problem ? Since territory (in my mind) is worth as much as a token, I ended up with more points since I ate his tokens, no ?

and how is this considered a good move ? I played the red X, and the green circle is where the “game” thinks I should go. I only see myself losing a point here. 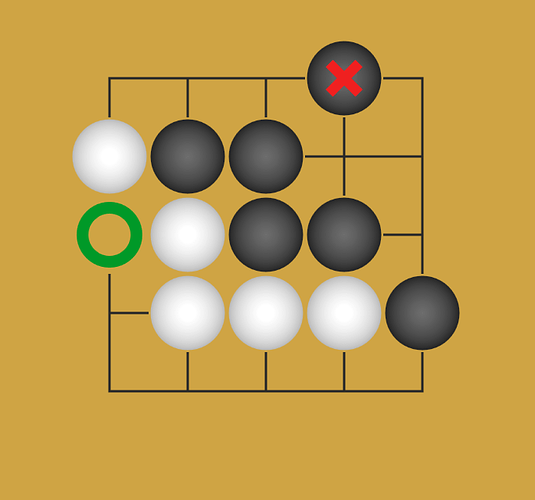 If you play at the circle, white has to capture your stone, or else it will lose the one stone that is in atari (and consequently the game). Playing at the circle is called a throw-in; it will create a false eye. 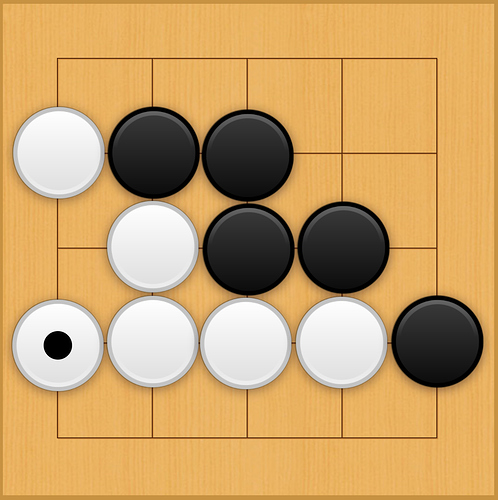 Next, white needs two eyes to stay alive, but if black plays well, it can prevent white from making those eyes. Note that the X marks a false eye, and at the bottom there is not enough space to make two eyes for white. 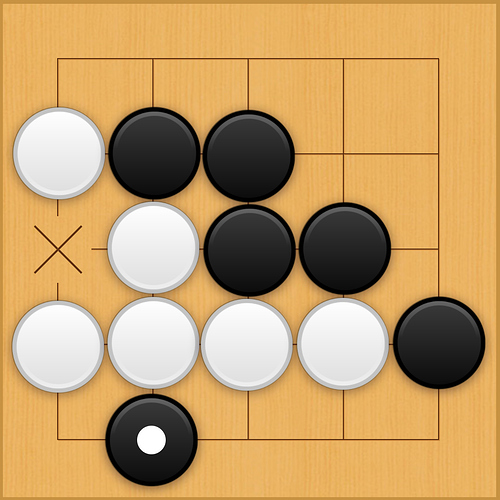 I feel 5x5 is a good practice for learning the rules and capturing, but things like eye space and living is probably more easy to learn on a larger board. Living on 5x5 can be tough because there’s so little space. A lot of situations will lead to seki or death.

The problem is that all of the black stones were ultimately dead (i.e., they could not avoid eventual capture). White sacrificed those stones in order to keep that group dead (prevent black from making two eyes).

At the end of the game (the first one that you linked), all of the black stones were dead, so white had all of the territory and many more captures. Note that in the cosumi interface, the capture of these stones are indicated by them being grayed-out.

To score a game, all of the dead stones are first removed and counted as prisoners for the other player.

Oh, where to start… Welcome to OGS

Interesting… Others might disagree, but I think 5x5 is actually more complicated than 9x9. I would start there…

and how is this considered a good move ?

Honestly, I think that is a little too advanced to start with too :D. AIs (computers) sometimes like to play these moves even when they are not necessary, but the first thing to understand is that you are not losing a point there. If white has to react by playing a stone inside his/her territory, he/she will get one extra point for the prisoner, but lose one point of territory (filled with his own stone) - if you are playing Japanese rules that is. Under Chinese rules, there are no points for prisoners, so the result is the same…

@Vsotvep beat me to the actuall explanation, but if it seems to complicated for now I would not bother with it. Sufice it to understand why it is not losing a point.

) or add me to your friends and ask for a live game iwhen you see me online.
Have fun playing

I ended up with more points since I ate his tokens, no ?

This depends on the rules. In Chinese rules prisoners (i.e. tokens that you ate) are not worth any points, but all territory and stones of your colour are worth points.

In Japanese rules the prisoners are worth points, together with the territory. This makes it disadvantageous to capture some shapes even though they are dead (such as bulky five), so the rule with Japanese is that you don’t need to actually capture dead shapes at the game end.
Only after both players passed, and they dispute whether a group of stones is alive, the capturing will actually happen, but this does not affect the score. It only decides which stones are dead (and hence prisoners) and which stones are alive. The scoring will happen on the position after both players passed.

I was confused by this as well, see this topic.

And as Adam said, if you don’t understand this, don’t worry too much about it. For beginners it’s safer to play with Chinese rules, since they are easier to understand. Then you don’t need to worry about prisoners or dead shapes that shouldn’t be captured.

After the throw in, black should probably play D5 to live, not B1. There’s no way for white to get two eyes and after D5, B5 and D4 are miai for black.

5x5 is definitely not more complicated than 9x9.

I could teach a beginner to play a perfect 5x5 in less than a day. I don’t even know how to play perfectly on 9x9 myself.