I believe the main blocker is that (a) there seems to be a mismatch in the ranks shown vs the ranks used in the algorithm and (b) it’s hard to reproduce on beta so debugging is a challenge.

But idk I think @turtoise was looking into this recently.

On that point - I wonder if keen people could/should set up some troublesome challenges on beta for testing this?

The good thing is that open correspondence challenges persist as long as you leave them there, so once there are a few good examples, the debugging should be easier…

Hello! I have been playing Rengo for the “Western Server Challenge 2022” and I have noticed two things:

I hope to contribute with my suggestions.
And I really appreciate all the work you do to improve the Rengo modality in OGS!

Just an update: it’s starting to look like this is a wierd kind of bug along the lines of “if the last person to depart happens to do so in the same turn as the second to last person, then the game doesn’t end”.

I’m not yet sure if this is exactly the right description, but at least it’s not as bad as “casual games don’t finish when the last person resigns or times out” (as confirmed by jlt’s example of one that did finish properly).

And I really appreciate all the work you do to improve the lame modality in OGS!

I hope to contribute with my suggestions.

It seems a strange method of contribution, to describe the previous efforts as “lame”. I wonder how you expect this will motivate people to take up your suggestions?

I’m sorry, I use the google translator to write here, and it translates “rengo” as “lame”. I already corrected it 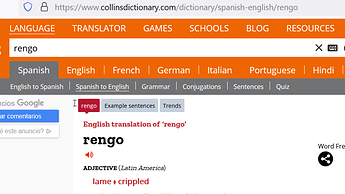 Thanks for the clarification and I apologize for the misunderstanding.

Thanks for your suggestions! I have some questions about what you want to achieve, which I will write later, just wanted to quickly acknowledge the humorous situation first

Thanks! I am very attentive to the news and advances of the RENGO(haha) modality in OGS

Why does this player appear on my list of games? He timed out at move 1 (so never made any move in the game).

Heh heh - “lame” is going to be a wonderful ongoing joke.

I don’t recall having “taken care of” what name appears there, so likely it is “a random selection from whomever was on that team at one point”, wheras I’d been hoping it would just magically work out to be “the person who is next to play”.

So this can be noted as a “bug”, but it’s well below a couple of other much more annoying bugs that have turned up in the last week

Since it’s the clock column, seems like we can just hide the player name anyhow

anyone up for an easy PR? 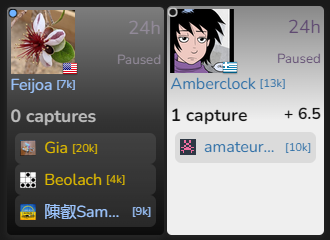 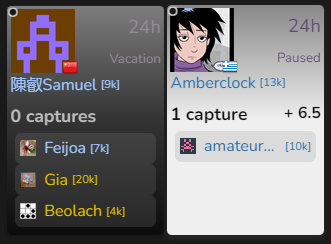 Yeah - there’s a funny thing going on there … they also show old avatars if you step back through the game.

I think it’s showing “what it was at the time the move was played”.

Does that match your experience?

The good news: this is client code, so you can check out what on earth is happening. I distinctly recall something odd having to be done right in that area when implementing the whole “step backwards” thing, but I can’t recall why it had to be done

If you go looking in there you’ll see what I mean.

I see my flag from about two weeks ago in a move I just made. Maybe it’s from the start of the game? I’m surprised that OGS has a cache of old avatars and flags anywhere though.

Probably already mentioned before but after I resign from a lame game that keeps going without me, I no longer want to see it on my home page as part of my ongoing games.

I currently don’t have any plans to do anything about that, because I consider the
whole business of being able to drop out of Rengo teams as problematic.

In theory, when you sign up, you’ve agreed to be part of a team till the game is over.

The feature where “the game doesn’t end when someone abandons it” is not there because “people might get tired of a game they signed up to play, so they should be able to drop out”. I don’t subscribe to that idea.

The game doesn’t stop when you resign because we currently don’t have a way of “registering your resignation but continuing anyhow until everyone else agrees that resignation is correct”, otherwise known as “concensus resign”.

If we had concensus resign, then when you hit the resign button you’d still be playing, until your team members all agreed it was time to resign.

(Another more practical reason why changing this is not high on my on personal list is because I don’t know how to achieve it, and I’m not especially motivated to find out

The feature where “the game doesn’t end when someone abandons it” is not there because “people might get tired of a game they signed up to play, so they should be able to drop out”. I don’t subscribe to that idea.

Looking at it afresh I can see that this is what it seems like “surely it is for that”.

It makes casual games even more casual I guess. “This is so casual I can leave whenever I feel like it”.

Sigh. I dunno: we could actually easily enough fix, in the front end, the problem of the game appearing in the active games list. I’m just don’t know if it is equally easy to fix the “games I’m in count notification circle thing”.

If that too could be fixed in the front end, maybe I’m leaning that way afterall …

… but is is really that big of a deal?