This sounds like a fun idea, I’m in for one game and PMed you.

How about making an OGS group and inviting everyone who signs up so we can have some sense of the scale of it and find games in progress to watch?

How about making an OGS group and inviting everyone who signs up so we can have some sense of the scale of it and find games in progress to watch?

Good idea. It’s still pretty bare-bones, but the fundamentals are there.

Lagrange Points is a Running Reverse Komi Arena featuring live games with flexible scheduling on a tri-weekly basis. If that sounds like something which would interest you, check out the [forum post](https://forums.online-go.com/t/34809) for more...

How will you determine the komi?

I think OGS would call that a “handicap 1” game with no extra stones and 0.5 komi.

A “1 stone handicap” actually only accounts for a 0.5 stone difference in strength: stone handicap games being played with -7 komi would be more consistent.

Imagine a no-komi game between equal players: Alice and Bob. Alice takes Black and wins the first game by 7 points, as expected. They switch sides with Bob taking Black and winning by 7 points. The swing between these two results is not komi, as would be implied by taking a full stone difference in strength to be worth a “1 stone handicap”, but twice komi.

Katago also gives roughly twice komi as the value for an extra handicap stone when evaluating in Japanese rules:

I think OGS would call that a “handicap 1” game with no extra stones and 0.5 komi.

A “1 stone handicap” actually only accounts for a 0.5 stone difference in strength: stone handicap games being played with -7 komi would be more consistent.

I think you are both right.

1 handicap stone without komi, falls short by komi or half a stone, in a game between players separated by 1 full rank.

Got it. And OGS apparently rounds the rank difference down, so e.g. a 3.1k vs 5k player would still get just the 1 handicap. This tournament’s system seems like it could be a lot more accurate.

It’s a lot more precise; whether or not it’s accurate to match depends on a variety of factors, though it seems about right so far: I’ve won and lost games using this komi calculation.

Ah, yes. I remember that now. OGS doesn’t expect black to win 50% in those cases. So my statement was inaccurate.

Edited: sorry, description of the statistics below was wrong.

In the EGF rating system, even games between players separarated by 1 rank difference shows the following trend for weaker player win% (sampled from 2006 until now):

In the EGF rating system, 1 handicap stone for 1 rank difference shows the following trend for black’s win% (sampled from 2006 until now):

It looks quite interesting so I’d like to join. Also, I like the scientific vibe in the chat: it brought me back to PhD times.

Good luck to all the participants; I’m looking forward to both playing and watching some great matches.

As mentioned in the OP, pairing rules are in flux.

I am particularly interested in players thoughts on how the current pairing algorithm worked out and if/how it should be changed.

For this round I rejected reverse komi values of more than 240, but I think limiting it to 120 (1/3 of the board) might be interesting if players want less extreme komi since that is a simple fraction which corresponds to 8 stones and 8 points, which is remarkable close to the highest official handicap: 9 stones. That said, I have played reverse komi games of almost 361 points and they do work, though as one can imagine it at that point does come down to whether or not the weaker player knows how to live in a corner against strong resistance, so there is a bit of degenerate behavior; I think most ddk players could beat anyone with a reverse komi that high: play 3-4 and capture a cutting stone.

Should players be required to have recent ranked games? For this round I only made sure players were non-provisional, but requiring participants to have completed at least one ranked game (live or correspondence, any board size, any rules) in the 3 weeks leading up to the round they’re signing up for might have benefits if players feel participants are not ranked accurately. I don’t know if this is really much of an issue: I updated the ratings for each player before generating the pairings and most players had some rating change since they signed up anyway.

Looking forward to it! I’m only wondering if you know @riiia’s forum name? I messaged on the main site but that make is not recognised in the forums. I’m worried I might miss messages via the main site but will keep an eye out.

I don’t believe I’ve had contact with them on the forums so far.

Have you tried searching for yourself on OGS?

I would like to present my 167 komi game against @wurfmau3 as evidence that larger differences work fine: 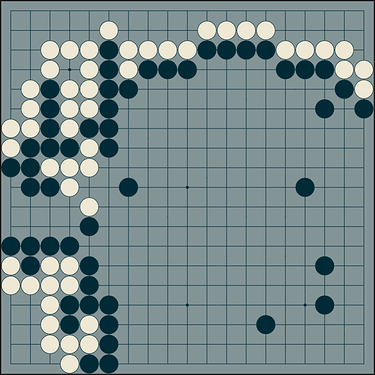 I opened with 3-3 points, tried to play extremely conservatively, keep everything connected, not make any corner shapes that had any chance of being dead, etc. Kept counting the score during the game and tried to estimate how much more territory I needed to grab to win, but I didn’t quite make it. Looking forward to the next round!

Registration for round 2021-2 (2) is now open! If you are interested in participating again this coming round, or want to join in, contact me with your OGS username (and preferably with a link to your profile, especially if you have non-ascii characters in your name) and the number of games you wish to play by Apr. 5 EST.

And is there some kind of leaderboard or divisions from round to round?

There will be a rating system based on the Japanese Points Rating System, assuming I can fix the bugs over the course of the next week.

For those who participated this round, here are some polls.

Should Low Komi be Avoided?