Thank you for reading.

Yeah, I find myself going back to the original game to the relevant position to get the estimate when I encounter this.

I end up having to do the same too. I just downloaded sabaki (After some figuring out how too…im not the most tech savvy)… but i like the OGS reviewer… and i really think it can be improved immesurably with just adding the score estimator… It would also be great to use as a tool for making a reveiw in and of itself, showing score differences, shoowing just how big certain moves can be, and indeed the cost of some mistakes.

Really the potential for its use is only limited to a persons imagination with it i think.

I apologize for bumping an old thread. Is there a way to estimate score on analysis, as of 2019?

Hi @tassion, coincidentally your question was asked just a day ago! I moved you question over to that thread to keep modern discussion of the topic separate and unique from its state 2 years ago

Currently there isn’t. Which is why only a day or so ago I found myself writing the suggestion above. Seems to me that this isn’t a new issue? @BHydden is there anyway to get an idea of this is indeed something that can be achieved?

I do however understand that there is always something that needs doing on OGS, and that this may be somewhere near the bottom of the lost of things that need doing. Which is absolutely fine, especially as OGS has done so much to improve itself over the last few years alone.

I can’t really see why it shouldn’t be possible. Someone also made a github issue for it https://github.com/online-go/online-go.com/issues/954

As you say, I think the biggest hurdle would be snagging attention from one of the coders. Apart from anoek, we’re all volunteers and basically work on whatever we feel like

the only thing that is missing in the review game feature is the ability to have the score estimated.

I mean: we miss a SE that really works!

The main feature about that would be the ability to change life/death status of a group. That’s where SE often fails and where the estimation becomes useless.

I would just turn off estimation after first guess and let the player adjust what’s wrong. Dwyrin does that sometimes in his reviews but I don’t know which SW he uses for that.

You can change the live/death status by clicking on stones.

I’ve found that to be buggy, in both display and function, and for both desktop and mobile…

Score estimate can be made to work better on desktop by holding the Ctrl button then clicking on the stones that are dead untill the estimator recognises them as dead.

The issues being not recognising dead groups, and when clicking on any dead stones not completely surrounded and sealed, then making everything either appear as alive or all totally dead.

That being said… (@lysnew) A better SE would be a nice thing to have. But I would settle on being able to use the SE in the review game feature.

by clicking on stones.

Click, shift-click, ctrl-click… I gave up some time ago. Did anything change recently?

BTW, I’d really like to know the program used by Dwyrin. Maybe I should provide a screenshot

Thanks @BHydden! I had not noticed that @Lord_o_o_Spoon had brought this up recently.

Maybe I should provide a screenshot 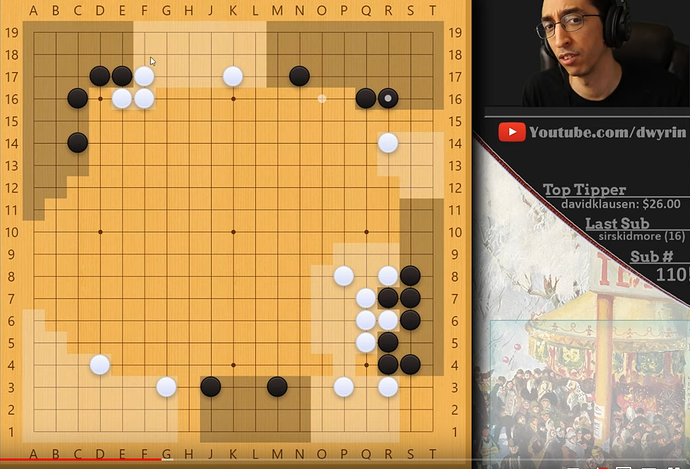 He is using the “elegant Go board and SGF editor”, Sabaki. I recommend it.

Bumping this thread. It is frustrating that you cannot estimate score in reviews! This feature is present on KGS, and is quite useful.

It’s well down in the priorisation anoek did late last year, after this thread.

The most recent new coder I’m aware of is @ofekih … maybe they might be enthused by this.

Personally, if I were to work on the Review function, I’d fix up the ability to chat about positions sensibly well before I’d worry about estimation.

Damn, didn’t know there was a kanban board for ogs. Sure, I’ll take a look at enabling the score estimate feature when reviewing games. My guess is that there was some reason why it’s not present that we don’t know about, otherwise why wouldn’t it be enabled already, it shouldn’t affect the code, right? I’ll take a look this weekend.

What do you mean the ability to chat about positions sensibly?

Someone is actively working on this. See this thread