Is there a Polite way to say that game is already decided?

I use score estimate very often

Did you already notice how much it can be wrong?

Almost always, but still a quite nice tool if you go through his failures… In some way should even be considered as using an external help (like a teacher or an AI) so indeed against the tos (Sorry Gia I didn’t mean you intended to cheat with it) But I digress, I’d better open a topic on that.

I use score estimate very often

Did you already notice how much it can be wrong?

Do you both know that you can click the SE repeatedly to get different estimates? Sometimes VERY different, for that, especially when there still are many holes in the borders, unsettled groups, “no-man’s-land”.

Also, IMX it’s best to FIRST use the analysis feature and to close all open borders in that mode, and THEN use the SE for a more reliable estimation.

Differences between several scores can be as much as 10 to 15 points in a 19 x 19 game. The closer you come to the end of the game (sudden resignation excluded), the differences tend to become smaller and more reliable (closer to the final game result).

As long as you realise this, the score estimator (SE) can fulfil a role in your game.
Don’t rely on it too much however.
So please don’t start a topic “the SE said I would win, but now I lost the game”.

you can click the SE repeatedly to get different estimates

I don’t often do that, but when I do… 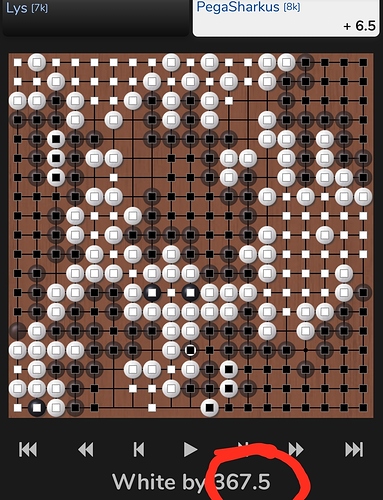 maybe next time don’t kill your own stones.

don’t kill your own stones

I can’t see dead stones in the picture.

Here is another one.
SE says black is winning by about 20 pts.
I clicked on the white group on the left because, as black, I don’t see a way to kill it (don’t tell me if I am right or wrong).
Then here is the result: 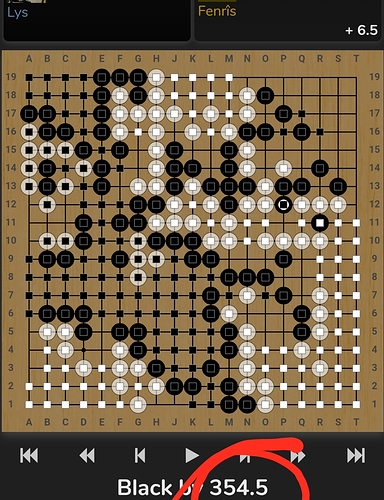 I think what happens is that the group is marked dead, but the score estimator doesn’t update the view on the board.

Because little squares seem to say that score isn’t at all 361 ± komi.
I would expect to see only one colour when score is that one.

Moreover, if I change life status for just one group, why should it become “all white” or "all black "?

I think we should split this topic if we want to discuss SE. We are way off topic.

I think we should split this topic if we want to discuss SE. We are way off topic

agreed. I kinda click on it each time expecting something different, forgetting we were talking about that in here.
@trohde maybe

nope, not over the stones, but you can do so over the board.

An example from my top game:

With just marking all black stones as dead: 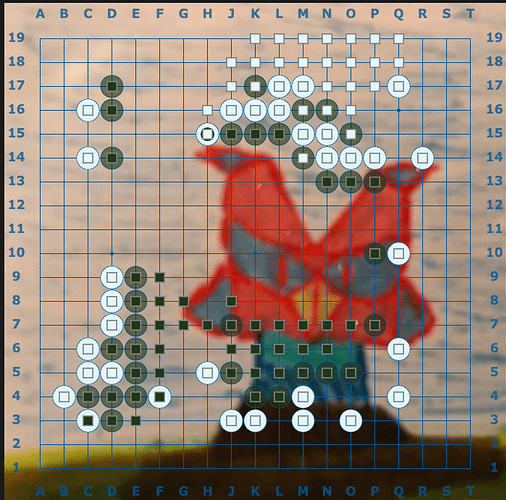 After coloring most of the squares in(I just realized I missed square L1 and R8): 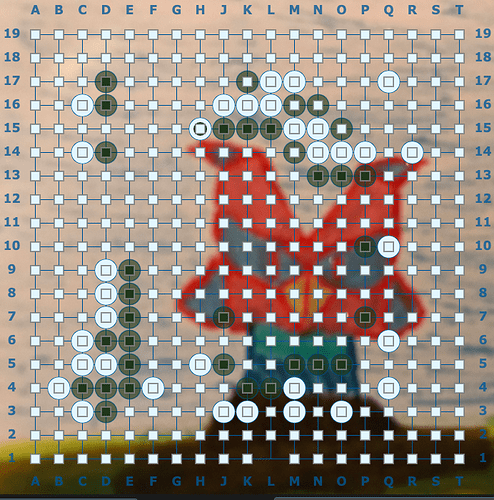 Score doesn’t change but the visuals kinda do.

Kinda fun to mark all of my stones as dead. Doubt that will happen but I can see that outcome now

Interesting, I’ve never had it that the SE was THAT much off

I wanted to split topics, as suggested by @Lys (and thx for the <ping>, @Haze_with_a_Z), and that went well at first, but then I realized that I should’ve moved a few more earlier comments also … and when I moved them also, they were appended to the new thread … so I tried to move the later ones to a new temporary post and then append them here but that didn’t work.

<edit> I think I’ve repaired it … was a PITA shoving comments to and fro, and repairing also the then-broken links in the original thread, but I think it’s all fine now

Kinda fun to mark all of my stones as dead.

My aim wasn’t to mark all stones as dead.
I would like to be able to tell SE that a group is actually alive when it marked as dead or vice versa.

If I click on the board on my smartphone the result is inconsistent because score and marked points tell two different stories. So it’s useless.

The only way I know to force SE counting right is filling all borders and completing the game. But it’s quite boring and time consuming and also could be affected by mistakes in choosing the order of endgame.

In this game we still have to settle status for the small white group on the bottom side.
There can be a ko involved.
But at first SE thinks it’s dead and black is winning by about 13 points. 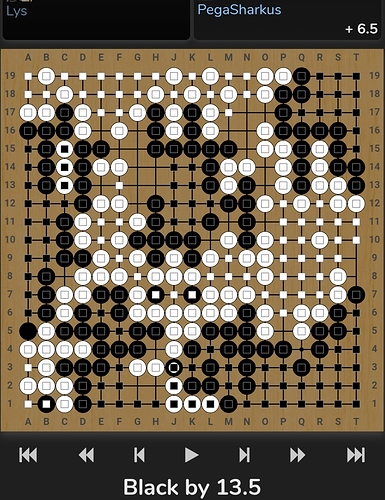 The problem is that the bottom area is worth more than 13 points. I wanted to check score without those points, so I tapped on the white group. Expected behaviour: white stones are marked as living, black squares near to them disappear, score counting changes accordingly. 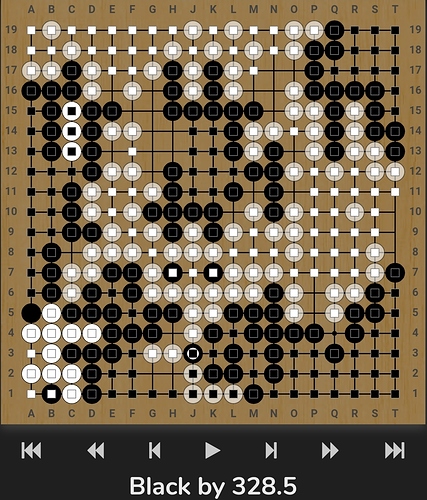 All white stones in center and top are now transparent and counted as dead BUT white’s territory is still marked white.

I then tapped again on the white group on the bottom. Score comes back to previous estimation BUT now white stones are marked as dead. 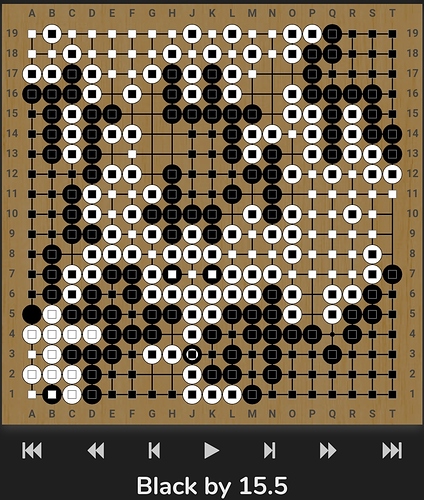 I must look for some kind of ctrl-finger.

I am using only smartphone so I can’t actually try other keys.

Platform-dependent?
For macOS it seems to be option+click (ctrl+click summons the context menu, system-wide)

yes, the SE shows different results almost every time, but it also shows the EXACT area that the score is based on. That means, if you do some manual adjustments, and not just taking the SE result literally, you can get some pretty informative number from it.