Story Behind Your Username and/or Profile Pic?

Would you be able to post some of your more favourite pieces for us?

First time I made someone nerd rage over a video game was ninja turtles on nintendo. I stole the pizza when he was low on health. I don’t troll often but when I do it warms my heart for a long time.

When I needed a username for League of Legends, I used rinkworks.com/namegen and got “Samraku”. I started using it in more places, and by the time I joined OGS, it was my default go-to.

A long time ago a dan player teaching me commented that I was always playing too aggressive, like I want to fill the whole board with my color only, and that’s unreasonable.

It just so happens that I like my electronic devices (computer/phone etc) purely black and I was playing black at the time, so being weak as I was I thought “what’s wrong with that”?

Some years later I was learning mahjong rule with friends and there’s this a winning hand named Chinitsu meaning “purely one colored” and it reminded me of the comment before. It was kind of a bittersweat memory because then I realized how naive my thought was. So the Chinitsu name kind of stick on my mind.

I use the nickname to warn my opponent that I didn’t come to negotiate peace to remind myself that I shouldn’t be too aggressive.

What an interesting thread. ty @RubyMineshaft

Kosh is an enigmatic character from the Sci-Fi series ‘Babylon 5’ of which I am obviously a fan, though Kosh is not my favorite character. So why ‘Kosh’…

Very, very early in my Go journey I came across the famous quote by Edward Lasker:

The Spirit of Go?

While the Baroque rules of chess could only have been created by humans, the rules of Go are so elegant, organic, and rigorously logical that if intelligent life forms exist elsewhere in the universe, they almost certainly play Go.

and the idea of Aliens playing Go appealed to me enormously. I find beauty in the idea of crossing interstellar space in generational ships or years of cryo and then sharing a game of Go at the other end with a complete stranger completely alien being.

The day may come when we need to reach for the stars simply to survive but what’s the point of that without something to appreciate in life.

Still, there are many aliens that would make sense as a Go playing avatar, not least this guy: Go Memes! 🧐 and I’m sure Emperor Palpatine honed his political skills on the Goban. So why ‘Kosh’? Simple; Kosh is already an avatar, a mask for the being within which is never fully revealed throughout the series. Using the name of Kosh reminds me daily to be thoughtful in what I post or comment. I say much more than Kosh would and I fear I play much worse than Kosh would but the use of the name allows me to aspire.

Back in my first years of High School I did something quite embarrassing.

Perhaps I was rather awkward and silent at the time—not that I’m no longer either of those things to some degree—but I hardly spoke, even to friends, let alone discuss anything that was of my interest.

So I created an email for a fictional person and talked to one of my friends through it. It was a foolish thing to do, obviously, and got discovered pretty quickly (an event that was never to be spoken of again). I’m guessing that friend has already forgotten about it.

Anyway, I had chosen the name ‘Ariel’ for its androgynous nature: you cannot really tell the gender of the person by that name alone. It also sounded kind of mystical, like an angel’s name (I may have been watching Evangelion at the time), thus their surname was ‘Saints’.

Several years later, when choosing my KGS account, my go-to usernames were more than 10 characters long, and Ariel Saints popped into my head. I was still rather fond of my little creation, so they were resurrected in a way. It became ‘Leira’ by palindromic reversal.

Nowadays, I’m merely amused by how often I get misgendered, and the dismay some feel if they find out. Maybe I chose that name too well, but it’s probably not really misgendering if you do not mind. I will make no effort to prevent this.

EPILOGE: Ariel Saints canon has shifted over the years. Their surname in particular is a matter of much revision. Currently, they would go by ‘Ariel Mont’; I wonder if someone will realize why.

If your kids grew up with The Little Mermaid, “Ariel” is female, for sure.

Hehe, but I do not have kids. I grew up with The Little Mermaid.

I thought of that scenario after I posted LOL

Another OGS Forum exclusive here, never told anyone this before.

Way back when I was 11, I started working on an album of music. It included such amazing tracks, such as Warpspeed, Satellites, Horizon, and Space Whale. (Still haven’t finished that album.) I had to come up with a name for it, and I thought it should be something space-ish.
Anyway, I went through like 12 different names, and rejected them all because they were all about as stupid as I was then

Anyway, a month or two later, I needed a username for a certain website I will not name… (YouTube) (whoops, just contradicted myself

) and I couldn’t think of any, so I thought back to what I did earlier that year. and, so I adopted that username and dealt with it.

At this time, my OGS username was Moon Base, because I thought that would be cool. Again, I was 11. Not the brightest. I didn’t like that for some reason or another, so I decided to change it to my current username. And that’s the username I’ve had, for… almost a year now.

Here’s a story about why my previous username was Moon Base:
So I had just read this book series about a moon base
I was writing a song
I used a drumbeat from the loops library called Moon Base Beat or whatever
I thought it was cool
It would shorten Moon Base to Mo…ase and my sister was obsessed with moose at the time, so I changed the name of the beat to Moon Bose Beat or whatever so it would be Mo…ose
I named that entire song Moon Bose
Except then I found a person named Moon Bose
So I renamed it Moon Coze
I kept that as my OGS username for 30 days before changing it to Moon Base because I thought Moon Coze would be confusing
To this day I still have no idea what a Moon Coze is
(Here’s the song in question, if you’re wondering. Not my best work, but it was pretty good for when I was 11.)

Edit: It appears I accidentally used a waffle emoji. That was a mistake. I repeat: THAT WAS AN ACCIDENT. I DID NOT MEAN TO SAY WAFFLE!!!

It appears I accidentally used a waffle emoji. That was a mistake. I repeat: THAT WAS AN ACCIDENT. I DID NOT MEAN TO SAY WAFFLE

What did you mean to say?

I have no idea

(Here’s the song in question, if you’re wondering. Not my best work, but it was pretty good for when I was 11.)

That is not bad at the slightest! You are really talented at least from my point of view!

Just for reference this is what I made when I’m 31: https://soundcloud.com/avavt/oom?in=avavt/sets/techkids-night-jam-1

It was after 1 week of learning composing from youtube tutorials, during my old company’s “Men of all talents” competition series.

I think none of the other entries come anywhere close to your piece as well!

(Here’s the song in question, if you’re wondering. Not my best work, but it was pretty good for when I was 11.)

That is indeed seriously impressive, and I was already impressed by your mathematical prowess!

It is an empty link

Try this: https://www.tinyurl.com/115Serenity
don’t see how that could go wrong

Not sure if my username story is that interesting, I used to get called Lazza at work and added the tron because why the hell not.

You might be more interested in the story behind my icon picture. It’s the fourth card from a homemade tarot card deck that I began illustrating last year. Having never done any drawing before, I was looking for a project to do to improve my skills and decided to illustrate my own tarot card deck because I find the symbolism behind the Tarot quite interesting.

The card in question It is the fourth card in the series: The Emperor, It normally shows an old guy sitting on a throne wearing a suit of armour. That obviously wasn’t sci-fi enough for me so I decided to set my emperor on Arrakis from Frank Herbert’s Dune. It shows a fremen father and son standing in front of a throne set in the rocks, they are surrounded by dunes and you can see the two moons of Arrakis and the setting sun in the background.

I had a lot of fun with this project as I had never really done anything creative like that before and I was learning throughout the whole process. Some of the illustrations were better than others but I always liked this one the most as I like the composition and colours (and its Dune!!!).

So really I guess for me my picture is much more important and personal than my username, which is liable to change at any time. 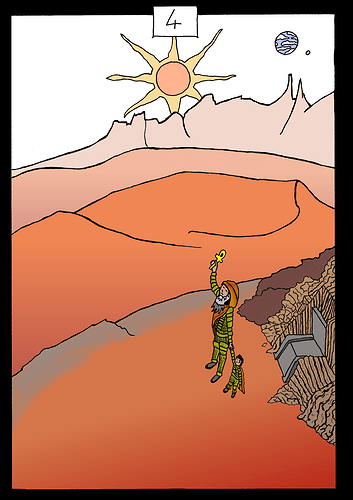 I’d be intrested to hear if anyone else has a story behind their icon picture to go with their username.

This is really cool! I’d love to see more of your deck, if you’d be interested in sharing.

I’d be intrested to hear if anyone else has a story behind their icon picture to go with their username.

Mine is a grab of an optimistic/uplifting looking kind of image - people looking in wonder at butterflyish kind of things - from a David Gilmour website - my favourite guitarist. The page with it on disappeared not long after I grabbed this actually, or at least, I’ve never been able to find it again!